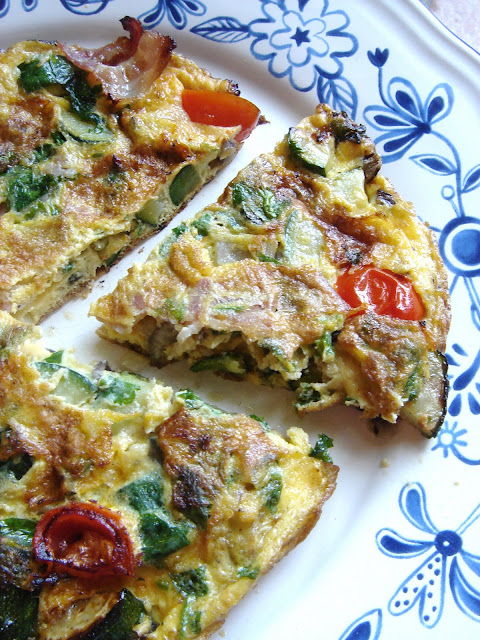 I am taking a break from blogging about Rome. In the past, I would just visit a place, take a few pictures and eventually have them printed and archived in an album. Ever since I've started blogging, I re-live my trips on my blog and that's like travelling all over again - and just as time consuming. Though one doesn't burn any calories this way and often ends up with no photos in the album.


This morning, I made brunch for the kids and a Zucchini and Bacon Frittata for myself. A frittata is an Italian stuffed omelette and unlike its French counterpart, often has its ingredients cooked first in the pan before having the eggs added. The eggs for a frittata are also usually well-beaten/whisked to incorporate air into them so that they would be more fluffy. Finally, the top of a frittata is usually bronzed (either by flipping the omelette in the pan - difficult - or by finishing the preparation under a grill in the oven). It's much easier to prepare than a good and light French omelette whose preparation is a Science in itself. And it is just as delicious. You can use whatever you like e.g. cheese, meat, vegetables to stuff it with. 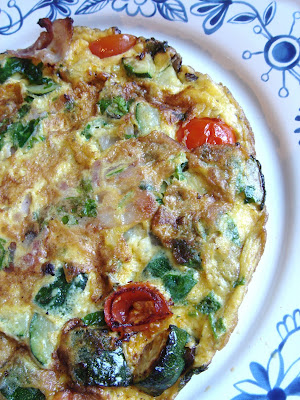 
Heat up a small frying pan and fry the bacon in it. Once a little oil starts to seep out of the bacon, add the zucchini and onions. Drizzle some olive oil over them. 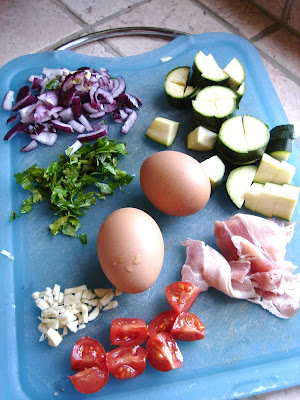 When one side of the zucchini is bronzed, turn them over to be cooked. Add the garlic.


Add the tomatoes and gently stir them into the rest. Sprinkle the parsley on top. Add salt and pepper to taste.


When the filling is being cooked, crack the eggs into a bowl, add salt and pepper and beat/whisk till the eggs are fluffy. Pour over the filling in the pan.


A frittata is usually served sliced like a pizza. It can be eaten as finger food, an entrée or a meal on its own.

Mmmmm, that looks good. I can almost smell it from here!


P.S. You asked: "Out of curiosity, why weren't you off to drink your wine with the in-laws?" I often do but on this occasion I stayed in Paris to look after the cat - and have some time to myself.

Hi! So you're from Singapore. Nice to meet you. Thanks for coming to my blog. You've interesting blog, would like to come again.