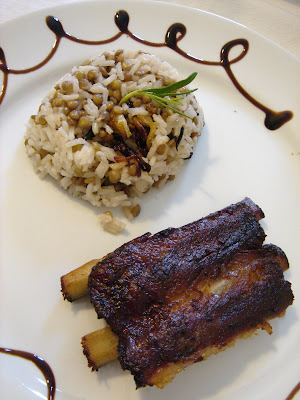 We had a good start to our Cookery Club with a first lesson presented by CT, our Brazilian professional photographer who can cook. It's a project we had under the sleeve for a few months now that only came to fruition this morning. Ordered by his wife, he shared his secret Pork Ribs recipe with us. Since it's a secret recipe now exclusive to our cookery club, I'm not going to divulge it to the general public. I hope that I'll not end up losing the paper with the scribbled notes (he didn't prepare the recipe for us as he should have). 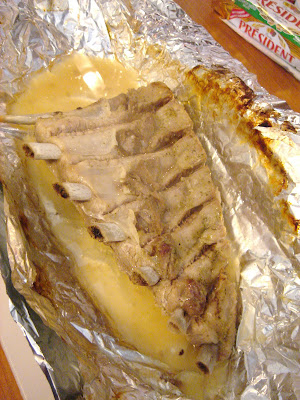 After 1.5 hours in the oven

OK, like I've said before, it'll be a hard act to follow after CT. He has better knife skills than most home cooks, he doesn't just tell you what to put into the dish, he explains why you have to do it this way and not that. It was a little difficult at times because of the language barrier, but we're a group of good-humoured ladies and after a few minutes of charades and cross translations (and a few glasses of red wine), I think we managed more or less to get the picture. 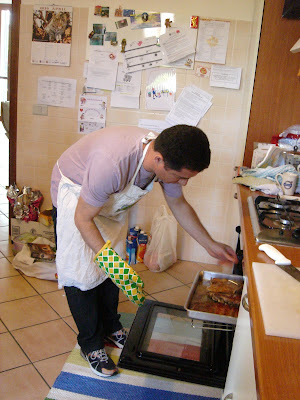 The rest of us should be a little discouraged after such a professional performance, but surprisingly, this seems to inspire, maybe even motivate, some of our members. JW has enthusiastically offered to be the next member to do a lesson. In 3 weeks, we'll learn more about English cooking. How about something with a spot of er...gravy? 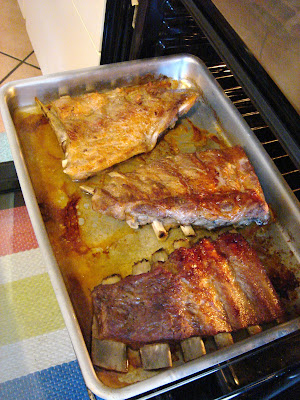 More than 10 minutes under the grill

Getting out of the door, who did we meet outside the house opposite CT's? The paternal grandfather of CW, a Chinese boy in my girl's class. This world is so small it's scary. I took the opportunity to invite myself for a tour of his house, as they have been renovating it and his mum has mentioned once about placing restored old Chinese furniture all over (they import and sell Chinese furniture). Very nice. Old man's very talkative, interesting stories :-).
Publié par Beau Lotus 涟 à 17:12