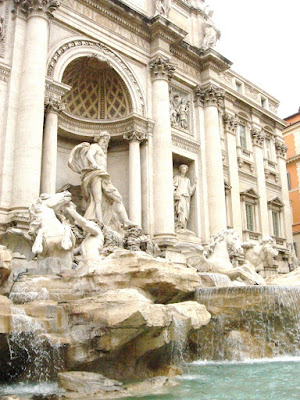 Trevi Fountain, Rome
On the way back from the Colosseum and Foro Romano, we decided to visit the Trevi Fountain. There is no way one could leave Rome without visiting this famous monument - unless you do not count on returning. For the custom is to throw a coin into the fountain (over your shoulder with your back to the fountain) to ensure that you return to Rome. Throw a second coin and you can make a wish. 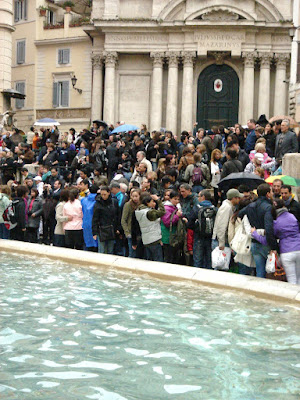 The teenager throwing his coins

There are other versions of the legend, including one about 2 coins leading to a new romance and 3 to a divorce or marriage. And apparently some say that you have to throw the coin with your right hand over your left shoulder - or was it the other way round. In any case, I gave the kids (and the Hub) 2 very small coins each and I'm sticking to the return-to-Rome version. The coins are fished out and go towards some charitable cause, so it's not money wasted. 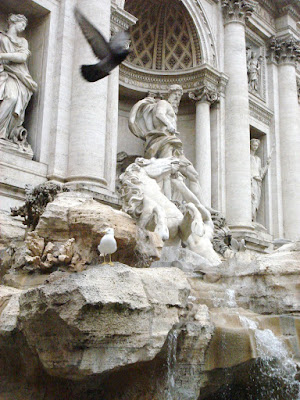 The high-Baroque marble fountain dominates a tiny piazza and was designed by Salvi in the mid-18th century after he came in second in a design competition. Its water is supplied by one of Rome's earliest aqueducts whose source had been discovered with the help of a virgin. Apparently the Romans liked to build a fountain at the endpoint of an aqueduct.
In this area between the Trevi Fountain (passing through the Pantheon) and Piazza Navona, there are a number of very good cafés and gelaterias and we have managed on 2 visits to try them all. A few people have told us that the best café in Rome is served at Tazza d'Oro (via degli Orfani) and Bar Eustachio in Piazza Sant'Eustachio and though it was raining cats and dogs and we couldn't sit in the terrace, we squeezed with the whole world in the tiny bar and had our coffee : gran café for Hub and the Teenager (one of the exceptions), almond milk for Baby Girl, granita di caffe for Baby Boy and a chocolate-café with whipped cream for me. Hub said that the coffee in Rome is even better than the coffee in Modena and I think that we wouldn't be able to drink coffee outside Italy from now on. Even coffee in France tastes like dishwashing water nowadays. 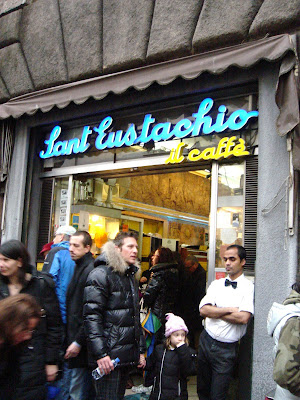 Bar St Eustachio
There are 2 excellent gelaterias just at the one via della Maddalena : San Crispino and Gelateria della Palma. The former is smaller, very very good and more expensive (e.g. 4 euros for one small cup of gelato) and the latter looked like one big tourist trap but the gelati were very good and reasonably-priced. 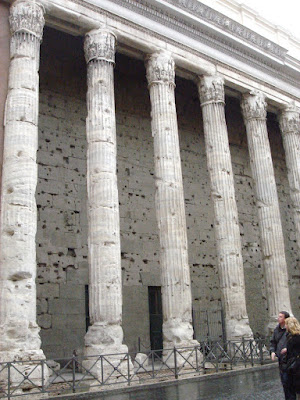 Tempio d'Adriano
On the way to the Pantheon, we passed by the Tempio d'Adriano (Temple of Hadrian). You can still see 11 surviving Corinthian columns from the temple standing in the Piazza di Pietra. They are incorporated into a 17th century papal palace that now houses the Borsa Bank. 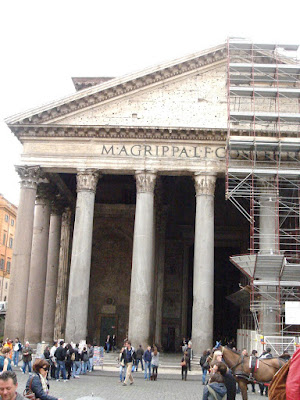 Finally, very near our flat is the Pantheon. As far as I know, a Pantheon is where one's illustrous dead is buried or honoured. This one houses the remains of a few Italian Kings (e.g. Umberto I and Vittorio Emanuele II), the painter Raphael and composer Corelli among others. What is notable about the building is the fact that it is one of the best preserved buildings of ancient Rome. Originally built by Agrippa in 27 BC to honour the planetary gods, it was rebuilt by Hadrian around 120 AD. In 608 AD, Phocus gave it to the church (and had a column erected in his honour in the Foro Romano in return) which over the centuries removed bits and pieces from the building to make other things elsewhere e.g. the bronze from the ceiling went to make 80 cannons for Castel Sant'Angelo and the canopy at Saint Peter's. 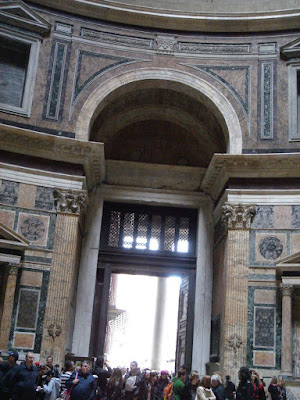 The entrance viewed from inside 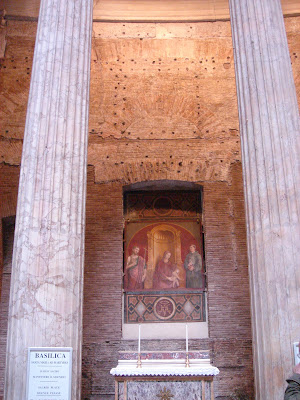 The dome is the world's largest unreinforced concrete dome and probably inspired the dome at the Florence duomo and at St Peter's. It only has one opening to let in light to the building (besides the door) and the height and width of the building measures exactly the same. 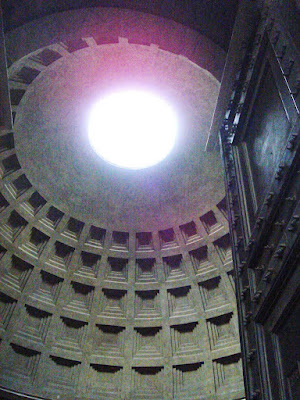 The dome and its oculus

Those ancient Romans were really brilliant, pity they had to become so debauched and excessive.
Publié par Beau Lotus 涟 à 15:27