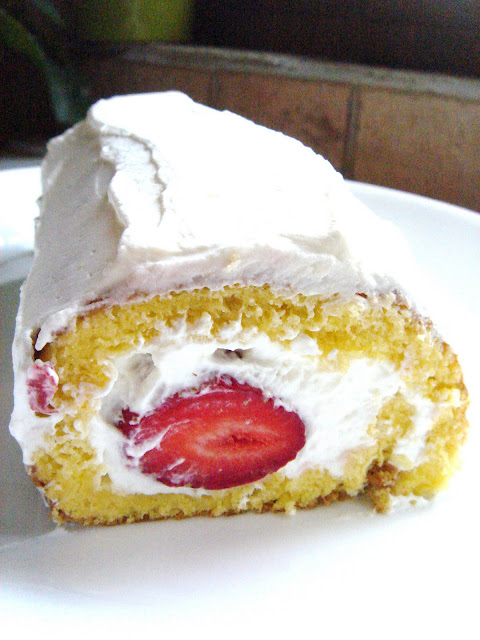 Bought a crate of strawberries and decided to make a Strawberries and Cream Swiss Roll for tea. I'm getting back into a swiss roll trip though I wish I had better knife skills as I create a disaster each time I try to slice them. Or I should sharpen my knives, but I cannot bear the sound sharpening them makes, days like this I wish the knife-sharpening guy who used to do the rounds in the neighbourhood in my childhood still exists...


Kept some for the Hub and for once he was actually quite positive about it. Said the sponge and cream were very good, but that I'd need more strawberries. He's not the one having to roll it up. 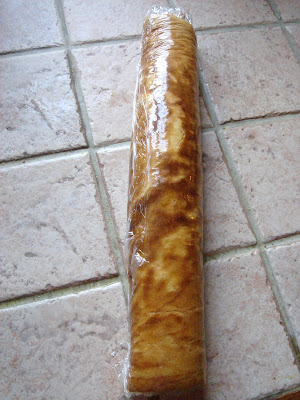 Rolled up and left to cool


The sponge is like for the nutella swiss roll that I usually make and the cream filling is basically mascarpone and whipped cream with sugar and a touch of some liquor.


The main photo was of the swiss roll as it was freshly prepared (and badly sliced). The cream needed to be chilled for at least 2 hours in the fridge. I forgot to take a picture when it came out of the fridge later so that'll have to do. I've taken a photo as I was filling the roll with the cream and strawberries but it didn't turn out.
Publié par Beau Lotus 涟 à 09:21

Nice blog you have Mary, calendar-style like a suggestion of what we could eat everyday :-).