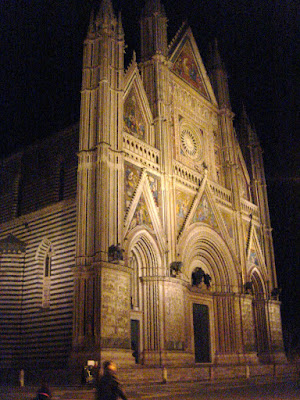 Orvieto's Duomo at night
We left earlier than planned for Rome because we suspected (from past experience) that we would be caught in a traffic jam around Florence. And so we were. Stuck for a good 2 hours. And we stopped over at Orvieto in Umbria for dinner - a brilliant idea.
I have loved Umbria since I set eyes on this region a few years ago. If I had to live in Italy, I wouldn't mind living in Umbria. It has everything you need in terms of landscape, architecture, climate, food, culture, history and proximity to the sea (though the region itself is land-locked).
Orvieto is a former Papal state with an old fortified city built on volcanic cliffs. Apparently it also has a network of underground tunnels that allowed its noble families to escape from the cliffs during siege. It was breathtaking even at night. A walk through the old city saw us peeping into beautiful restaurants and bars and admiring old churches and houses everywhere. Its duomo is majestic with a beautiful facade and is of what is known as the Italian Gothic style.
In the mid 17th century, a passing Bohemian priest celebrated mass at Lake Bolsena, near Orvieto, and legend had it that so much blood dripped out of the communion wafers that it soaked through the cloth below. Pope Urban IV had the cloth carried to Orvieto and, to commemorate the miracle, he established the sacred holiday of Corpus Domini. Raphael covered one wall of his famed Rooms at the Vatican with a representation of this event in church history. 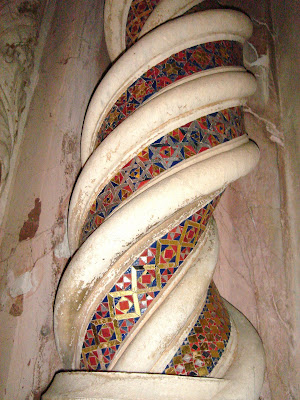 The mosaics covering one pillar of the facade

We particularly loved the carved rose window in its facade, the story of Genesis carved into the panels surrounding its doors and the splendid mosaic work. It took a century to finish building this cathedral. 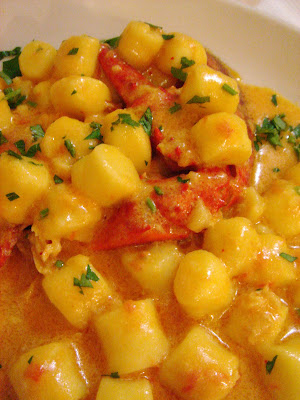 Dinner was at the excellent Trattoria Del Moro - Aronne. It's in an alley near the Cathedral and was recommended by the Guide Michelin. The food was simple and good , with truffles here and there. I am normally not a fan of the gnocchi di patate, but my Gnocchi al Astice was absolutely light and delicious in its flavourful cream of lobster sauce. In the region stretching to Rome, lamb is known as Abbacchio - baby lamb destined for slaughter - and that was what I had after the gnocchi. The rest of the family went for the Truffled Tartare, with the Teenager giving us his rendition of Mister Bean-eating-steak-tartare which of course didn't put the English in a good light. Come to think of it, we ate through Tuscany for a few weeks a few years ago and very often would come across the English sending Fiorentina steaks back to the kitchen to be more cooked - to the exasperation of the Chef. 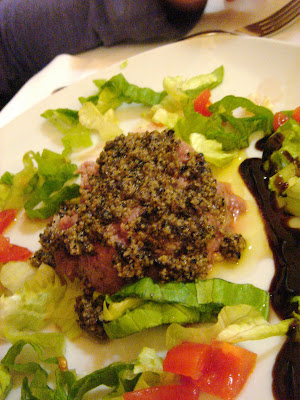 Hub said he was sleepy and passed the steering wheel to me after dinner. Fortunate that we had decided to leave Roma centro for the next day and spend the night in a Holiday Inn just outside the city centre. I wouldn't know how to drive into old Rome otherwise.
The hotel was very comfortable with a very good buffet breakfast - I would recommend it to anybody looking for a decent hotel just outside Rome - if you have your own car. Otherwise, make no mistake, Rome is best enjoyed with accommodation in its very heart.