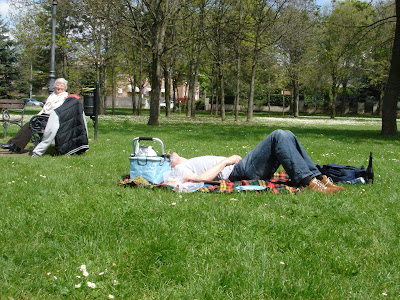 An overworked father taking a nap during the picnic
It rained yesterday so in many people's minds today's PTA picnic at Formigine Park wouldn't take place. Even when the sun appeared late morning Hub didn't want to go, saying that the grass would be wet. I told him that I like to keep a promise so if I've said that I would go, I'd try to do so. Finally we compromised, we had a quick lunch at home (Roast Beef with its roasted vegetables) and then I packed a few snacks and went to the park with the Babies. He went to play golf with the Teenager. 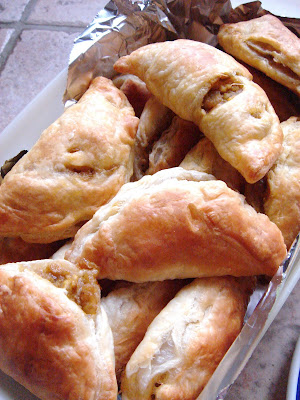 Baked Curry Puffs
It was a little chilly at times but it was nonetheless a nice afternoon. There were about a dozen families who finally turned up and it was a nice number as we got to talk to everyone this way. The kids played while the adults chatted. 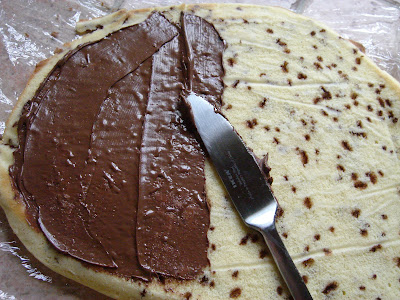 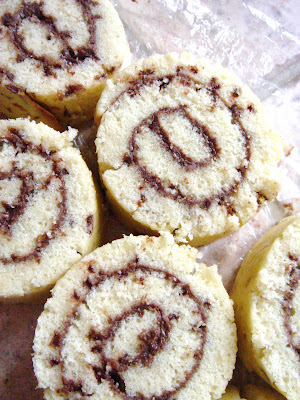 I made 2 dozens of curry puffs and a dozen chocolate chip cupcakes. Also Nutella Swissroll only it was eaten up before the picnic. A few families came with the right picnic blanket (that wouldn't give you a wet bum) and made me wish I had one too. I managed to squat KL's :-). 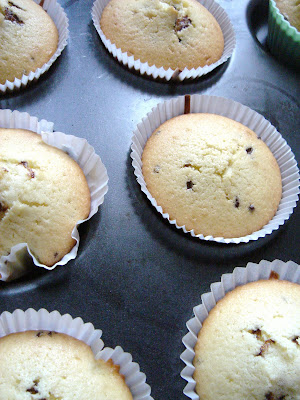 Chocolate Chip Cup Cakes
This was another one of the occasions that the PTA came up with to help the families gather and socialise and this time on an informal basis. The fathers got to meet each other too which is important when you're a veteran expatriate family. Many of the men only get to meet people at work and depend on their wives and children to widen their circle of friends.
Publié par Beau Lotus 涟 à 17:54

Looks very nice! Do you have a recipe for the nutella swiss roll and choc. cupcakes to share?? I miss swiss roll- made it last when I was in high school.

I used to make them alot in Secondary School...

Used the same recipe for the choc chip cup cakes, only added the chips in. They are sponge cup cakes, not as rich as the usual cup cakes.

Hahha, Pris, me too wanted the swiss roll recipe when I saw the cake. :) Thanks S!

Beautiful desserts -- I can understand eating up the nutella roll before the picnic!