Stingray and other Fruit from the Sea 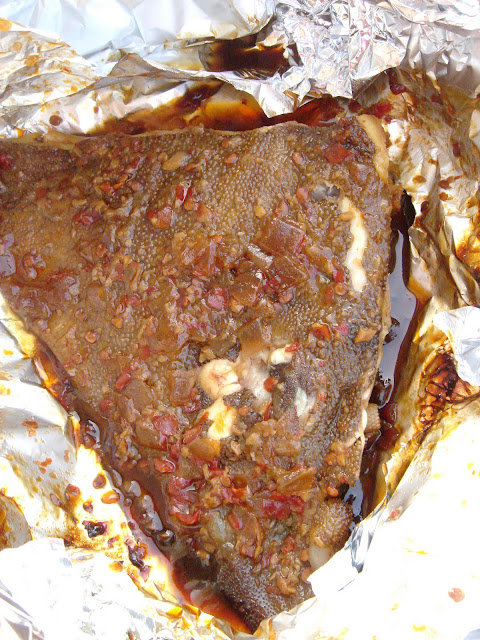 I have mentioned before that we're back most Saturdays at Aldina's for lunch now that it's Spring. And just before lunch, we would make a trip to the covered market below to buy some fresh fruit, vegetables, bread, cheese and seafood. This very much reversed the relatively simple meals that we had during weekends in Winter and added to the possibility of taking our meals out in the terrace nowadays, we're very much enjoying the Spring. 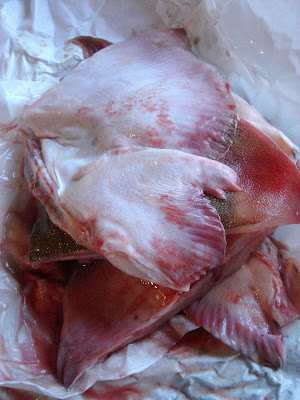 
Yesterday, they were selling stingray (skate) in the covered market. This is rare so we were quite excited about it - only their refusal to peel the fish for us flattened our enthusiasm a little. It was quite scary seeing the stingray in one big piece tail included. But the fishmonger agreed to at least chop it up into 4 pieces so I decided to buy it. It was more expensive than the scampis and yielded less flesh, but well, we've not eaten it for a while now. 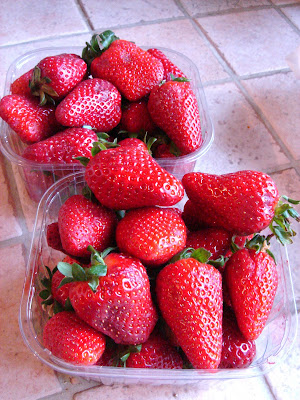 I kept one piece for myself and made a spicy BBQ Sambal Stingray with it. The other 3 pieces I cooked for the family the French way : Poached Stingray with Lemon-Butter Sauce. 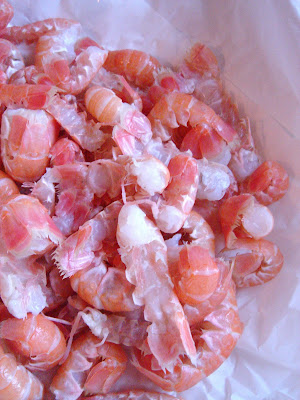 
It was quite a feast as we also had Pan-seared Fresh Sicilian Prawns and Fried Scampi with Garlic-Chilli-Parsley. For dessert, we had juicy strawberries from the south of Italy with whipped cream. 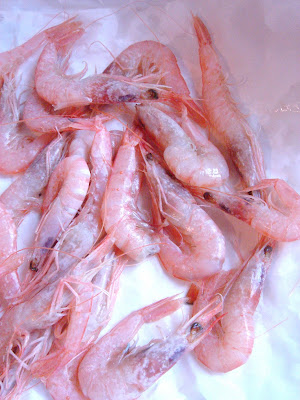 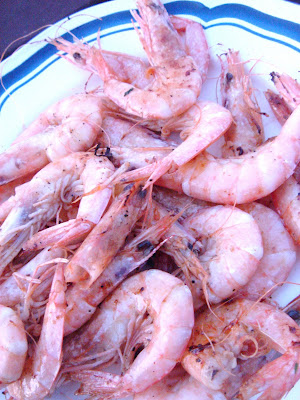 
I didn't make my own sambal for the stingray, using a Thai-style chilli-lime sambal that I bought in Singapore 2 years ago. I marinated the stingray in a bit of salt and ground turmeric before spreading the chilli-lime paste on it. Wrapped it in aluminium foil and cooked it on the BBQ (with the BBQ's cover down) for 20 minutes, turning off the gas and then leaving it on it for another 10 minutes to rest. Squeezed some lemon juice over it before serving and it was delicious. 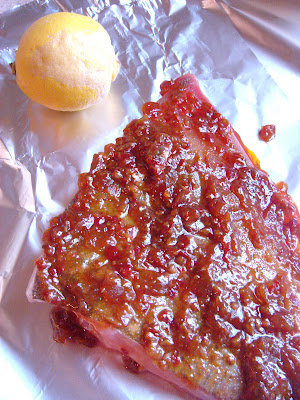 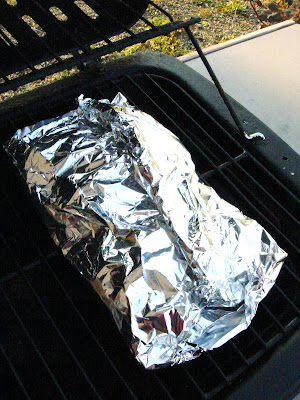 
The other stingrays were more complicated to prepare but are more delicate in taste. You have to prepare a liquid for poaching the fish first by bringing to the boil water with a bouquet garni, a lemon wedge, bay leaf and a little fumet de poisson. Once it starts to boil, lower the heat to the very lowest (really small flame, if using electric - turn it off) and gently lower the fish into the liquid. Cover the pot. Depending on the size of the fish, the cooking time should take between 5 and 10 minutes and the water must not be boiling at any time. 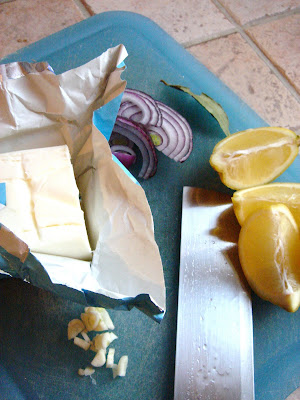 Preparing the ingredients for the sauce

At the same time, you prepare the sauce. Melt some butter in a pot and gently fry some onions or shallots and a bit of garlic in it. Then add a bit of the liquid from poaching the fish to it, followed by some crème fraîche. Pour in juice from one lemon and mix well. Keep it warm as you prepare the fish. 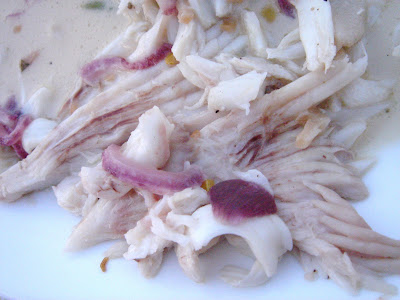 Remove the stingray from the poaching liquid. The flesh should slide off the bones easily when you remove it with a knife. Arrange the flesh on a serving plate, sprinkle some fresh pepper and salt and pour the lemon-butter sauce over it. Eat it when it's hot.
Publié par Beau Lotus 涟 à 13:31

Wow - I have never eaten sting ray. What does it taste like?

Er...I'm not good at describing taste. It's white fish and is not oily. I like its taste though if you're unlucky your ray could taste of ammonia.

I personally prefer it barbecued with sambal belachan in a banana leaf and served with lime juice.