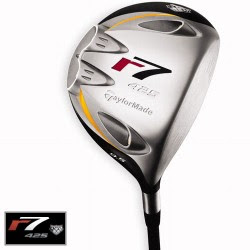 TaylorMade R7 425 TP Driver (left-handed)
I was on a golf roll this morning. No, not with hitting balls on the driving range, but buying them (and more) from ze comfort of the home.
I've not bought Hub a birthday gift as you know. Certes, I've thrown him a party, but somehow I still feel bad about not giving him a present. I was on the Net buying golf balls, golf towels, divot repair tools, golf shoes etc for the children (yes, 3 kid golfers, imagine the financial damage) and then I saw this TaylorMade R7 425 TP (left-handed) Driver.
It was originally selling at £430 which is crazy for a metal stick. But when I went on the Net to check the reviews, they were excellent, with some claiming that the driver's even better than Callaway's etc. Before I could change my mind, I bought it.
Hub would freak out if he knew, but it would be fait accompli by the time he sees it. And since he's the only left-handed player in the family, no one else can use this club. Price aside, I'm sure he'll welcome the chance to improve his game (and I'm going to start praying that this happens or I'll be nagged to death). He doesn't have much time for leisure, and he spends whatever little time he has on the golf course. Hopefully this driver will be a welcome addition to his current set of Callaway clubs.
The Teenager has a TaylorMade driver too and he absolutely loves it. He has been mentioning Odyssey putters (and putting is apparently his point faible), but I do not think that he merits anything this expensive for now. My blood is still boiling when I think of his Maths grades...
R7 425 TP Driver (description taken from the website) :

New TaylorMade RE*AXTM shaft featuring Fujikura ROMBAXTM technology reduces ovaling and creates greater stability from the top of the shaft to the tip.

Inverted Cone Technology provides a larger area of the clubface to deliver higher ball velocity and greater distance even on mis-hits.

Ultra-Thin Wall Technology saves critical weight and permits the clubhead walls to be 0.6mm thin, 25% thinner than the walls of the r7TM quad and r5TM dual drivers.