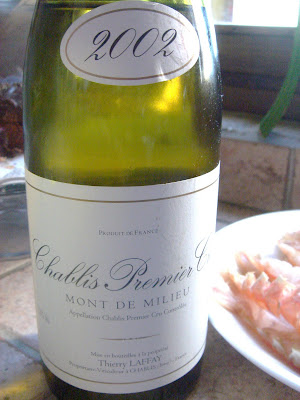 The Father and Son golf team returned home half-dead after their 18 holes. Apparently since the 9th hole the Teenager was KO and in spite of his endless hours of watching Tiger Woods play on YouTube and bragging about his moves whether you wanted to listen or not, he could barely hit straight and lost at least 15 (very expensive) balls this afternoon. Needless to say, they didn't sign up for tomorrow's competition as planned, they need to go back to the driving range and keep working on their swings...
I hope I sounded suitably sympathetic. Actually I am horrified. I'll never get the hang of this sport. And I now have double membership - at the golf and at the gym - and I do not even know where to start, how to divide myself between the 2. I am not doing any holes at the moment, since my balls tend to fall at my feet - if they moved in the 1st place. I was glad to be able to occupy myself by preparing dinner. This evening I grilled a few Scampis and made Garlic and White Wine Venus Clams on Squid Ink Pasta. But the highlight of the meal was a bottle of precious Chablis 1er Cru Mont de Milieu that Hub bought on one of our long-ago trips to Thierry Laffay's in Bourgogne. 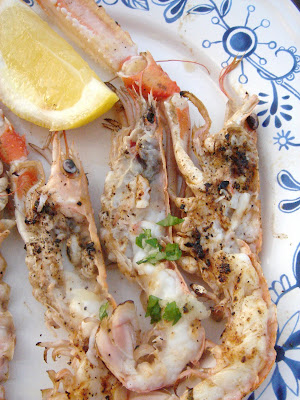 Grilled Scampis
Good white wine is hard to come by in Italy, forget good Chablis. And Laffay's wines hold a special place in Hub's heart as his late father used to buy wine from said vineyard. The Old Man and his pal Toto used to drive to Burgundy and come back with crates of bottles in the boot. And in between they would have participated in wine-tasting walks where they got to walk around with a glass in the hand and taste wine all over; or they would have brought along their own picnic of baguette, cheese and charcuterie and gone round to the different cellars so as not to taste wine on an empty stomach. :-)
I miss the FIL, funny enough. He was a great cook, a bon vivant and such a perfectionist. I missed those walks in the forest that we used to make to pick mushrooms. Actually, I was the only one who cried non-stop at his funeral. And I do not even really know the guy. One thing I do know though is that the children would have enjoyed spending time with their paternal grandfather and it is a pity that they couldn't.
The wine was excellent. Hub said that he's going to call up the guy and see if he could have a few crates delivered to Italy. But the wine cellar is already full, I have no idea where he's going to keep any new bottles.
Publié par Beau Lotus 涟 à 19:25

Did you ask the Teenager now which sport he prefer? golf or tennis?

I come from burgundy and be sure I love Chablis!
Good choice!
Gaelle

The Teenager has given up on tennis more than a year ago, he claims to be totally devoted to golf now. :-)

Ah, we do eat and drink so well in Burgundy!