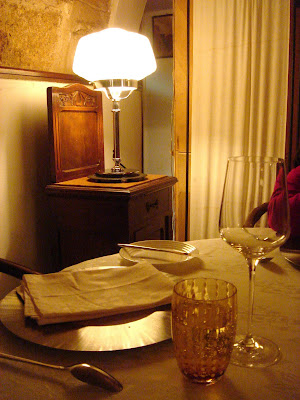 We went to the only restaurant with a Michelin Star in Alghero. Ristorante Andreini is also part of Jeunes Restaurateurs d'Europe. This group has quite a number of promising chefs and we've rarely been disappointed in them. 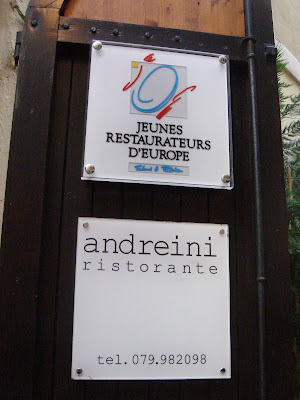 The restaurant also has a trattoria next door that serves mainly classic pasta and seafood dishes at lower prices. We hesitated about bringing the children there since it was for dinner, but after those kidnapping cases that happened in Spain when the parents were out dining, we thought that we had better not take any chances. Besides, we believe in educating their palette from young and they are used to eating in restaurants anyway.
There were 2 dining rooms and the interior was cosy and dimly-lit. Not ideal for food photography though. The overall dining experience was positive as the food was very good and the prices normal for a one-star Michelin (it came up to about 300 euros for the 5 of us), but we've dined in so many good restaurants that we do have certain expectations where the service is concerned and we felt that they could do better in that area.
Do not get me wrong, the staff was friendly and attentive enough. But it takes more than that to qualify for a good rating. In France, serving is an art with a lot of attention paid to detail and we have gotten used to a certain savoir-faire that tells us immediately whether the staff has been properly trained or not. They have to be a master of their craft and their pride in their métier has to come through. They need to have attitude. It is all part of the dining experience. The Michelin restaurants we've been to thus far in Italy somehow lack in that.
But the food was creative and very good. The butter was salted which was a good start and they served you different types of bread rolls most of them quite edible. Only problem was the way they stacked them on your little plate. 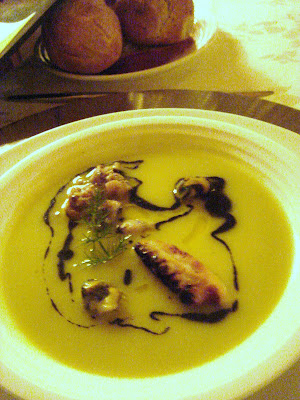 To tickle our palette, they offered us a vegetable soup with octopus and baby squid to start. Hub then ordered Marinated Tuna while I had the Scampi Pasta in Broth. The children had a Mixed Salami Platter. A problem occurred at this point. They ran out of tuna, but didn't think to inform us. Just replaced it with a Fried Baccalà on Tomato Sauce and expected us to be happy with it. 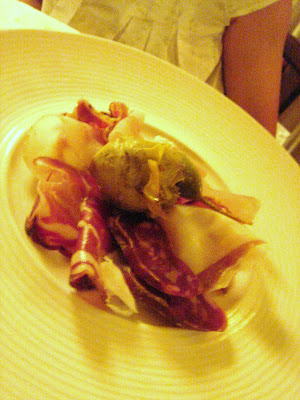 Hub was disturbed. So disturbed that he was incapable of choosing a replacement dish properly and would spend the rest of the meal lamenting about it. When the flow of the arrival of the dishes has been disrupted, it's more than a hiccup in a fine dining experience. You may wonder why he was so affected by a simple mistake, but when you see how much he takes his dining experience seriously from choosing his dishes to the wines that go with them, you may understand that the respect has to be mutual. 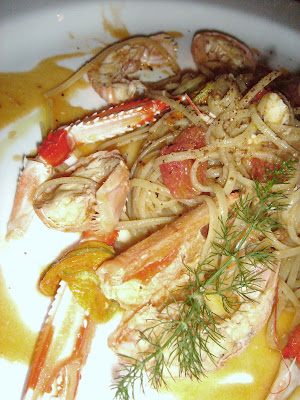 Anyway they offered us the Baccala dish and it was very good (if a bit salty). Which reminds me that I must try to make it myself one of these days.
The children then had a very good Beef Filet while we had Alghero's specialty - Aragosta (Lobster) di Alghero alla Catalana. 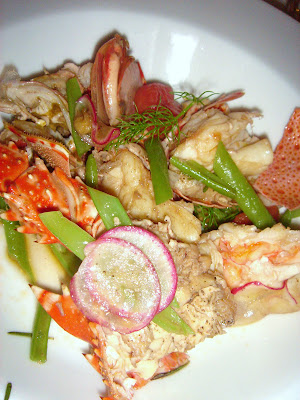 The evening before, we were at a restaurant that supposedly specialised in this lobster. Hub was all set to spend a fortune on lobster everyday, but I created much frustration for him when I saw the price, blanched and refused to order said lobster. 18 euros per 100g and each lobster weighs an average of 750g!!! I would suffer indigestion eating something this expensive.
I told Hub that I wouldn't spend more than 50 euros for a portion of the lobster and when I saw that they were going for 55 euros a plate at Andreini, I told Hub that we could eat it - once. One couldn't come to Alghero and not eat their lobster that much I will accept. And it was very good, by the way. Such firm and succulent flesh cooked to perfection in a simple sauce with tomatoes. But still, give me crab and scampi any time. Lobster is too expensive. 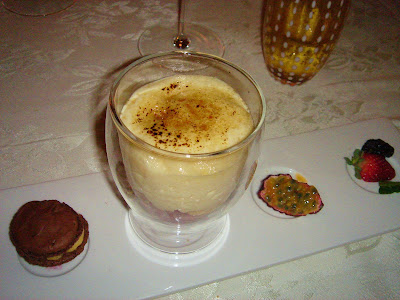 Dessert was not too bad - Crema Catalana done their way - but nothing as good as most French pastries. We usually skip dessert in an Italian restaurant, but felt that we should give them a chance. If I apply myself, I think I'd be able to do just as well if not better.
All in all, we have enjoyed the dinner and would return to try the other savoury dishes. Hub still wonders if he shouldn't have tried one of their baby squid dishes and I certainly wish he had - so that I may taste it too.
Ristorante Andreini
Via Ardoino 45
07041 Alghero (SS)
Tel. : +39 079 982098
mail@ristoranteandreini.it
Publié par Beau Lotus 涟 à 23:18

Look like you had a wonderful dinner in this restaurent.