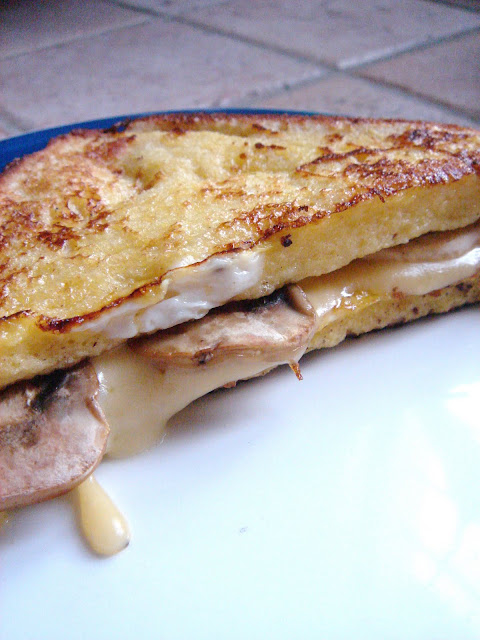 
It was 6 in the evening (yesterday) and I had a sudden craving for French Toast. With Cheese. Why not with Mushrooms too? I should be off washing the mountain of dirty bedsheets, prepare MIL's bedroom, file our French taxes or tidy up after the kids - but I made Cinnamon French Toasts with Melted Gouda and Grilled Mushrooms instead. And just before dinner too.


Sweet (I always use sweetened condensed milk when making my French toasts) and savory go really well together and the melted cheese contrasted nicely with the firmness of the grilled mushrooms. If I were counting calories I would surely have burst the day's quota, but since I have no head for numbers anyway ignorance was bliss. 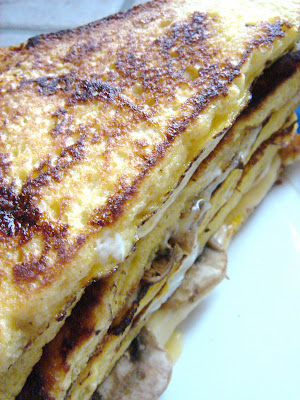 Tomorrow I have planned a vegetarian lunch for a few friends. Not that I'm suddenly into vegetables, but 2 of them are strict vegetarians and I thought that it would be easier this way. But one couldn't come because she had guests visiting, and the other cancelled last minute. I am now tempted to change my menu, but it wouldn't be easy since the fridge's stuffed to the brim - with vegetables, what else. I had visions of going to the neighbouring chicken farm and stealing a chicken or 2 - but that place really stinks and I wouldn't know how to murder a chicken.


I was debating as to whether I should share with you my recent morbid dream nightmare, since it really wasn't appetising, but this blog is more for me to remember my own life than anything else so I will note it down.


I dreamt that I had come into possession of a beautiful coffin. And in it there were 2 corpses. I have no idea who they were or whether they were men or women, but they were definitely human. I brought them to a special place where there was a special stove that could cook the corpses in their coffin. It took a long time to cook them. But whether they were grilled, steamed, broiled, sautéed or boiled I have no idea.


Then when the cooking was done, I suddenly realised that I hadn't chopped them up before cooking them - and decided there and then to abandon the coffin with the cooked corpses. The rest I couldn't quite remember now.


Now, wasn't that a truly horrible dream? How could one interpret such a nightmare? Probably had to do with those 2 uncles who were recently admitted to hospital...
Publié par Beau Lotus 涟 à 19:21

this sound interesting and delicious !

The French Toast or the cooked corpses ? LOL

Yes to the French toast but I'll pass on the main course of burnt bodies!