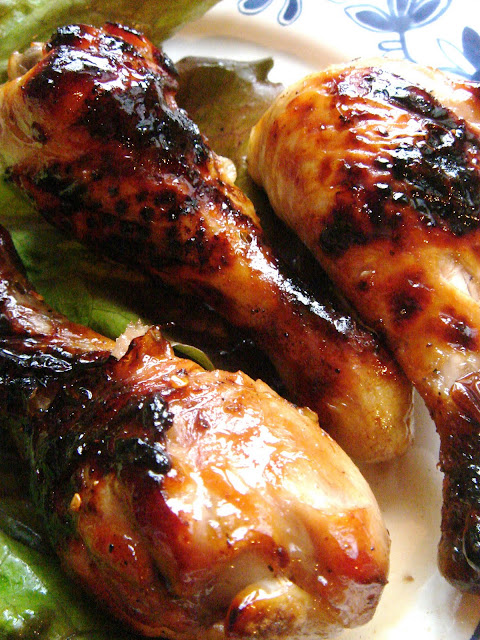 I am more or less shopping a day at a time this week because I need space in my fridge for Sunday's lunch. For dinner this evening, I decided that we would have Baked Coca Cola Chicken Drumsticks - a sure hit with the family. With the change in the weather everyone is feeling a little queasy and Coca Cola having medicinal properties could give us just that little (more psychological than anything) boost. Actually, I love making Coca Cola syrup. And only the original Cola would do, the light and zero versions contain too many chemicals.


To feel less guilty about the soda and sugar, I served the drumsticks on a bed of salad leaves fresh from the neighbouring farm. And finished the meal with loads of fresh cherries and strawberries from another farm. I try to buy whatever fruit and vegetable I can find in the farms near my house when they are in season. Help the local economy and waste less fuel in the process.

Marinate the chicken with a bit of salt, black pepper and the cola-red wine mix for about 30 minutes. I wouldn't do more as the salt will drain the juices from the meat. 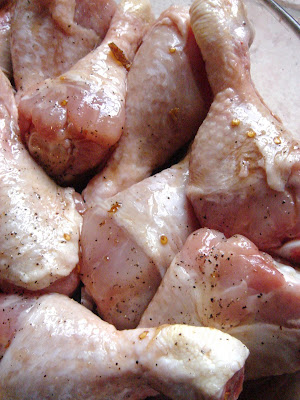 
And prepare the syrup. By adding all the ingredients together in a heavy-bottomed pot and simmering over low-medium heat till you get a syrup. That should take between 20 and 30 minutes. 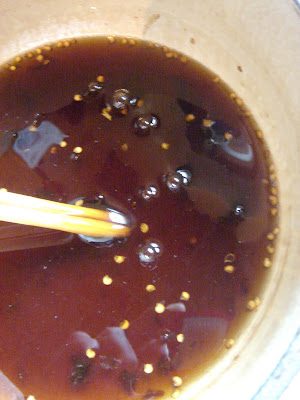 
Before putting the chicken into the oven, brush them generously with the Cola syrup. Bake for 10 minutes.


Remove from the oven and brush more Cola syrup over the drumsticks. Bake for another 10 minutes. Watch that they do not burn though.


Remove from the oven and drain any excess liquid into a bowl. Turn the drumsticks over to the other side and brush more Cola syrup over them. Return to the oven for another 10 minutes.


Pour the bowl of liquid into the pot of syrup and simmer it on medium heat on the stove. Reduce as much as you can.


Remove the chicken from the oven and brush them with the syrup. Stop the fan and just use the grill. Bake for another 10 minutes.


Switch off the oven. Drain any excess liquid into the pot and return the chicken to the oven. Leave them there for at least 10 minutes to relax. 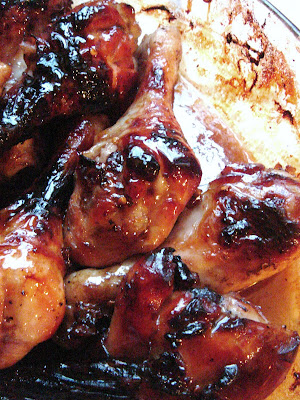 In the meantime reduce the liquid for one last time. Pour the golden Cola syrup over the drumsticks before serving. Whatever syrup that is left over will coat tomorrow's grilled tofu.


PS : You can also braise the chicken in the Cola syrup and finish the cooking in the oven or on the BBQ.
Publié par Beau Lotus 涟 à 19:12

Hey you think the syrup will work in a crockpot on high for 5 hours?

Do not have a crockpot, why don't you try it and let me know?

Lovely recipe! Does the chicken have a sweet, barbeque flavour?

You can actually taste the cola in the syrup when you're making it, I was thinking of chupa chup...But once it's on the chicken, it has a sweet taste that can be quite addictive. We wanted to put in on everything from cucumber to rice. Not sure about BBQ flavour...