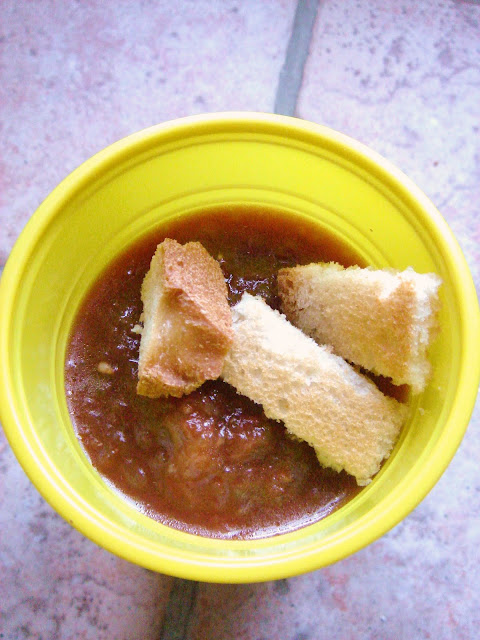 I was reliving Andalucia during this lunch with a bit of Gazpacho for everyone en amuse-bouche. We used to make it very often when we were living in Jaén and just last week MIL called me from France asking me for the recipe. I am therefore dedicating this post to my dear MIL. Who incidentally would be arriving in a few days for a month-long stay.


The gazpacho is a cold raw vegetable soup that is widely eaten during the Summer months in Spain (especially in the South). It may have Arab and/or Roman origins and is similar to Ajoblanco or white garlic soup, another cold vegetable soup popular in Andalucia.


Stale bread is usually incorporated into the soup, but I prefer to serve mine with garlic croutons and eventually some diced tomatoes with a dash of olive oil and sherry vinegar on top. When trying to serve a more "modern" meal, I sometimes serve the soup in drinking glasses topped with an avocado or some other green purée like basil or parsley.


Basically you process everything into a soup. The consistency is up to you. If you do not want too much foam in your soup you may want to pound your vegetables in a mortar instead.


Chill at least for a few hours before serving. I usually prepare it the night before so as to allow the flavours to marry.