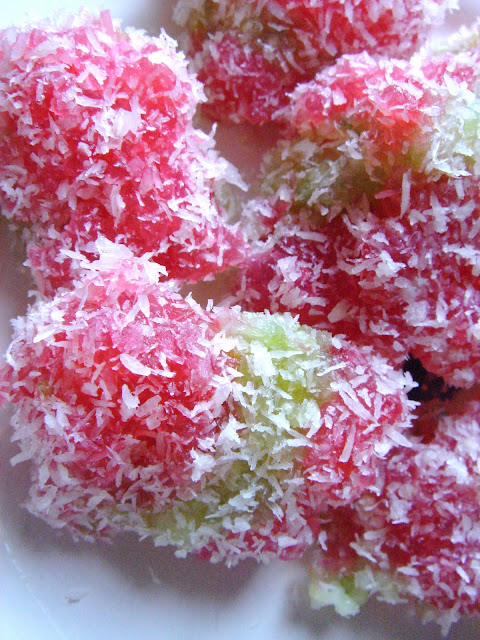 I was at the Chinese shop the other day for a few packets of instant noodles and curry paste for the MIL to bring home to France. And saw sago pearls which gave me an instant craving for...Rainbow Sago Kueh.

Shouldn't be eating so much in the horrible heat that we're having, but logic and desire sometimes do not always agree with each other. If I was pleased with myself when I finally made the kueh and ate it, I felt pretty bad when I saw my new Barbie doll-like "girlfriend" driving up in her Maserati at the golf's carpark and asking me why I was not staying at the pool. "Going home to eat more rainbow sago kueh," was supposed to be my answer, but I just smiled and waved her off, of course.

She is probably in her mid to late 40s, but has pouty lips, tight skin in the face, big boobs, small waist, thick hair and smooth slim legs. Not a single mosquito bite on them either. For some reason she likes sitting next to us at the pool. Because a girl like me makes her look even better?

Anyway, I've promised myself not to judge our girlfriend by her sultry and overpolished exterior. She actually seems very nice. They have a pool in their huge house in Montale, but she leaves it to her kids and their friends and turns up at the pool at the golf instead. Her teenage daughter seems to be very smart too, currently studying law and hoping to become a Judge one day. I wonder what her Hub does (he's always playing golf). Though I'm not English, I thought that I should spilt up my interrogation lest she thinks that I'm too interested in her. In any case I am not interested in her bejewelled bikinis or her expensive cars, but I must admit that I am starting to wonder what makes her tick. How does she occupy herself outside the hours that she spends by the pool (which are really numerous)...what are her motivations in life? Are her boobs real? 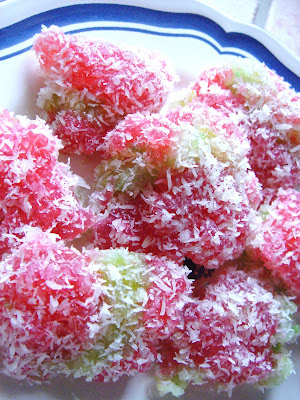 Combine the grated coconut, sugar, salt and lemon juice and steam it for 10 minutes. Set aside.

Divide the sago pearls into 2 portions and put them in separate bowls. Divide and add the grated coconut, sugar, salt and coconut milk into each bowl.

Steam the red sago for 15 minutes and then add the green sago and steam for another 15 minutes. Let the kueh cool a little, then slice it and roll the pieces in the steamed grated coconut. 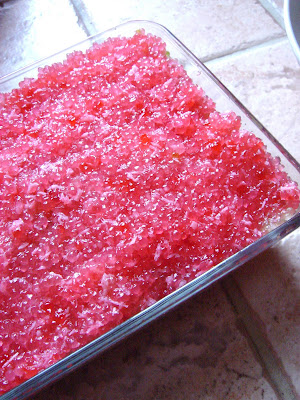 Mine are not pretty since I sort of dug them out in my impatience (had to bring the Babies to a play date), but anyway it tasted the same once it's in the mouth.
Publié par Beau Lotus 涟 à 15:50

hey serene, you make me laugh with your honest thoughts! and you dare to write what you think! You are very pretty girl, your photos show you photogenic and you are so smart with your hands that can cook so well, that will stand you out against the barbie dolls, as you can cook your way to your husband and babies' heart.

Serene, you tickled me so much this morning with this write up. Definitely added some sunshine to this grey and wet morning!

Hi Wendy, actually I love Barbie dolls! Am probably envious of her ability to care for, love and respect her person. I am too lazy for that. Each time I looked at my mosquito bites (and scars), I knew that I've messed things up.

And like I said, she seemed nice. We shouldn't judge a book by its cover, so my first impressions were just that, my 1st impressions.

Edith, is it still raining back home? We're dying of the relentless heat here.

weeks ago orchard road was flooded, cant imagine right. ya we have been getting flash floods lately but seems to be normal now. i like rain.

Hey Serene
You're funny! I think she really could be really nice too? Perhaps? And perhaps she feels that you're "real" enough for her to hang around with?

Oh, one qn. Your sago pearls. Did you have to cook them first (ie. boil them) before you steam them?

Pris, thanks for pointing it out to me, I've forgotten to mention that the sago needs to be soaked in cold water for 15 minutes (and drained) before being used.