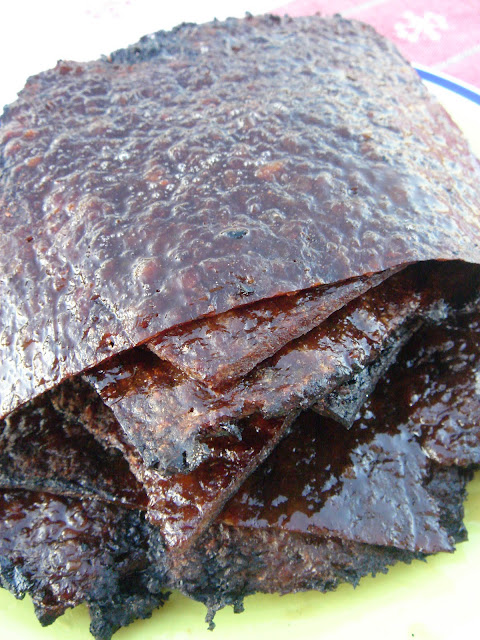 Since we're not back in Singapore this year, I've decided to make some Bak Kwa (BBQ Minced Pork Slices) for the children. It was a treat for them coming back always hungry from the pool, and as Hub said, I've even managed to attract the owners' dog with my BBQ meat slices. 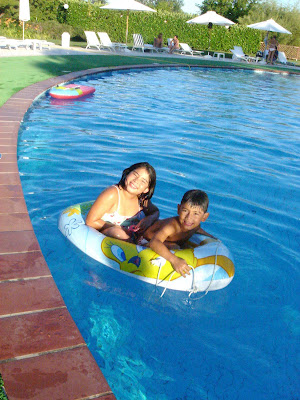 Babies at the pool

I've blogged about my Bak Kwa last year and while it wasn't Lim Chee Guan or Bee Cheng Hiang, it wasn't too bad for a home-made attempt. Actually it's really quite easy to make, only difficulty is getting it to feel and taste the way I was used to having it.

The last time, I felt that it wasn't sweet enough. So I've increased the sugar dosage. I've also made the effort to glaze and BBQ the meat slices and the result was immediately much better. I also played with the thickness of the slices, trying both very thin and thicker ones. And I've tried cooking them longer or shorter in time. The conclusion is that you have to do it the way you like it, e.g. the Teenager prefers it harder, the Babies softer etc. I will have to continue experimenting until I find a version that suits everyone, I guess. But this one I'm reasonably happy with at the moment.

Mix all the ingredients with the pork and marinate for a few hours if not overnight.

Place the marinated meat between 2 large sheets of baking paper and roll it flat with a rolling pin. The thickness is as you desire, very thin = drier and crispier. 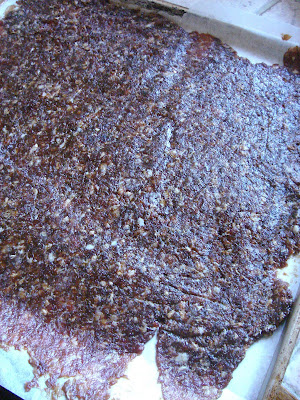 Raw and just rolled out

Remove the top piece of baking paper and bake in the oven for 20 minutes. Drain any liquid remaining in the baking tray. Leave the meat to cool and dry out in the open. 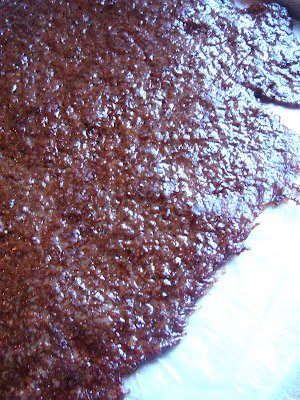 "Dried" in the oven

Prepare the BBQ. Cut the meat into smaller slices so that it would be easier to BBQ, turn them over etc. Glaze the meat on both sides with the sugar-sesame oil-sherry-soy mixture. 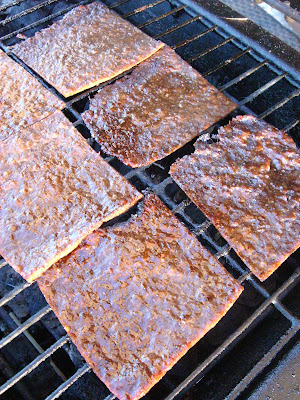 It is best eaten hot, but cool it properly before storing in a tupperware and it can easily keep for a few days. Mine didn't keep for long. The cleaning lady came this morning and helped herself to the remaining few slices in the tupperware!
Publié par Beau Lotus 涟 à 09:34

Fantastic! the kind of food I like to have with fresh beer...hmm I need holidays!!

Ju (The Little Teochew) a dit…

Quite amazing, aren't you? How many of us would dream of attempting this!

I wouldn't either if I could see Bee Cheng Hiang everywhere I turn...

You never fail to amaze me! I would try it if we had a real BBQ pit. It would taste different if one grills it in the oven. Do they taste like those from Bee Cheng Hiang?

Pris, I wish I could say yes, but alas no. Mine were not as sweet and the texture was not the same.

BCH must know something that I don't :-). I fantasize about going undercover and grilling their bak kwa for a few weeks to find out the secrets...