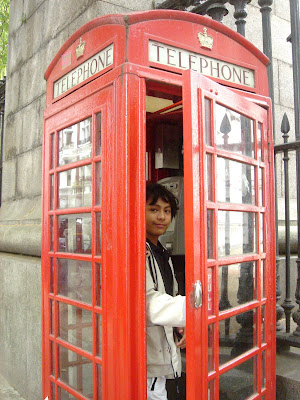 The Teenager in a London Telephone booth
It is sometimes difficult to believe that I am a mother to a teenager. No matter how low his voice has cracked and how much hair he has on his private parts (even the boy himself has stopped counting), he's my baby, my firstborn and maybe I prefer to remember things as they used to be.
In the early days, I used to celebrate my child's existence on the 9th of every month, set the alarm clock to the exact time of his birth on his birthday and go gaga over everything he did. Since then I've grown (much) older and have become mum to 2 other very different children, becoming in the process a rather different (read "cool") mother.
I have felt in recent years the need to go away from time to time on my own, though never for long as I would miss my children and even the Hub after more than 48 hours. In even more recent times, I started to toy with the idea of taking one child with me each time I go away. As they grow older, I realise that the time draws nearer to the day when they would leave the nest and leave me to my own devices. It is important for us to bond when we can. 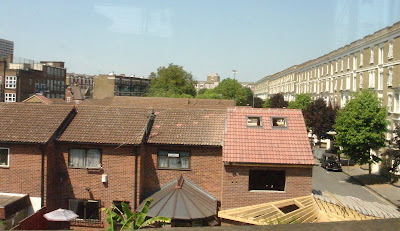 London and its surroundings are filled with housing like this
On my last trip to London, I brought the Teenager along. I had to limit my shopping to just one afternoon, and he wouldn't complain as long as he had some fried chicken just before and a few items from the boutique itself (he's into branded clothing nowadays). I knew of a few fried chicken shops in Hackney near the Burberry store so everything went according to plan. Except maybe the huge credit card bill that I managed to run up in just 2 hours... 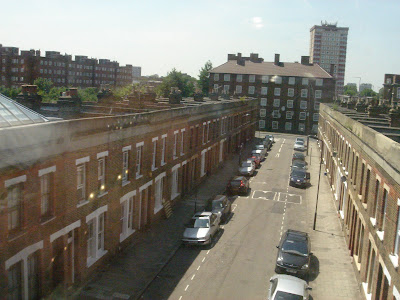 View from the train between Liverpool Street and Hackney Downs
I got him his own Oyster card and brought him to a seedy colourful neighbourhood, passing by rows of council housing along the way. It was a very hot day and I was amazed at one point (on the train) to see Pakistani, Sikh and Indian women in their own costumes standing in little balconies in this building facing the tracks. Wish I had a camera fast enough to capture this scene.
We stayed at my usual 3-star haunt in Bayswater. Accommodation in London is often expensive and lousy so I didn't have high expectations of our room - just that for more than £100 a night it should be clean and contain big towels and comfortable beds as promised. I like being in Bayswater because almost everything I need could be found there.
We had dinner at my favourite Chinese restaurant Gold Mine famous for its roast duck and other roast meats. Then we watched Sex and the City 2 at the Odeon cinema in Whiteleys. He is under 15, but they let us in anyway probably as I was with him and as we were the only clients that evening. Yeap, had the whole cinema to ourselves!
We didn't have any heart-to-heart talk as I didn't want to sound like I've brought him on holiday to nag at him. We just did things we both liked and tried to enjoy the rare time we had together just the 2 of us. I did tell him that I couldn't buy him a Playstation 3 console as his school report hadn't been fabulous and that in another époque I would have freaked out over his below-average grades.
And my baby has grown up. Till a few months ago Hub liked to joke that the boy had a smaller bird than his little brother. And I was starting to worry about my son having a complex because of that. Well, puberty arrived and gave him the last laugh. Big laugh.
Publié par Beau Lotus 涟 à 23:06

I laughed out of my head at the end of your post! :)

Gold Mine is indeed popular cos my Sg friend brought me there when I went London for a worktrip.
Wish I could get more SE Asian food over here in France.
~~sohcool