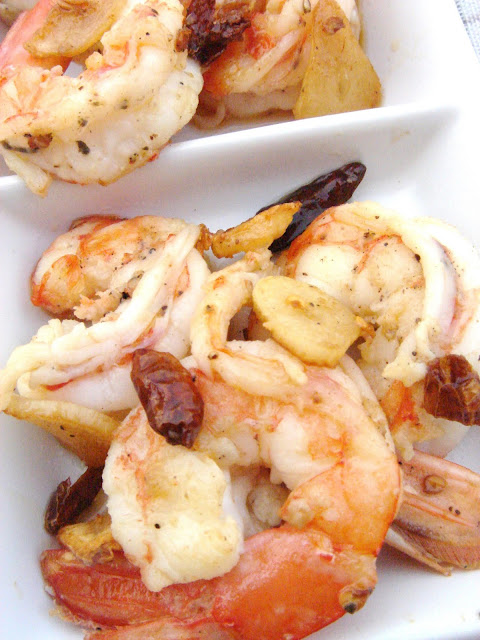 The Sangria had to be eaten with something. I have blogged about my Gambas al Pil Pil many years ago, but even those of you who have been with me right from the beginning would remember - nothing much of it. It was a chore trying to find the recipe among my ramblings, so I've decided to post it again. Especially when it's a short one and makes me happy as I savour the dish again in my mind.

This was a standard tapas dish that we would enjoy in our so many nights out drinking away when we were living in Andalusia. Dinner doesn't usually start till 10pm in Spain and a little before that we could have a drink at the bar and nibble on a few things - or make the tapas our dinner. We only had the Teenager then and he would run around with other children in the restaurant or just outside, usually watched by the old grandpas or grannies chatting away nearby. When you think that I get nagged at by so many French people because my kids do not go to bed before 8pm - they obviously hadn't lived in Spain.

Gambas, clams, sardines, anchovies, squids and so many other fish were easily available where we lived. I never used to like olive oil until Hub started working at Martos - the 1st olive oil producing region in the whole of Spain. We bought top-grade olive oil from the co-operative by the 5-litres and cooked almost everything in it. And the Andalusians sometimes like their food spicy because of the Moorish influence in their culture. What better accompaniment for glass after glass of sangria or tinto de verano than little clay dishes of Gambas al Pil Pil?

In my earlier post, I blogged about the more traditional way of preparing the dish using clay dishes (cazuelas) and baking them in the oven. I've always found that pan-searing the prawns works just as well so that's what I'll blog about today. 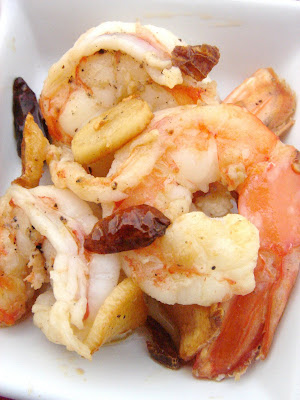 In a frying pan heat up a good amount of olive oil and fry the sliced garlic and chillies till fragrant.

Add the gambas and sear them on both sides. Add salt and pepper to taste.

Pour in the white wine and mix well.

Garnish with the parsley and serve hot - preferably with baguette to soak up the (very hot) sauce.
Publié par Beau Lotus 涟 à 10:01