A Quick Trip to Milan 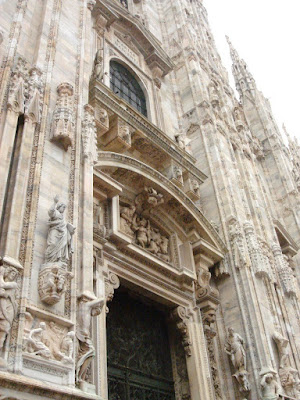 The Duomo
I repeat myself. But I am quite afraid of driving without Hub into big cities. Though when he's not around, nobody is there either to point out my mistakes to me and make me feel silly. Besides, the car is registered in his name. If I get a fine, he gets the points.
The boys need a new passport. They need to look like terrorists in their photographs so that the immigration authorities could pick out the real terrorists from the lot. I had to spend a small fortune chez un professional photographer so that he could figure out the dimensions that the French Consulate had given me for the photos : 3.5 x 4.5cm; min 32mm and max 36mm between the roots of your hair and the chin; white background; mouth closed; no smiling. 17 euros for just 4 photos required.
Then you couldn't just apparate from Modena to Milano at no or even little cost. I studied the options for transportation to Milan and while the train seemed the safest and most convenient choice, it is also the most expensive : 80 euros each way for the 4 of us. Not to forget the trouble getting into Modena and parking the car at the train station.
"Why don't you drive there?" Hub asked. "Do I look suicidal?" I retorted.
But then, I figured that even if I should get filmed by one (not more than 2 though) of the cameras, it would cost almost the same as the train - so I could just take the risk. I went on Facebook and asked my friends for their opinion(s). "Take the train!" advised everybody. All the more reason why I should drive. I just love doing the opposite of what I was expected to do. 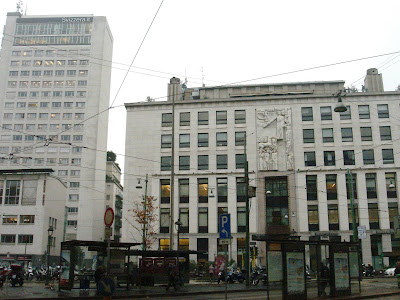 Milan
Picked up the kids from school just before lunch (so that I do not look like a bad mother who would take the day off for 2 passports) - to the children's joy. They ate their yummy ham sandwiches in front of their camarades on the way to more tasteless pasta the canteen, and a few of those kids actually cried and asked if they could have some of our sandwiches too. I shouldn't be too gleeful as we have already paid for the school canteen beforehand and you don't get any refunds for nonconsumption. 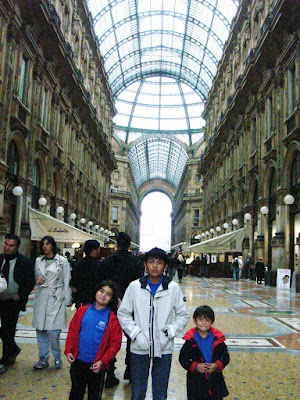 The 3 kids wanted to go to McDonalds
The drive to Milan was quite smooth except for a glitch at the beginning caused by the stupid GPS that made me drive an extra 20 kms for nothing. And it rained very heavily along the way. Still, I managed to keep an average of 135 km/h on the highway, thanks to the training I've received in Germany years ago on the Autobahn. Actually, I quite enjoy driving. Only I can't eat, drink or talk while at it since I'm incapable of multi-tasking. My fried seafood lunch from Conad had to be allowed to turn cold. 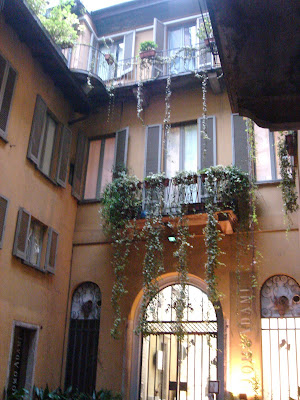 A courtyard in Milan
The plan was to drive to San Donato and park there. Then take the metro line 3 and stop at "Turati" where the consulate is. The only problem was that I could see the multi-story carpark but couldn't figure out how to reach it. Ended up entering a bus bay which probably would earn me a fine. Postman, please, you couldn't find me. 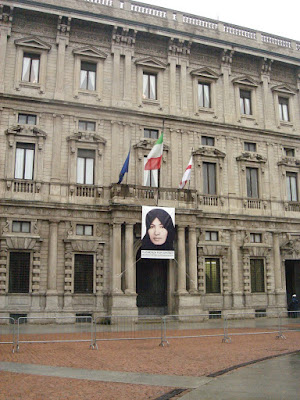 Milan protesting against the stoning of Sakineh
It was still raining when we were in Milan. The Consulate staff was waiting for us since we had an appointment and managed to arrive on the dot. It took a good hour to fill out forms, record the boys' fingerprints etc. And we were the only clients there since officially the Consulate was already closed. They only allowed us to come in the afternoon because we had to travel from Modena. 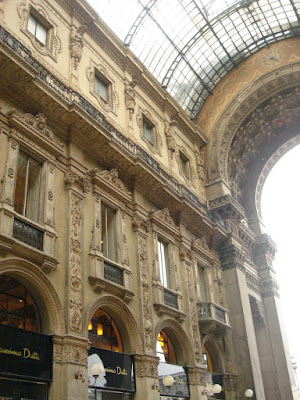 Galleria Vittorio Emanuele II
Having taken all that trouble to drive to Milan, I decided that we should do a bit of visiting before we left. Walked to "Duomo" and window-shopped in the magnificent Galleria Vittorio Emanuele II before touring the Duomo. The latter is enormous and has a very beautiful white marble façade. However, I didn't like the interior. It was too dim. 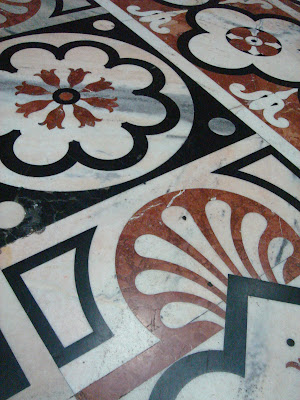 The floor in the Duomo 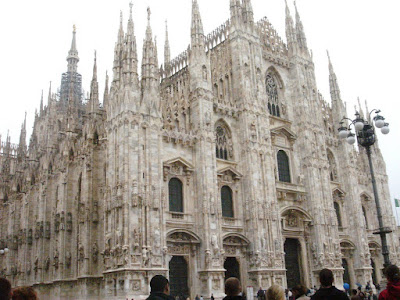 Milan's Duomo
The way back was quite fine too. There were traffic jams between San Donato and the highway leading to Bologna, but it must be nothing compared to what would have awaited us if I had driven to Milano centro itself. I therefore esteemed myself lucky for that. 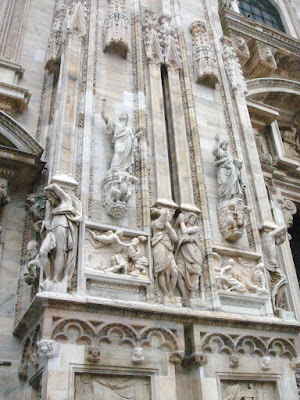 Façade of the Duomo
Will have to return to Milan in a few weeks (always with the kids) to collect their passports. Sigh...
Publié par Beau Lotus 涟 à 21:17

Oh MY! OMG! You did not go to "La Rinascente"??? You want all the way to Milan, and you did not go shopping to La Rinascente http://www.rinascente.it/webapp/ . Oh MY!!!!
Naughty girl. They have ALL designers and more concentrated on 4 and 5 floors. EVERYTHING!!!!
Lats time I went there with Hubby, in June, I told him that I did not understand why you bothered to go to London, when everything was in this shop.

Hello, try shopping with 3 mad kids. Shopping has to be fun, or it wouldn't be worth the time and money.

Plus I'm going to London in a few weeks :-). You don't want everything under one roof, you like it when they are a bit dispersed. It's the hunt...

And actually I'm quite broke. I need to save nearly 10000 euros in a few months if I want those Poltrona Frau armchairs.

But nice to know that you think of me sometimes LOL