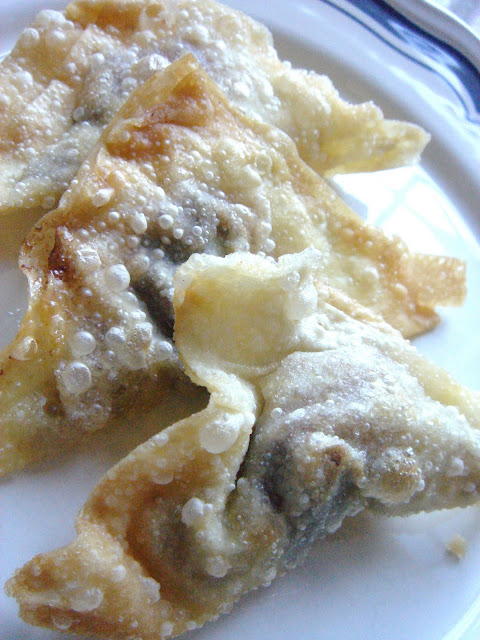 The new batch of won ton skins from the Chinese shop here is quite fine - made in Singapore. I decided that they would be great for making Fried Chocolate & Pecan Nut Won Tons for the kids' afternoon tea. That is, before I ate them all up myself.

Lunch at MB's was lovely as usual, there were a few new mothers among us so it was an occasion to get to know them better. Will post pictures after I've gone for a few other lunches in the fortnight to come. I know that I give the impression that all I do is eat. Which is very true actually. Not very intellectual, is it?

I was asked once if I wouldn't like to set up or join a book club here. Much as I love reading, I do not feel up to discussing a book in a group. It will remind me too much of the years I've spent in tutorials for English and later European Literature. I've even Literary Criticism as part of my A and S Levels (for those of you from NJC, the marvelous Mr D. Whitby was my teacher!). And at University, I had to suffer Homer and the like and often felt like an idiot in group discussions (I mean half my class went on to obtain Doctorates in the subject!). I wonder if it's only people who never had to study English Lit, be dissected alive by fellow tutorial mates and meet deadlines for written papers who'd make enthusiastic book club members. No thanks, I really would prefer to eat.

Last evening we went to watch Shrek 4 in English at the cinema. And dined at Old Wild West after that. Hub was away team building on the race tracks of Mugello and eating Fiorentina steaks in Tuscany. He also came in first in their kart race. Those few rounds he did recently at Fiorano in a few Ferraris probably helped.

Fill each won ton skin with a mint leaf (if using), a piece of chocolate and a sprinkling of crushed nuts. Seal the sides with a bit of water or egg white. 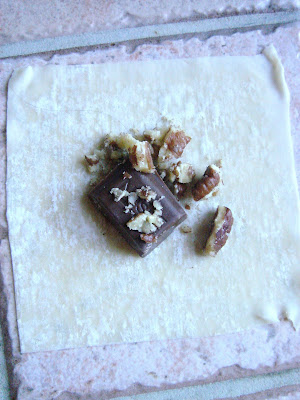 Actually one can fill the sweet won tons with almost any type of chocolate, fresh or dried fruit (e.g. banana, raspberry...), nut(s) and/or sweet vegetable (e.g. pumpkin). It's really very flexible. Just make sure that it doesn't contain too much liquid or it'll splutter during the frying. Dipping sauces (e.g. chocolate or fruit) could also be made for the fried won tons. 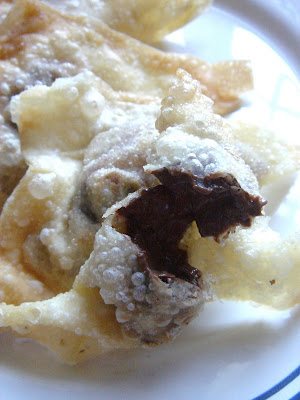 Hey, thanks for sharing your stories! I actually have thought of taking English/creative writing/English Literature as my major. Then, I gave up on that thought. I'm not that confident ... since English, for me, is still a second language. I'm unable to bombard others with Shakespearean English. That's too much for me! But, I do love English, as much as I do for my mother tongue (Chinese).

I've seen others turn wonton skin into dessert. I bet it should be nice. But, I'm still not sold. LOL! I'm conservative in this sense. HAHA! Shame on me!

Btw, thank you so, so much for the encouraging words you've given me! I truly appreciate your lovely thoughts. Thank you!

Hi Pei-Lin, my stories are for me really since one forgets with age and I am trying to help myself remember along the way.

Language is about expression and importantly, self expression. Would you bombard yourself or your colleagues with Shakespearean English? What is important is to be able to make yourself understood and occasionally to be able to have fun playing out the intricacies of the English language. It's like sharing a private joke with people who know what you're talking about.

Confidence comes with time and experience. And sometimes you just need to go ahead and give yourself some - as long as you're not afraid of failure. Well you know what they say about failure being the mother of success. :-)

When one reads your blog, one reads about your passion for so many things - your family (both biological and adopted), your friends, your baking...I think that that is wonderful coming from someone as young as yourself. You still have a lot of time to grow and you are lucky to live in a time when you have access to so much knowledge and friendship on the WWW.

Sweet wontons do take some getting used to, but even my late grandfather (who died more than 20 years ago) had cooked us sweet egg noodles. And they were so delicious I regret not knowing his recipe.