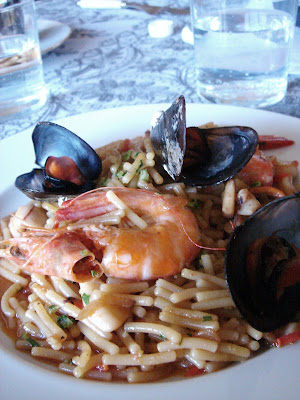 LY's Fideua
We have come full cycle when LY demonstrated Catalan cooking to our cookery club - 6 lessons, 6 different cuisines since we started our club in April this year. And we will start over with CT's turn (again) in a few weeks, at a more sustained pace this round as we really enjoy coming together to cook and eat. Besides, I need to have my turn since we'll be leaving Modena sometime early next year.
Now, LY was not born Catalan. Though she became one when she married her Catalan. This means that we'd probably do Syrian the next time ha ha. The wonders of mixed marriages giving us ever more cuisine options for the cookery club - without having to take in extra members.
The menu that morning was : Escalivada, Fideua and Brazo de Gitano. Yum yum. 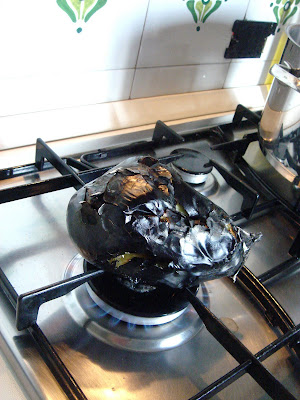 For those of you who are not familiar with Spanish cooking, escalivada is a typical tapas in Barcelona where tomato puree is spread on toasted bread which is then topped with roasted aubergine and peppers and preserved anchovies. We learnt something new that morning, namely that you could roast aubergine quickly by placing it directly on the fire. But be prepared for some messiness. 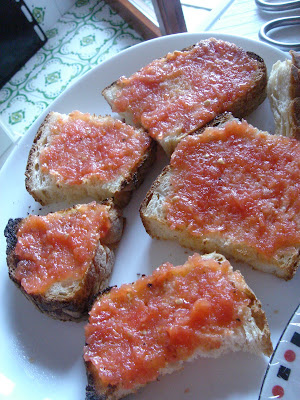 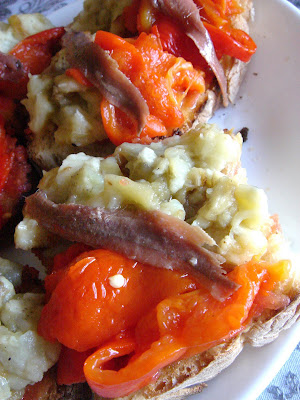 Escalivada
Meanwhile, Fideua is the noodle version of the famous paella and LY's version was absolutely delicious, made with freshly-made fish broth and prettily-presented. 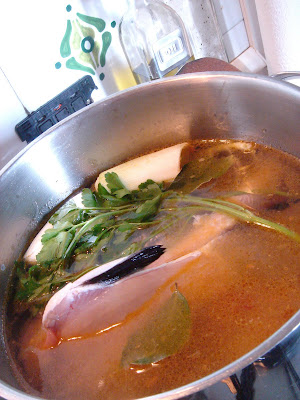 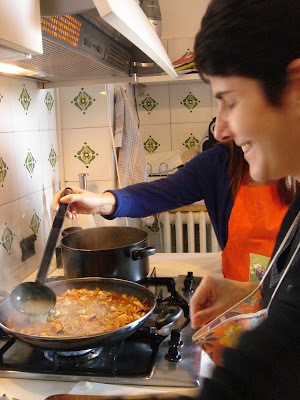 Ladling fish broth onto the fideua
Brazo de Gitano is actually a swiss roll, easy to make and so lovely to finish a meal with. 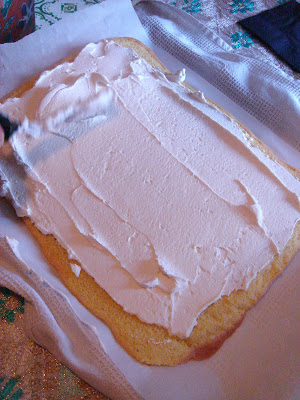 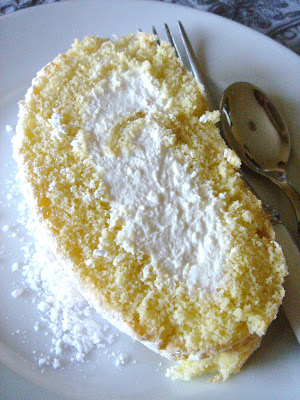 Brazo de Gitano
We had a great time as usual and were running a little late since we started out with coffee and talked too much (especially me). And CT wasn't around in the early part of the morning to help cut and chop as he had Italian lessons and his fabulous knife skills were sorely missed :-).
It is difficult to imagine leaving my cookery club friends behind in a few months. I would have to join GA in becoming the next empty chair. Mais c'est la vie, I'll hopefully learn new tricks and recipes in my next destination and if God wills, maybe make friends as wonderful as the ones I am going to say adieu to soon.
Publié par Beau Lotus 涟 à 19:08

we love fideua, tried the thin beehoon and thick mee version but i would say nothing beats our char beehoon and fried hokkien mee :) if you think the same, you may want to cook either of that and let your spanish friend try.

That all looks DELISH! My jaw dropped a little at the roasting eggplant. Just how messy does it get? Because I would love to try it!

YL, you're making my mouth water with the mention of fried hokkien mee...We're moving in Jan so hopefully sometime next year will be able to eat in Sgp again!

Hi Natalie, it did get quite messy with the juices flowing out of the vegetable, but it cooked fast this way and also gained a smoky taste.