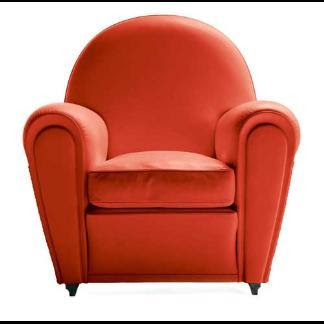 I want this. A pair of them. Poltrona Frau's mythic 1930's Vanity Fair armchair. More than 4000 euros each. Beautiful, isn't it? Should I have it in red, black or brown?
"Vanity Fair is a replica of the celebrated 904 model that was part of Poltrona Frau's catalogue in 1903 and became an archetype after which modern armchairs have been patterned ever since. It is known the world over for its typical rounded shape and the rows of leather-covered nails that add the finishing touch to the seatback and arms. The padding uses both hand-fashioned vegetal horsehair and rubberised horsehair, the seat cushion is filled with goose down. The springing of the seat, back and arms is by means of biconic steel springs, tied manually and rested on jute belts."
(source : Poltrona Frau)
It is also known as the Ferrari of club chairs, as Poltrona Frau makes the leather interiors for Ferrari Automobiles. 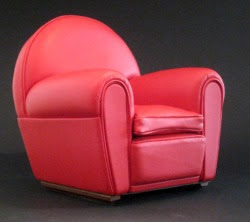 Now you know why I want this. Could I, pleeease?
Publié par Beau Lotus 涟 à 10:46

Watch out though - I think the chair on the second picture is a knock-off. If you look at the front arm post, the cushion, and the legs, and you compare it to the first picture, there is something off with its execution.

Hi, thanks, I wouldn't know the difference, I just thought the side view was cool. Whereas the first picture was from an authorised agent.

But when and if we buy them, we'll be getting them directly from Poltrona Frau since my Hub has direct business dealings with them.

Red definitely! And yes, the two pics are different. The second one is rounder.

I'm between red and brown and Hub wants black...

We're going to check out the PF store in Bologna this weekend to see the armchairs, pictures are often not the same.

Hi there...let me help you with this one. The 1st picture is of a NEW Vanity Fair chair...and the 2nd one is an 'OLD' #904 chair(probably the actual 1930's version which are limited and numbered on a plaque on the back. I have a picture of a plaque if you would like to see it.

I have an original #904 chair and loveseat in black in excellent condition that are numbered I need to sell. Feel free to contact me @ lyssa.foster@yahoo.com!

Hi Lyssa, thanks for the clarification!

However we've been to the Poltrona Frau shop a few days ago and have decided that we like the new VF in red (Siam) or brown (Bruno) and in any case we prefer to buy directly from them.

Thanks, anyway, and hope you'll find a good new home for your chairs.