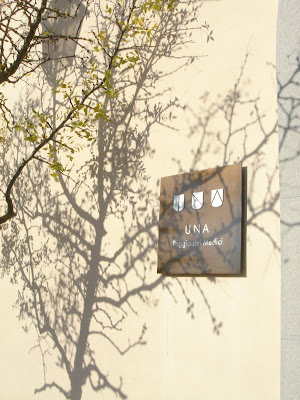 UNA Poggio dei Medici Golf and Spa Resort
That last morning at the gym, they weren't showing a cooking programme on TV so I spent the 10 minutes I was walking (very slowly) on the treadmill looking at the old people around me. They spend their mornings there, rain or shine. And every one of them is fitter and slimmer than me. And I'm not yet 40.
Some of the men strutted around like proud peacocks (but this is typically Italian) and best not to cross eyes with them or they'll literally start to preen. The women however were less vain. And I could see traces of the beauties that some of them used to be. And they must have broken a number of hearts in their youth so pretty they still are today.
With these thoughts, I started staring at myself in the mirror and felt sorry that I wasn't meant to be a beauty in this life, that when I become an old witch later, nobody is going to look at me and think that once I've been young and beautiful too. I also wonder if the wrinkles would just turn up overnight, or if it'll be a slow process that will take place over the next 20 years. As it is I'm trying not to smile too much nowadays, but not frowning when you have 3 kids is more than impossible. 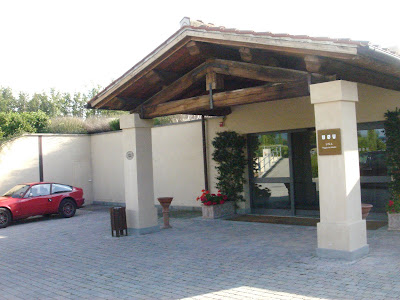 Entrance to the Golf Hotel and Spa 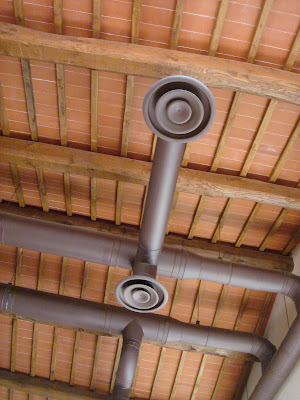 The ceiling
On Saturday Hub woke us up early so that we could go to UNA Poggio dei Medici Golf and Spa Resort in Tuscany for a golf competition - you may remember the men's search for the still elusive handicap. They didn't obtain their handicap - only painful feet and a sore back. But the golf course was beautiful, set in rolling hills next to the Mugello International race tracks. They played with a colleague of Hub's and probably inspired by this mediocre father and son pair, the guy played like a god that morning. 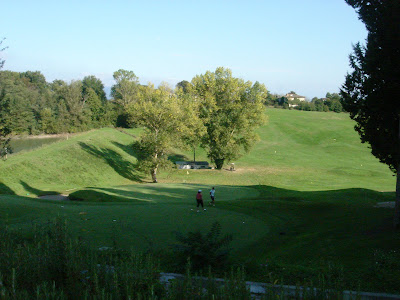 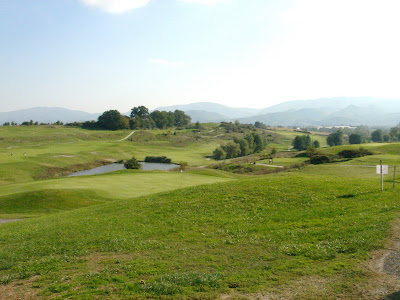 Even the view from the driving range is fabulous
While the men were playing their 18 holes, I, under Hub's urging, drove the Babies to the Barberino Shopping Outlet for a spot of shopping. Honestly I thought that I had nothing to buy, but of course put me in a shop and I ended up spending the Greek minimum monthly wage in 3 hours. 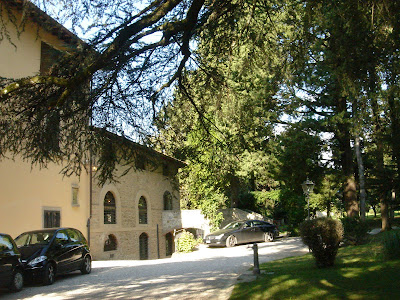 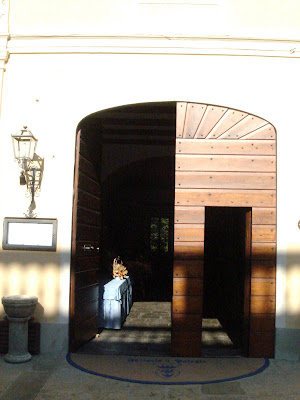 Fattoria il Palagio, Scarperia
Hub reserved a table for us in Scarperia for lunch so I had to leave the Outlet after just one boutique. He insisted that we try the Fiorentina steak in Fattoria il Palagio, so that was what we did. The restaurant's situated in an 18th century villa (I think they also rent out rooms) set in a vast park near the Mugello race tracks and he was there last week with his team for a team-building session. Liked the food so much (would also recommend their roast suckling pig and selection of wines) he apparently told the waiters that he would be back with his family soon. So I had to fulfill his promise for him. 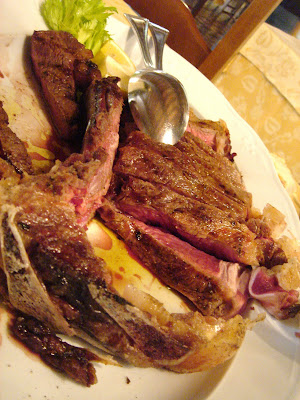 Our Fiorentina steak
And so it was good our Fiorentina steak (but I felt some pain paying 57 euros for it) and the service was attentive especially after I've mentioned who I was (Hub insisted that I do so - I'm usually too embarrassed to name drop - and he even called me up during the meal to check things out). I wonder though if I shouldn't have tried the pasta dishes or the piglet, they all sounded so good. The olive oil on the table was excellent (we were in Tuscany after all) though the Babies noted that the bread was tasteless - yes, there is usually no salt in Tuscan bread. They used the same balsamic vinegar that I do, and I discovered that my landlady "AGGAZZOTTI" (or some branch of her family) still produces their own balsamic vinegar for sale. 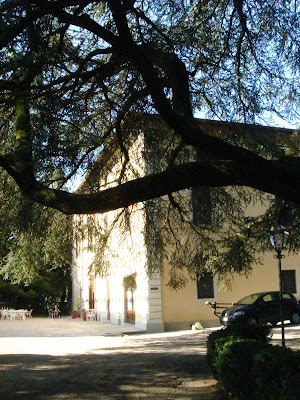 The entrance to the restaurant 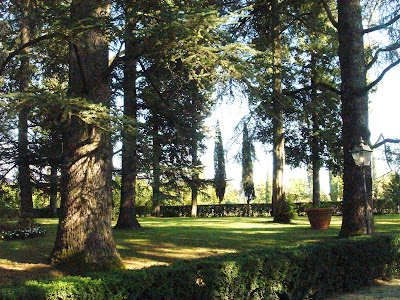 Part of the grounds
After the golf club we drove to Bologna to visit the Poltrona Frau shop there before it closed for the weekend. The boutique is situated in an old building with frescoes on its walls, so it was quite an interesting visit. I like that part of the old town very much, it's charming and has some very interesting boutiques.
Would you believe that they sell the Vanity Fair armchair in 90 colours? And I thought they only have it in 4. Now we're in a dilemma, we have no idea which colour we would like to have ours in. We like the classic red (Siam) and the brown (Bruno), but the former is kind of difficult to decorate a room with. We've gotten samples of the 2 colours and will be meditating for a few weeks on them. Maybe I'll go around asking everyone what they think.
After that we had dinner (at the Indian restaurant Taj Mahal) with one of Hub's former apprentice who is today an important Director in his own right. The young man has followed Hub when he moved to the Fiat Group so he's now working and living in Bologna. You know that time passes really quickly when those former apprentices then fresh out of school are now doing so brilliantly, with their own families and have even more children than you do.
Voilà that was my Saturday last weekend for me to remember. We should go to Tuscany more often (if we survived all those speed cameras along the way) as it is a truly beautiful region. But you can feel the cold in your bones now, I figure that we would be hibernating instead very soon.
UNA Poggio dei Medici
Via San Gavino, 27
50038 Scarperia (FI)
Fattoria di Palagio
Viale Dante 99/101
50038 Scarperia (FI)
Tel : 055 846376
www.fattoriailpalagio.com
Publié par Beau Lotus 涟 à 21:28

OK... I don't know what you are talking about! Unless you've been posting fake pictures of yourself, you are one gorgeous woman! Even my husband thinks you are hot! OK... this wasn't meant to sound creepy...seriously, you are one hot mama!

Wow, you have very good eyesight, how do you manage to see me in that small profile picture? :-)

Beauty as we know is in the eye of the beholder. I guess I'm just not my own kind of woman...