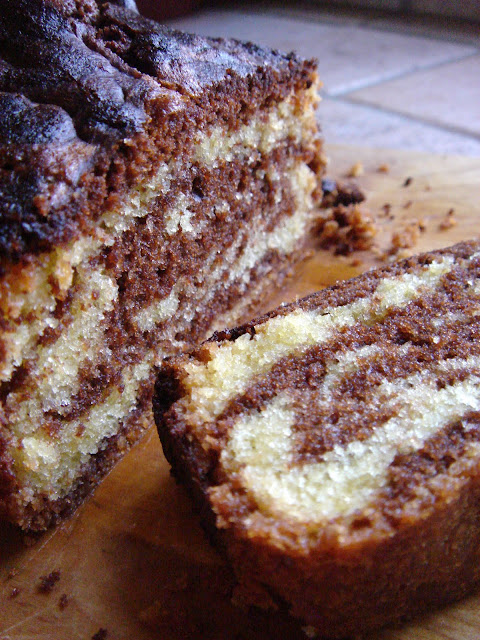 He was dipping his finger into the batter as I was preparing it. Then he kept asking every 5 minutes when the cake would be ready. I chased him out of the house to play outside so that he would leave me alone. Now, where was I?


I was baking him a Vanilla and Cinnamon Chocolate Marble Cake. It's an easy and pretty cake and a crowd pleaser, so the decision had been easy. 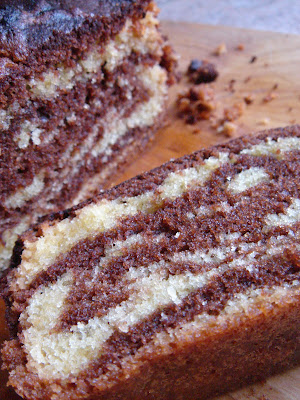 
Put the milk and chocolate (in small pieces) in a bowl and microwave for 1-2 minutes. Stir to melt the chocolate in the milk and obtain a smooth chocolate mixture. Leave it aside to cool a little.


Sift the flour, cinnamon and baking powder together. Fold into the butter-egg mixture.


Pour slightly less than half of the batter into another bowl. Add the chocolate to that batter and mix well.


Line a cake mould with baking paper. Pour a layer of the white batter into it and then a layer of the chocolate batter on top. Alternate till you finish both batter. Using a skewer, give the batter a few twirls to create the marble effect.

This cake look moist and nice, but my kids don't appreciate cinnamon..

Oh nice! :) May I ask what´s "vanilla extract"? Is that from the vanilla pod? Also, dark chocolate, is that like the solid type???

BTW, I tried making Singapore chicken curry again yesterday. And I can´t seem to get it as "red" as yours. Do you know what I can do to change it?

Vanilla extract is liquid from the vanilla seeds whereas vanilla essence is normally artificial. I prefer to pay more.

For the curry, it's difficult to know without knowing what you put in your curry, but usually I find that really frying your spices in very hot oil helps.

But watch out not to burn your spices!