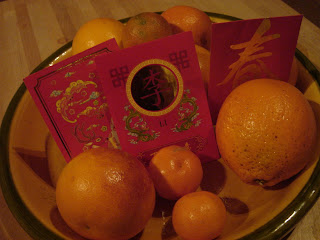 Angpows for the Kids
In Paris we managed often enough to eat steamboat with our Chinese friends but over here in Modena we do not know the meaning of festive nor of Chinese New Year so we've had to make do with a simple dinner just the 5 of us in our humble kitchen. Only difficulty was actually having it together, the Hub still not arriving home at a quarter past 8 in the evening...
I emailed him. Reminded him that we had a reunion dinner in waiting and that we were to eat it together - unless he's not part of the family. A few minutes later, he rang home to say that he would be back shortly.
The poor guy. Lots of work and difficulties at the office. Not a fabulous start to my year (yes, I'm a Rat with all its qualities haha), with me down with gastric flu and Eldest Son (another Rat but only with all its vices) giving up already on his earlier resolutions to be a better and more hardworking student. 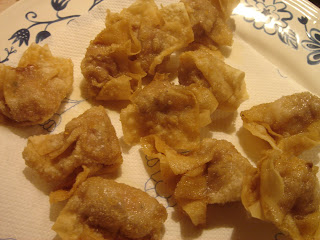 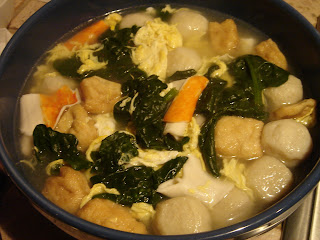 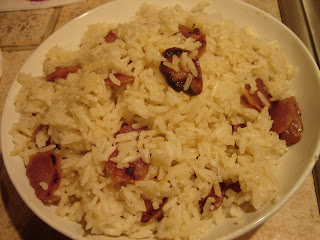 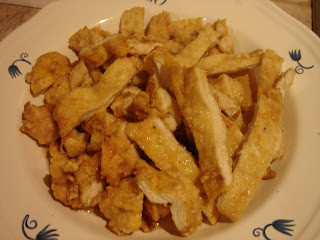 Anyway, after wrapping up the angpows (red packets) for the 3 kids, I prepared a simple dinner : Pork Rib Egg Drop Soup filled with lots of Fishballs (from Singapore), fried Tofu, Spinach, Surimi sticks, home-made fried Won Tons...Followed by Lemon Chicken, Rice with Chinese Sausage, and for dessert, a Red Bean and Matcha-Almond Galette des Rois inspired by Umami's posting on this Japanese Azuki Bean Galette that she had in Paris. 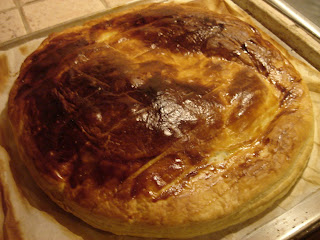 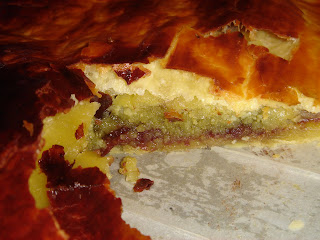 Matcha-Almond & Red Bean Galette des Rois
The Galette turned out nicely and the Hub who has a phobia of red beans eaten sweet actually liked the change from the traditional Galette. Eldest Son who normally doesn't eat cake ate 2 slices of it!
Well, that was my reunion dinner. Simple and quiet. Still, I look forward to a Happy and Prosperous New Year and wish the same for all of you. Gonghei Fattchoy Gongxi Facai!
Publié par Beau Lotus 涟 à 18:17

Gong Xi Fa Cai. That's a wonderful reunion. Lucky you only got three ang pows to give hehe.

hey s. So nice! I bet yr soup was nicer than our steamboat soup with the singaporeans in stuttgart. The variety as good but the soup cannot make it...oh xing nian kuai le!

Yeah only 3 hee hee and somemore I take back the money after that since they do not have bank accounts here in Italy LOL.

Pris, the soup was excellent, even the kids loved it and kept asking for more. I'll post the recipe. Very very simple.