What have we been eating? 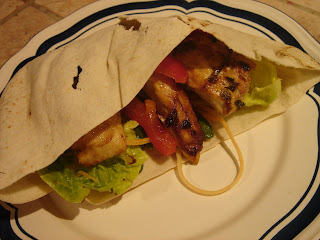 For a while I resisted this vegetable/salad as I didn't like its name for some reason. You find it almost everywhere up here in the North - cooked or raw. Then we were walking through the covered market in Modena MIL and I and she kept telling me that those leaves looked great and that we should get them. I still resisted (poor woman). 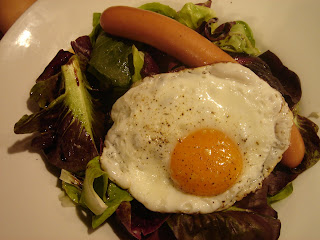 Radicchio with German Sausage and Fried Egg
But Lotus' bark is often worse than her bite so it was a matter of time before she gave up and try out the object of curiosity. Radicchio. A leaf chicory also known as Italian chicory. It is grown as a leaf vegetable (e.g. in Veneto) and usually has white-veined red leaves. It has a bitter and spicy taste. You eat it raw in a salad, cooked and mixed in a risotto or even grilled. 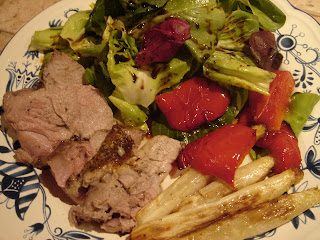 With Roast Lamb, Grilled Red Peppers and Asparagus
My first radicchio I bought in Montale in a small shop where they cost twice as much as they would in a supermarket. But I was in a hurry and didn't want to go too far away. The seller was alone and true to her reputation, tried to offer me coffee so that I would hang around and she could tell me some of her stories. Not even my lousy Italian could stop her.
Anyway, the result was that for at least 2 days running, we had radicchio with something. 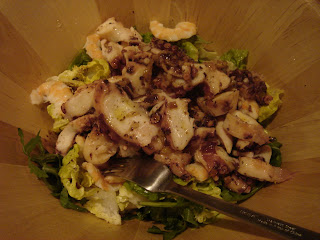 Garlicked Octopus on Salad Leaves
Then I decided to look into Octopus. Found plain cooked ones in Esselunga and just cooked them with garlic, olive oil and parsley, squeezed some lime juice over it and serve it over a bed of salad leaves seasoned with balsamic vinegar and olive oil.
One other thing that caught my fascination the past week was Mushroom. I got a mixed bunch of them (including Funghi Porcini) and made a pasta and then a risotto with them. They are really best eaten simple : cooked for like 10 minutes in garlic, olive oil, fresh herbs, salt and pepper. Served on a bed of plain pasta or pasta with tomato sauce, or with risotto. 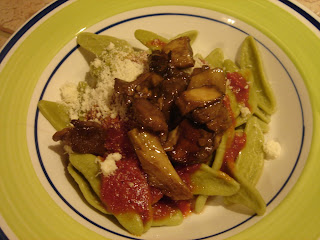 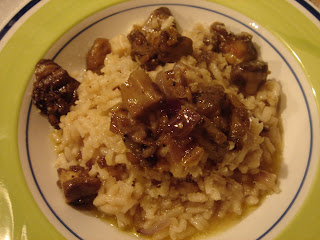 Mushroom Risotto
Actually that was one very Italian week, wasn't it?
So after that, I decided to return to more exotic stuff and you found me making Peking Duck on Sunday, followed by Pan-grilled Moroccan Chicken in Pita Bread. 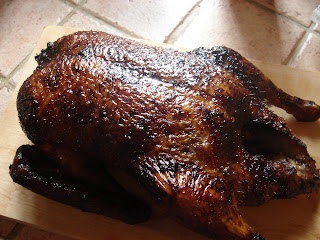 Peking Duck
In one of my older blog posts, I had a recipe for simple Peking Duck. Sunday saw me ready to make a slightly more complicated one, paying more attention to dry roasting the spices before mixing them to the soy sauce, wine, sesame oil, honey etc, and especially to the preparation of the duck for roasting (e.g. pouring hot water over the duck, drying it out etc). Still, it was not the full-blown traditional method but it was good enough for a simple Sunday lunch. And I made the crepes myself too.
Publié par Beau Lotus 涟 à 17:56

What an interesting spread. I would love to be in Italy for all its great food.

Eh aunty, I cooked all that so you wouldn't need to be in Italy, just need to be a casa mia :-).

Seriously one eats well here. Only complaint I have is the variety.

I know you cook that lah, in Singapore to buy all those ingredients will cost a lot and only can get at specialty shops and not even sure if can get all the ingredients. Aiyah, I also wish I can visit you. We also eat well here, only different kind of food. Hehe.