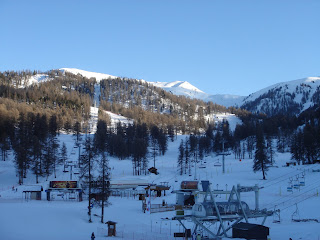 The ski holiday I was looking forward to and yet dreaded at the same time turned out to be the best thus far - thank the Good Lord. Almost one whole week of clear blue sunny skies, lots of snow (it snowed most nights when we were in bed), few skiers around (non French school holiday period) and therefore kilometres of snowy slopes almost all to ourselves. And I escaped with just a slightly painful chest, a few bruises and a yin-yang face - not too bad for once.
We were first at Risoul 1850 4 years ago when Baby Girl was just a year old and I was pregnant with Baby Boy. We stayed at the Village Club Touristra-Leo Lagrange situated just a few metres away from the first ski lifts where we had a simple family room, 3 hot meals a day, childcare provided by the hotel (plus they bring the kids to and from their ski classes), activities organised day and night for our pleasure and amusement and discounts via the hotel for the ski rentals, ski lifts and ski classes. We enjoyed our stay then and have been back 3 times in 5 years since. 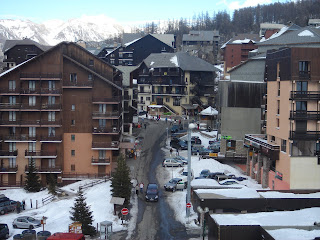 Risoul's Village where you have shops, restaurants etc
Risoul 1850 is a little station located in the Southern French Alps. About 5 hours from where we live in Modena. It is however an excellent ski resort as it is linked to the Vars station making La Forêt Blanche (1650-2750m) one of the largest skiable domains in France : 180km of slopes and 51 ski lifts. And what I really like about the station is the fact that the sun shines there almost every day, it snows quite a bit since it's so high up, you have really long slopes to ski on no matter what your skiing level is and there are valleys that take your breath away not just in terms of the view but also the skiable surface. 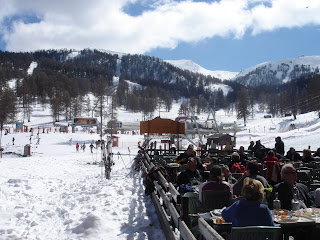 The Terrace of our Village Club facing the slopes
Baby Boy prepared for his Ourson medal with the ESF (École de Ski Française) this year, Baby Girl her Flocon and Eldest Son his Bronze Star. Everybody succeeded except for Eldest Son which came as a surprise as he's a really good skier and can ski down black slopes with ease and speed. We can only put it down to the lack of mental preparation for the exam which caused him to fail to be ready for one of the 3 tests that made up the exam. Mais c'est la vie, sitting for exams is an art that needs to be honed as I am fond of saying.
But that will teach him to be more careful and next year he'll get it. Anyway he's almost at the end of the ski exams and after the Gold Star he will be able to join his dad in the expert group or move on to the snowboard.
Myself I have no talent for the thing. Started out too old, am too scared and have no intention of breaking any bone as I have nobody to help me with the kids. This year I did Class 1 for the 3rd year running. And it was starting to be boring. Then after 2 days there were too many students in my group and I was sent to join another group. Still Class 1 but an advanced group. Great instructor (name's Doumé) who wanted to really push us and he brought us to the most amazing places to ski, including out of the slopes (hors pistes). At the end of our week, he said that we could all move on to Class 2, so I guess I'll have to hold on to my courage and join Class 2 next year. Hold still, my heart...
This year the Village Club did a good entertainment programme and we really enjoyed their cabaret, humourous sketches and PIRATES show. Better than the ones brought in by the Vars Tourist Office. I guess having a good Director (Fred) helps, the guy has a great sense of humour and it showed in the entertainment that he coordinated. On Wednesday at noon, Hub and I skied to Vars Ste Marie at 2200m and joined a BBQ lunch organised by the Village Club. We ate under the sun and it was wonderful. 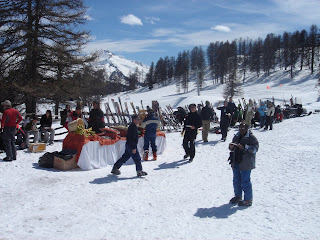 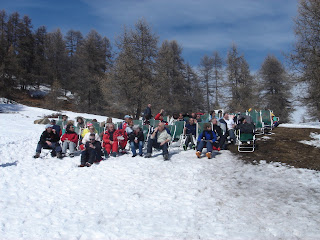 BBQ Lunch at Vars Ste Marie 2200m
The food on the whole's so-so but it still beats having to cook when one's on holiday. You get everything starting with a cold buffet followed by a hot soup, pasta, hot meat and fish mains and their sides. Then there'll be fruit, yoghurt, desserts, ice cream etc. Free flow of soft drinks and wine. Needless to say, I managed to put on another few kilos. 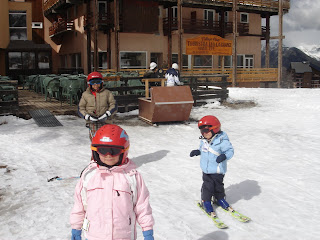 The Kids setting out to ski
By the middle of the week Baby Girl could ski down most blue slopes with ease and Baby Boy the green ones. Next year we should be able to ski as a family. The year after the Babies would all be skiing better than me. Poor Lotus.
We were all really happy to be in France. Such a really beautiful country. Along the way we passed through Briançon and saw how pretty it was. On our way back, we stopped at a small supermarket and went crazy with the variety of goods on offer. So many good things to buy, how I have missed shopping for food in France. And then of course we had to lunch at a restaurant in the region. Bon appétit!
Publié par Beau Lotus 涟 à 11:35

Yay! Snow and skiing! We are heading up to the mountains again this week! :)

Is the skiing good where you are? Do the little ones ski too? And there'll still be snow this time of the year?

After all the questions, have a great trip up there, V!