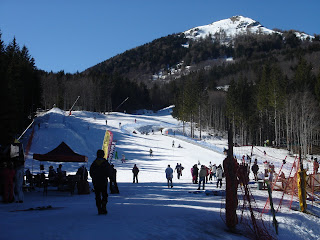 From the flat part of Modena where I live I can see mountains not far away and at the moment they are covered with snow. Actually every morning you just need to hang around the school's car park and watch the cars arriving from the mountains (e.g. Serramazzoni) and if they have snow on their roofs you'll know if there's snow up there.
The season's almost over and we've yet to ski in the Italian mountains. So I more or less insisted that we make our way up the nearest one at about 1.5 hrs away yesterday. It was a beautiful day and we had to go all the way up to Cimone as the snow had melted away below 1500m. 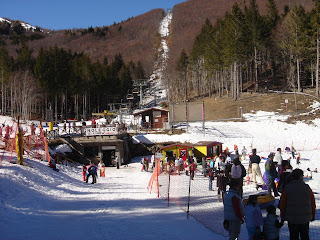 The ski rental shop, ski lifts and Baby Park
We couldn't ski as there was nobody to look after the little ones, so we paid for entrances to the Baby Park, paid for Eldest Son to do 11 rounds of tubbing, rented skis for the 2 younger ones and spent the day teaching them how to ski. 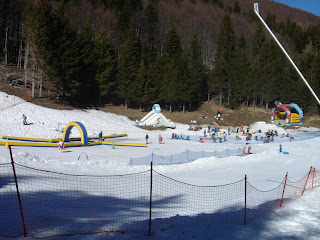 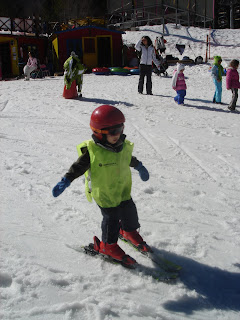 Baby Boy on his skis
We had pasta and steak in one of the 2 restaurants up there and then drove home after 4pm.
Hub as we drove off, mentioned that he overheard a few Italians complaining of the fact that we had to pay 4 euros to park in the woods. Said that they probably started out building a car park but as usual ran out of funds and then decided to barricade the road leading up to the mountain and just charge 4 euros for parking - in the woods. Ha ha. Like they were supposed to build a public pool next to our school but ran out of funds and are building a car park instead LOL.
Publié par Beau Lotus 涟 à 19:13

Oh how fun! My girl would so love that.