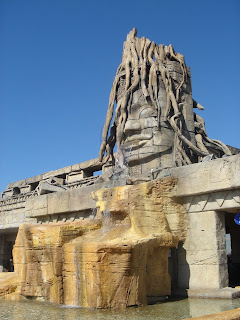 I like to tell the Hub sometimes that I am better off without him. Not that I do not live the bit about consensus and compromise, but I am often more efficient when I am on my own.
A week or 2 ago the thought crossed my mind that I should bring the 3 kids to Italy's largest amusement park Gardaland during their next school holidays. The idea itself is suicidal, of course, but Lotus is known to be sadistic and masochism is but the other face of the same coin.
I thought that Thursday sounded good. And the weather predictions seemed to agree with me. And as all things happen in 3s, Gardaland was to open for business in 2008 on the 19th of March and I was all for giving them a day to warm up and get things going.
Of course my GPS had no idea where Gardaland was. But without the Hub around to judge me, I felt adventurous and was all set to find my way there somehow. Then my dear friend E called to warn me about the strong winds round the Garda Lake area, but I didn't have the heart to cancel the kids after I've managed to get them to dress up and brush their teeth in record time dangling the Gardaland carrot. So Gardaland, here we come!
Actually the way there was quite easy. It's like going to the Mantova outlet. Then you continue. A22-A4. Exit at Peschiera della Garda. An hour and a half from Modena if there were no jams.
The parking costs 5 euros. The single entry ticket for children from 1 metre tall to 10 years of age costs 26 euros and that for adults 30 euros. For once it came to be of some use that Baby Boy somehow didn't grow past 1m though he's now 4. I was beginning to love this park.
Today was the perfect day to visit Gardaland. The sun was shining, the wind almost absent, and there were no crowds and no queues. We did almost everything. There were 38 attractions and shows listed on their map and we did 23 of them, mainly the ones accessible to children shorter than 1m. And including the Dolphin show that cost us an extra 4 euros per head. 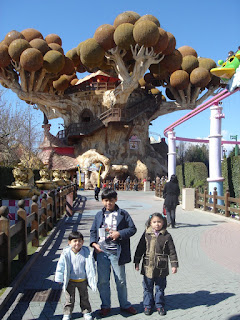 I really enjoyed the Festival on Ice show with pretty good figure skaters for a park like this. Eldest Son loved the Time Voyagers 3D show though Baby Boy got really scared and started to scream in the middle of it. The Babies loved the Colorado Boat ride and that was one ride we did twice and got really wet twice too. When the children were watching the Dophin Show, I ran off to do 2 roller coaster rides Magic Mountain and Sequoia Adventure. So-so, they gave me a headache with no thrill. I like rides that make you feel as if your heart is jumping out of your body and only those rides that throw you down from a good height can give you that sensation. I probably should try bungee jumping but with the extra weight I do not trust the ankles. There's this enormous roller coaster called Blue Tornado and I hope I'll get to try it another time. 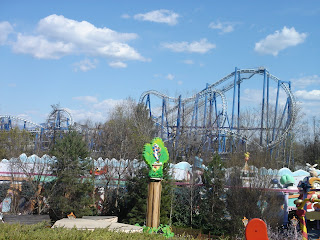 Blue Tornado
We were doing this "safari" in some African swamp Tunga and I was suitably impressed when Baby Boy pointed out to a figure and said, "That's an African!" Wow, they must have learnt that in school and I am glad that they didn't say the usual, "It's a black man!" Baby Girl then pointed out to a few African women cooking with earthen ware and said, "They have that in Kirikoo too." Kirikoo is a famous cartoon in France with only African actors and I am glad that we've bought the DVDs. 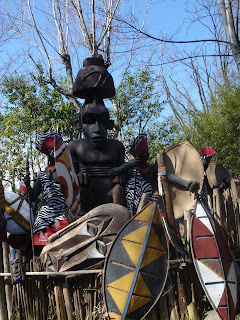 Tunga
Another cool thing about the park is that there is usually nothing to buy. Its mascot Prezzemolo (or Parsley) is relatively unknown and in any case I find it ugly. So for the sake of coming away with a Gardaland souvenir, I got the Babies a Gardaland toothbrush each. In Disneyland or at Parc Asterix, if the Hub hadn't been around, we would have emptied the shops. 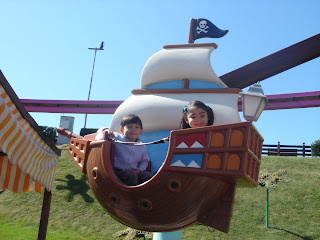 Baby Corsario
There are quite a number of fastfood kiosks and restaurants in Gardaland though half of them were not open at this time of the year. I can just imagine the number of visitors they must have normally and I shudder at the thought. Today was really the perfect time to visit. We had a very quick bite of hotdog and fries (good fries for 2 euros a packet) and I was pleasantly surprised to discover that they were not too abusive with prices like most of the other amusement parks. 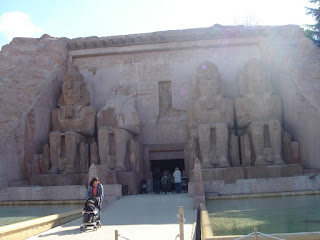 La Valle dei Re
Gardaland has a good mix of attractions and rides for children and adults and it's one of the rare parks that actually allowed adults to go on almost every ride meant for little children. The opposite is also often true, quite a number of the rides allowed most litte children to go on them as long as they are accompanied by an adult. 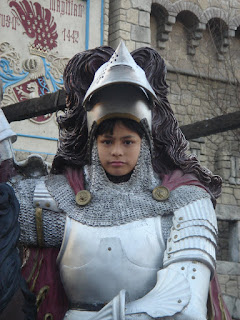 Medieval Knight
In June they would be opening a new park Sea Life and the nearby Gardaland Hotel has a very big pool. Could be interesting staying overnight. Prices are not low unfortunately.
So we had a really good day and I am really happy to have brought the kids there. I must say that every one of them behaved admirably for once and that allowed us to be efficient and to do as much as we did. Happy Birthday again Baby Boy, that, of course, was my Birthday present to the boy, having run out of ideas for presents.

That was a wonderful outing, looks like fun. I love T's jacket. Would you recommend we go Parc Asterisk? I'm just wondering if we'd have enough time.

You're a role model, I would balk at spending a whole day with kids at a parc let alone drive blind.

D, I love T's jacket too :-). Got it from either La Redoute or Vertbaudet, can't remember. And yes, I like Parc Asterix, it's near the airport (shuttle bus leaves from the RER station at T1) and I personally prefer it to Disney, for example.

Umami, I did wonder why I suddenly became so brave but I guess I like proving to the Hub that if things never go according to plan, that's because HE was around :-)

Pris, thanks for the encouragement. Keep blogging yourself too and maybe you'll go public again sometime soon!