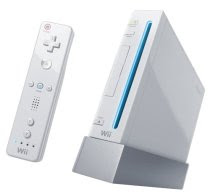 You know what they say, people have I also want. The first time I saw the Nintendo Wii was during a playdate Eldest Son had with his friend J. I thought the console looked pretty cool and playing games on a big plasma made the whole thing look even more cool.
Then on my last trip back to Singapore, one of my oldest friends L told us how he had bought the Wii a few months ago and has been spending almost all of his free moments on it. L is one of those worldly, easily-bored kind of guy so if he tells you that he has been addicted to the Wii for a few months, you sit up and take notice.
To make the turning back harder, my other old kaki One Wheel was also there allowing himself to be tempted, so I held his hand and made a pact with him : let's buy the Wii together (and try to get a good price insieme, of course).
Like the Hokkiens say, we all want it cheap and fresh at the same time, so we toured Sim Lim Square hoping to get a deal and missing it, decided to have dinner at a hawker centre instead and leave our battle for another day.
Didn't have to wait long for one good thing about One Wheel is that he is not one to leave ducks sitting, especially not when he had a lor-soh (aka long-winded) friend like me buzzing like a persistent fly at his ear.
He was on one of his trips to Beijing a few weeks later and came back with 2 Wii consoles - one for him and one for me. The setback was that the thing is all in Japanese (which reminds me that I should maybe start revising my Hiragana and Katakana), but for 500 Singapura bucks it was apparently a good buy.
The console has been sitting in front of the plasma for a month now until the Hub decided to set it up this evening. It was an amazing scene that greeted me for the rest of the evening - the Hub and kids screaming and laughing while "bowling" on the Wii. 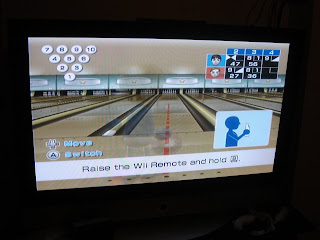 Wii Bowling on our plasma
Unlike most of the other game consoles, the wireless Wii allows the family to play together (when you have at least 2 remote controllers and Nunchucks) and you can move, walk around, jump up and down etc while you're at it. And the graphics are really good.
We currently have 40 games with us though only a few of them are the better known ones. And the machine hangs from time to time, requiring us to pull out the plug in order to switch it off. Ahem.
Thank you once again One Wheel and L for the purchase and don't forget me when you find some new and interesting game(s) next!
Publié par Beau Lotus 涟 à 21:32

Oh hehehe... my little one is also eyeing that. But she also wants an ipod and a camera. I mean, there's only so many birthdays and christmas-es in a year! %)

Ooh I played with a friend's and am now trying to convince dh to buy one.
My birthday is coming up and I have been dropping big hints.
My friend even had Wii Fit and that thing is like having your own personal trainer.

Welcome to the Wii club! Hubs bought one when it was first released in Europe and I had a mini heart attack over the price. I don't usually like console games but this I enjoy. Have you got Cooking Mama? That was what did me in. For 2 days I was cooking non-stop but nothing appeared on the dinner table, if you know what I mean. Heh.

hey, hope you are having fun with those games! I thought eldest son will quickly set it up after he returned from his holiday? I even taught him how to set it up. How come take so long? :) I haven't blog about my wii experience yet, will probably do so soon.

I've not touched the console yet. No time, too many things to do.

He had a really tough time since school started so didn't have the time to set it up before. Since then I've seen them play bowling, tennis and golf. Also transformers? How come no brain games, huh?

J, there's cooking mama but I've been so busy doing the real thing I've been dreaming of butler service more than anything else lately...

Asaaan, my my you are really into fitness nowadays, aren't you? LOL

WII was really popular here in Europe last Christmas. My auntie and mom who were visiting recently spent cold, rainy afternoons playing bowling at home. They were hooked. My auntie who had never bowled for real was able to hit strike after strike. Amazing.
The Mario galaxy should be fun for your elderest son. That is after he has done his homework. ;)

Sohcool I've only bowled once in my life and must say that when there is no weight in the hand things do seem alot easier. Baby Boy could do strike after strike too and I'm beginning to wonder if height has got to do with anything.