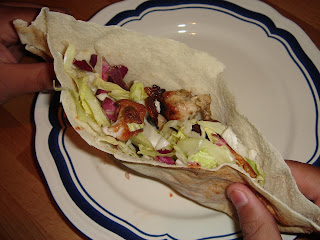 Chicken Kebab at home
I had my 1st Kebab outside Turkey and Greece in Paris. And it was twice as big as the ones I've had in those countries and probably not as fine. But it was food that I could afford occasionally when I was a student in Paris and therefore found itself a little place in my heart. My favourite kebab shop is in Place St Michel in Paris and no matter how many times it changed owners, its kebab remained one of the best I've ever had in Europe. Probably due to the subtle use of herbs.
You would imagine that kebab in Stuttgart would be good thanks to its strong Turkish population, but it wasn't so at all. Most kebab shops there resort to industrially-processed meat that tend to be tasteless, tough and too salty. I was told that many girls today actually reach puberty at the age of 8 or 10 no thanks to the strong inclusion of hormones in our meat and milk, so I'm not too hot about cheap meat or milk anymore and am seriously thinking of consuming more Bio/organic meat and milk from now on.
In Modena, I've tried a Kebab in the Egyptian shop near my place but it was very salty and didn't leave me a favourable impression. I will not be able to stack meat and roast it vertically on a spit at home, shave it and serve etc, but I figured that I could still marinate my own choice of meat for a few hours, grill it and serve in pita bread Kebab-style.
Chicken Kebab :
Chicken filet (in strips)
Olive Oil
Garlic (minced)
Ground Cumin
Ground Cinnamon
Ground Coriander seeds
Mustard Seeds
Ground Paprika
Ground Chilli
Ground Ginger
Dried Origano
Herbes de Provence
Salt and Pepper
Cider or Red Wine Vinegar or Lemon Juice
Garnishing :
Red Onions
Fresh Salad and Carrots (shredded)
Cucumber (sliced)
Tomatoes
Greek Yoghurt
Harissa
Pita Bread
The family loved it and I was accused of being stingy with the portions because everybody wanted more than one. Only managed to snap one pic and that of a sparsely-filled 2nd portion.
Publié par Beau Lotus 涟 à 22:56

Oh wow, tks for the info about milk and hormones added. Gosh, you learn new things every day, don't you? That's scary. No wonder they reach puberty at an early age these days.