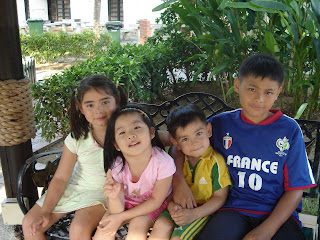 One of the regrets I have about being away is not being able to spend time with and getting to know my nieces and nephew. Like myself, my younger sister has 3 kids. Wonder if the little brother would be equally fertile.
On my last trip back, I booked a few nights at the Costa Sands chalets (at a discounted rate thanks to my dear friend One Wheel) in Downtown East and Sentosa Island with the smart idea of being near Wild Wild Wet and Siloso Beach respectively. In Singapore, if you're not careful, you could unwittingly lock the kids up at home so I had to make sure that I plan something at least every other day that would take them out of the flat when we're there. Get some sunshine and burn a few calories etc. 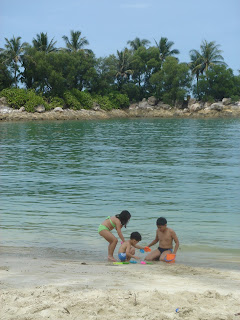 Siloso Beach, Sentosa
They call us a "concrete jungle". Didn't mean it in a flattering way, of course, but if you ask me, they weren't off the mark with the term inspite of themselves. I love the way trees, plants and grass grow so beautifully everywhere in Singapore. You can't miss the concrete, of course, but once you've been to places where when you have the concrete you don't usually also have the jungle, you'll appreciate what we have at home. I've read it somewhere that we also have more species of flora and fauna on the island than in the whole of North America. So there. 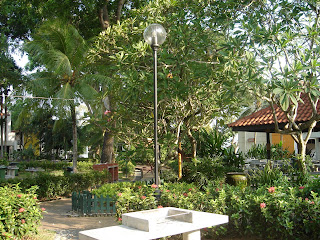 Costa Sands Downtown East
Be it at Downtown East or Sentosa, you know that National Parks has been hard at work and if you look around carefully, you may even find signs on trees, at the bottom of plants etc with the name of the species - like in the Botanical Gardens. Our chalet at Downtown East was situated in a garden with pavillons, BBQ pits and exercise parks, has a large common pool with view of Wild Wild Wet and gave us access to restaurants, a cinema, 2 supermarkets, the beach...If you book the deluxe room, it comes with a DVD player and sleeps 4. 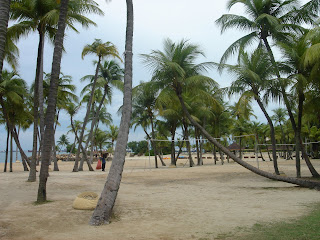 Sentosa
The chalet in Sentosa is perched on top of a little hill (take the Siloso line beach tram) and has a large pool and a mini games arcade. Each room only sleeps 2 (so we had 2 rooms) unless you go for the kampung rooms (without en-suite bathroom though). It is just a few minutes' walk away from the beach and within walking distance to almost everything else (e.g. Songs of the Sea which if I may say so was a total rip-off as you pay 8 bucks per head to watch something i.e. Musical Fountain that used to be gratis). 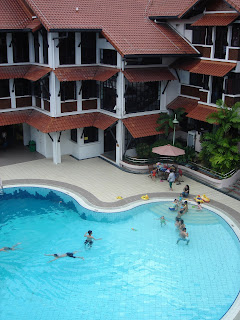 Costa Sands Sentosa
Back to what I wanted really to say, mom had the smart idea to bring my eldest niece along with us to Downtown East so that she could play with her cousins. It also gave me the chance to see how though 6 months younger than Baby Girl, she knows how to count, read and spell already (unlike Baby Girl). Meimei and her family also joined us at Sentosa and I got the chance to meet my other niece (aka The Dancer) and of course the crazy nephew. 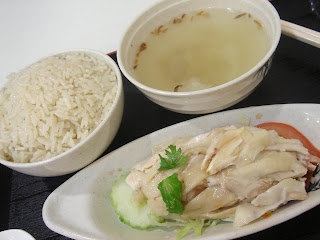 Mr Chicken Rice's Chicken Rice Set
Finally, the guy who used to cook the award-winning Chicken Rice at Chatterbox in the Mandarin Hotel has opened his own Chicken Rice restaurant at Downtown East (in the building where the cinema is). So though I had already eaten lunch, I gobbled down a Mr Chicken Rice set meal just so that I could say that I've been there and done that. Verdict - didn't understand the fuss. But well worth the money, less than 4 bucks for the whole thing.
Publié par Beau Lotus 涟 à 19:00