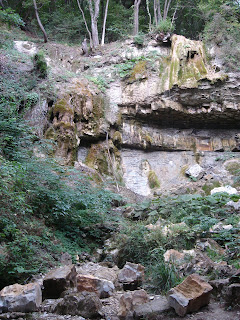 Cascate della Bucamante (w/o the water)

Hub was really encouraged by the fact that the Babies seem to hike well and suggested that we do another one last Sunday. This time round I chose the place. 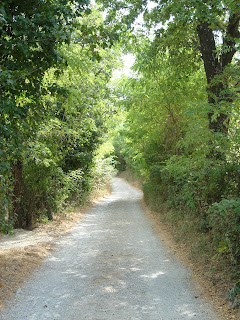 The entrance to the park
The Cascate della Bucamante is a waterfall on the Bucamante river near Maranello. You go on the Nuova Estense past Torre Maina towards Serramazzoni, turn right at 13km before Pavullo and you'll reach its parking after a pebbly drive up a narrow slope. The hike (or at least the trail we chose) is a short one though it can be a little steep at parts and if it has rained it would definitely be slippery. 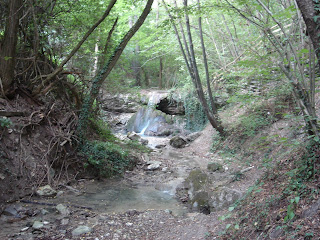 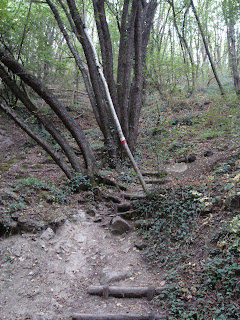 The trail
At the end of Summer there was of course no water at the waterfall, though there was water running in the stream. A few families laid towels on the ground along the way for a picnic, you shouldn't expect to do any suntanning though as little sun would manage to penetrate into the forest. 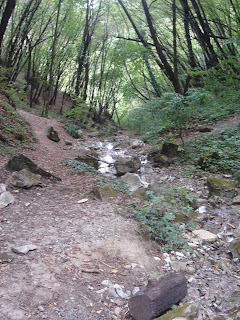 The beginning of the way back
A lovely walk, something you could do in just one morning or afternoon, probably best in Spring when the snow in the mountains would have melted or in Autumn after it would have rained a little.
Publié par Beau Lotus 涟 à 16:40

Looks like a fun hike.Women are always better planners than men :)

PS:I really think you should take up Nordic walking. It will help with the weightloss :) You'll burn 30-45% more calories than regular walking.Plus you in Europe, where its the latest craze and the poles are so much cheaper than elsewhere

Alamak, Nordic sticks cost money leh :-). If you look at the previous pics, we usually just pick up sticks along the way and use them. Somemore no need to find storage space at home.

But you're telling me that because it's working for you ah. But I can't do it alone. Very boring. I'm going to go to the gym because I have a friend going there. Plus after that can do a bit of sauna and go for lunch together :-).