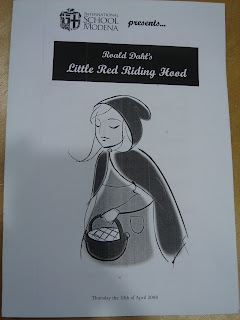 We all had an exciting evening. Eldest Son's a member of the school's Theatre Club and he had a little role in the school play - as a bat. In other words, a little bad guy role when the play in question had Little Red Riding Hood as its heroine. And a step towards our friend's future acting career. For those in the know, he has decided that maybe the easy way out when one's not academically-inclined would be to be a star. If only he knew.
Anyway, the play was to start at 7pm and all actors were expected to arrive half an hour earlier in order to get ready. I brought a book along to while away the time but never got to open it. I didn't realise that I knew so many people in the school and was to spend a good amount of time greeting friends and chatting away.
Even the Hub turned up. Surprise. But as he said it himself later on, thank God he did as almost every father did. Even the Ferrari ones. Not doing so would have been shameful.
From the look of things, almost every kid from Grade 1 onwards participated in some way or another in the play. If you were not acting you would be singing in the choir (you have the good guys choir on one side and the bad guys choir on the other) or dancing away (the Middle Years). So the ambiance was really quite warm and even electric, with proud and nervous parents watching their kids and vice versa. 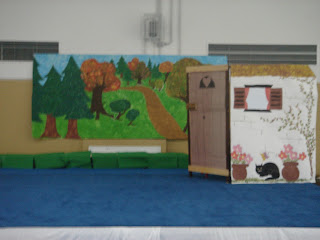 The stage
The play was in English, of course, since it's an International School. The diction's not always perfect (not aided by the acoustics) but considering that you have many non-English Mother Tongue children around it was quite a feat. Kudos to the Vice-Principal KB who's also Artistic Director and Theatre Club Teacher. She did a wonderful and amazing job. And a few mothers also contributed through making costumes and props, something I admire since I hate cutting anything with a pair of scissors and these ladies churned out quite a number of amazing stuff. No good play without good props and costumes as we all know.
The boy didn't forget his lines or lyrics and KB even told me that he has acting potential - if he could remain focused, of course. At one point all the bad guys put on red Ferrari caps. Ferrari = Bad guy. How's that? :-)
I started riminiscing about all the school plays that we had at school (an all-girls Methodist school) when I was a kid in Singapore. Each class used to produce at least a play or a dance performance each year in my school. And we would also have separate choir performances. Some of the plays were really good, especially if they had Indian girls acting in them e.g. Sheila, Naomi...Such a long time ago. How I've missed those days.
Talked to my sis. She said that my niece who's in Kindergarten is also attending Speech and Drama class.
After the play Hub took the kids to an Italian restaurant near the school for dinner - with at least 15 other kids and their parents. While I snip off to drive a mother and her son home as they had no car (nor bus at that time of the night). And thank God I did that as it bought me a good 30-40 minutes' reprieve from the noise. I must say that this was possible only in Italy. In France or in the UK, we would have been kicked out of the restaurant a long time ago. And you know what? Most of the dads stayed on a little longer at the end of the evening, leaving the wives to drive the kids home. Ahem.
Publié par Beau Lotus 涟 à 12:35