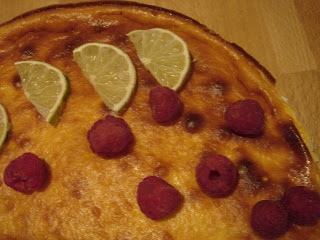 If you do not eat them the raspberries will rot.
Why did you buy so many of them?
Ngeh ngeh negh...At times the Hub can be a real nag. Like an old granny. Not that I've known any of mine, but they must all be like that.
So I stared hard at those berries and decided this afternoon that I'll make a Lime and Raspberry Cheesecake. I've decided to kill 2 birds with one stone and get rid of both the limes and raspberries in the fridge. As a matter of fact, make it 3 birds as I've also got a few tubs of Mascarpone and Philadelphia Cream Cheese (don't ask me why). Not to forget digestive biscuits and ginger snaps. Ok, many birds.
I don't eat cheesecake. But the Hub loves it. Kind of difficult cooking something I don't like and do not usually eat. But then I've often done that and with reasonable success. 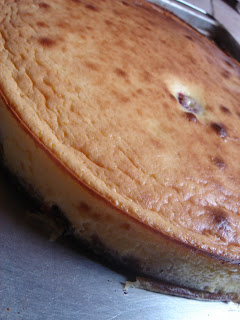 Lime and Raspberry Cheesecake
300g Ginger Snaps and Digestive Biscuits
90g Butter
20g Brown Sugar
Raspberries
Lime
4 Eggs (whites and yolks separated)
A pinch of Salt
150g Icing or Fine Sugar
250ml Philadelphia Cream Cheese
250ml Mascarpone
Crush the biscuits and mix with the butter and brown sugar to make a cake base using a paper-lined and buttered springform mould. Best to leave in the fridge for a few hours before using it.
Beat egg yolks with 100g of the sugar till creamy. Add in the salt, cream cheese, mascarpone and lime zests and beat again.
In a separate bowl beat the egg whites (and eventually a little bit of lime juice) till stiff, adding in 50g of sugar gradually.
Fold it gently into the cream mixture.
Arrange the raspberries on the pie crust and pour the mixture over them.
Bake in an oven pre-heated at 160ºC for 35 minutes.
Let the cheesecake cool for 20 minutes before putting it in the fridge for a few hours. Serve cold.
Many bake their cheesecakes using a lower temperature, longer time and most of all in a Bain Marie (water bath) - to avoid cracking on the surface of the cake. I'm too lazy for that and as you can see, there were no cracks on my cheesecake. 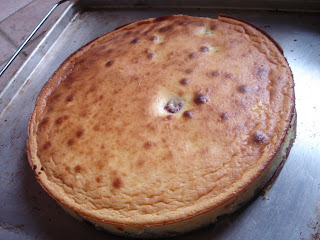 Hub gave the thumbs up for it which was just as well as he would have to eat it with the kids. I don't know why but I just don't dig cheesecakes.
Publié par Beau Lotus 涟 à 17:18

How many kilos of raspberries did you buy? I thought if buy too many cannot finish, can easily put them in the blender, mix with yogurt then you have raspberry yogurt or make ice blended raspberry juice ? :)

Oh, you don't like cheesecakes? We love them in this family. But I only eat the ones like yours. I can't stand those gelatine non-bake stuff. That's not real cheesecake!

One Wheel, true true, I could have made raspberry yoghurt or juice and indeed I usually do that. But I haven't blogged about cheesecake so I thought that I should make one now so that I could blog about it :-).

And D, no I don't like cheesecake though I love cream cheese. Funny, isn't it? And like you, I'm not too fond of gelatine stuff though I love jelly and agar agar...

Yes yes, jelly and agar agar are fine as they are supposed to have that texture, but not cheesecake. Cheesecakes are meant to be dense. Well, people created gelatine cheesecakes probably to save on the cheese?