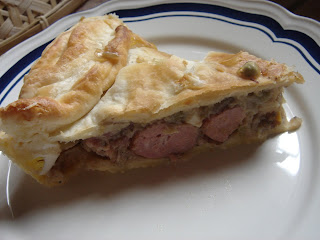 Chicken Sausage and Potato Pie
Another car was broken into this afternoon in the school's carpark. A dad had his notebook stolen more or less before his eyes. A mom saw a car with 2 men inside driving out of the car park. It was parked next to the robbed car (they broke the car window, of course).
After the first break-in a few months back, the Principal mobilised her staff, taking turns to guard the carpark in the morning and afternoon, rain, snow or shine. Sigh, they have more important things to do than guard carparks, but those lawless thiefs do not leave one with any choice. This morning I had left my bag in the car thinking that it would be safe, and then in the afternoon this had to happen. Definitely a warning not to be ignored.
And it could have been me too. But I arrived just after it happened, having brought the babies to the polyclinic for their injections.
That aside, I have just finished Sophie Kinsella's The Undomestic Goddess. Gravy was mentioned occasionally in the book. Gravy was what I couldn't stop thinking about today.
I remembered that I had drippings from Sunday's Roast Chicken in the fridge. I have flour. I have stock. I have white wine. I have cream. I will have gravy.
But of course it would be unacceptable (to the Hub) to have only gravy for dinner. So I grilled bacon and chicken sausages with some herbs, boiled potatoes and eggs, sauteed onions and garlic and rolled out puff pastry. Assembled everything and included some carrots and peas, poured the gravy over them and then baked the Chicken Sausage and Potato Pie in the oven (180ºC) for 25 minutes.
Served it hot with a mixed salad. 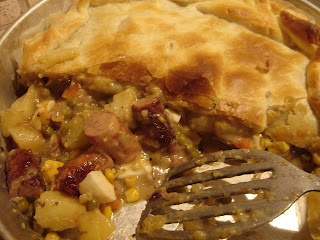 And I did lick the leftover gravy clean off the sauce pan.
Publié par Beau Lotus 涟 à 20:00

That looks heavenly, my kind of pie. I love Sophie! She's brilliant! Have you read all of her books? She reminds me of me - shopaholic. Hehehe! Be careful on the school front.

I've read 3 of her books so far and will probably do an exchange with my sis in S'pore this Summer (via Eldest Son). I can certainly identify with the shopaholic as I do so love shops and shopping, though luckily I never spend more than what I can afford to.

Are you excited about your coming trip? All set?

Hey S.! That´s a nice pie! However, I´m so busy to cook these days that I´ve only got time over the weekend. Having said that, its normally soups and stuff, since I´ve been quite "heaty".... hope my eyes recover. I´ve got eye lid infection.... any home-cooked remedies to recommend?

Ah Pris, I'm one of the most unhealthy people around, so I wouldn't know! Just take care, ok?

Meanwhile, it's great to be working, isn't it? Only jobless people like myself have time to cook.

Excited? Ok lah. Frankly I hate to fly so far nowadays. And it's also to places I've been before, so not so much excitement. Ahh, but if I was going to Japan, that would be a different matter. ;)

I've never been to Japan and would love to. Ramen, Udon, Tempura, Kimonos and Mangas for me.