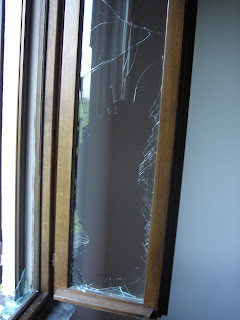 Another broken window
We were all set for our trip to Umbria on Friday morning. For once we were going to set out early. I had prepared the luggage, lowered the heating, closed all the wooden shutters, prepared drinks, fruit and sandwiches for the journey etc etc.
Then the Hub said that I shouldn't have packed boots for Baby Girl as we were no longer in winter. I took them out of the luggage (already loaded in the car) and returned them to the house. I asked him if I could lock up the house and he said yes.
I happily banged the door shut and started to double lock it. But my key turned emptily in its lock. A sure sign that there was a key already in the lock - on the other side of the door.
I was an idiot not to have noticed the key.
He was an even greater idiot for having left the key in the lock on the inside when the whole family was already out of the house.
Difficult to find a locksmith on a public holiday.
Even more difficult when nobody knew how to call for one.
He borrowed a ladder and a hammer from the concierge, climbed up to a 2nd floor window (very very high) and started to break the glass. Didn't think of putting on gloves. Cut 2 fingers deeply.
Glass AND blood every where.
I do not know if this was some sign as the 1st and last time it happened (but without loss of blood), it was on Baby Boy's Birthday. This time round it was on the eve of the Hub's 42nd.
Drove him to the A&E (new hospital in Modena, always did say we should visit it some day) and spent a good 3 hours there. Probably emptied the vending machine while waiting.
Had to drive 3.5 hours to Perugia with a nervous front passenger. It was fortunate that I rather enjoy driving on highways though I miss flying at 180 km/h on the Autobahn in Germany. But I am not fond of passing by Florence as its highways have loads of bends. And I dislike it even more when I enter a strange new city and the Hub spent his time on the phone instead of helping me keep a lookout for our hotel.
Had also spent the last few hours fuming about the amount of broken glass and curdled blood that I would have to clean up on our return. What holiday?
Publié par Beau Lotus 涟 à 21:28

Oh gosh! Bummer! Hope you have a good holiday to make up for it.

When I first read the title, I thought perhaps you'd been burglarised. Enjoy your vacation & worry about the mess only when you return.

hey, oh dear. I thought that the key went missing again when I saw the title and the picture of the broken window. Agree with petite, to enjoy yr holiday to the best that you can and clear up the stuff later.

Ay! Lotus, Lotus... did you kiss your hubby's hand to make it all better afterwards?

Like the rest, hope you have a good holiday too.

oh man. What an 'exciting' day it was. Hope things are settled now?

Hi ladies and thank you very much for those words of kindness. I now have a phobia about the door and will not leave my key in the lock longer than is necessary for me to open or close it.

Kiss his hand, J? Sigh, now I know why H keeps buying you jewellery, you're a sweetheart.