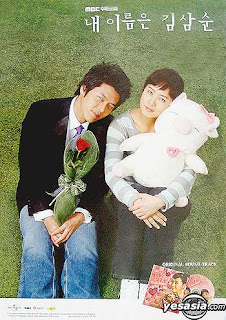 My Lovely Sam Soon
Do you love her?
I can't stop can't stop thinking of her.
Do you love her?
I miss her (when I am not with her).
Do you love her?
I am really very happy when I'm with her.
I was a little pissed off when he couldn't seem to say it out loud that he loved Sam Soon. Not even with his usual "er" which would go for a yes. And then of course this would be the scene that would stay in my mind the longest after I've finished watching the mini-series.
I asked myself, when was the last time I told the Hub that I love him? And vice versa.
Though of course in our daily actions we more or less prove that we do and that certainly is more important than hanging "I love you" on the tongue. N'est-ce pas?
So, for those in the know, I've been watching the 2005 Korean hit mini-series (16 episodes in less than 3 days - fed the kids Foie Gras on Toast and left them to their own devices) My Lovely Sam Soon. My SIL who lent it to me and my dear blogger friend EMWK sold it to me as being hilarious, but I spent half the time cringing over the scenes and didn't laugh that much. So now I have to re-watch some of them and catch up on the laughing.
I guess I do not share Sam Soon's very direct and frank attitude towards love (though I dig the fact that she's loud, straight forward and stands up for herself). But she is right of course. If you love him, you love him; if you don't you don't. Why should things be more complicated than that?
Because I wouldn't want to lose face. Not over a man. No way, man.
Anyway, I had to do my usual post-mortem when I finish watching anything, so I've been checking up a bit on the filming history, the actors etc. Also turning certain scenes around, re-writing some of them. That made returning to reality a little difficult but I'll be back.
I also wonder why watching Korean cuisine in the period drama Dae Jang Geum made me salivate but looking at modern Korean food in Coffee Prince 1 or My Lovely Sam Soon usually made me want to vomit. Though pleased to see that like the Chinese, they are into rice porridge and believe that we should consume it when we are ill or down. I love rice porridge, can eat it everyday. And especially with Marmite. Yummy... 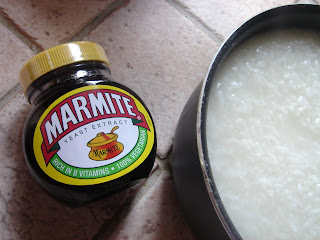 Finally, heh heh, I had to ask myself why though I married a European (and wouldn't exchange him for anyone else), I am often much more attracted to Asian men or men with a hint of Asian blood in them. Brad Pitt or George Clooney do not make me swoon, but most good looking Asian men do - and they can be Chinese, Japanese, Korean, Indian, Red Indian, Indonesian etc.
Maybe that's because I like men with dark smooth hairless skin. Though probably wouldn't want to live with one.
But you know that what you like and what you finally choose is not necessarily the same thing. Like what you studied at school and what you do in life may not be the same. Like what you envisaged cooking and how it turn out finally. C'est la vie.
Love like you've never been hurt before
Dance like no one is looking
Love like you've never been hurt before
Work like you don't need the money
Sing like no one is listening
Live like today is the last day
(From My Lovely Sam Soon)
Publié par Beau Lotus 涟 à 10:04