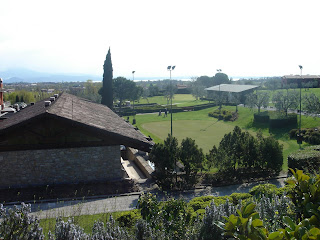 Saturday saw us dashing, yes dashing, to the Garda Golf Club near the Garda Lake. The Hub was to participate in his first ever Golf Tournament and had set out an hour later than originally planned. I will of course take no responsibility for this. He could only blame himself for not taking my warning that an hour wouldn't be enough to prepare 3 children to go anywhere least of all at 7 on a Saturday morning. But it was sweet of him to want us all to come along with him.
Of course I would not want to hang around the Golf Club with 3 children watching big men hitting balls all day long. Though the Hub needn't sell the Gardaland ticket to the kids and leave it to me to bring them there - for the second time in less than 3 weeks. Aarrgh. 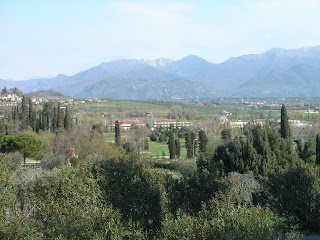 View from the Golf Club
It was a beautiful Golf Club. Rolling greens (probably one of the most beautiful in Italy) and all with a view of the Garda Lake. The Garda Lake area is really chic and lovely, with beautiful houses everywhere. Ah, but it was windy. 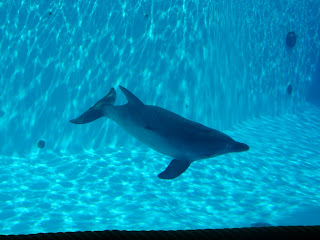 Dolphin at Gardaland
So we finished watching the shows we didn't get to watch the last time and did a few rides. I went on a few roller coasters on my own while leaving the kids with Candy Floss, fries etc to while away the time and had also to bribe them with nearly a hundred Euros' worth of junk from the shops. Yes, I had rejoiced too quickly on my 1st visit there. They wouldn't take "Prezzemolo is ugly" for an excuse not to get them anything this time round. 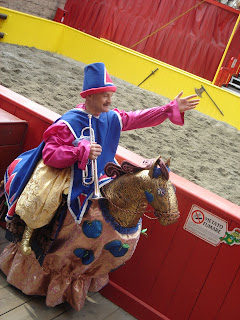 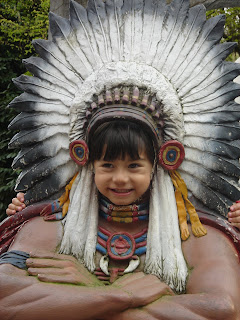 We returned to the Golf Club in time for the dinner party. Yeap, it was a pain visiting Gardaland in a cocktail dress. Did I not mention that earlier?
It was a private Golf Tournament and was to follow with a private dinner (speeches, prize-giving, Buffet to start, followed by Asparagus Risotto and dessert served at the table) where Madame had to speak Italian all evening. Tongue and brain became numb by the end of it.
Hub and his team mate came in last, but got away with a really good magnum bottle of wine. Plus a bad back. He actually couldn't go to work today and had to work from home! How about that?
Publié par Beau Lotus 涟 à 11:35

Oh how cute is little A.