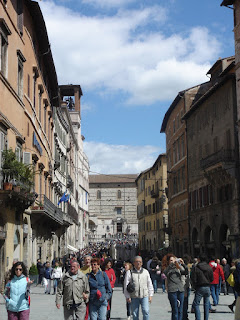 When we were in Tuscany 2 years ago I noticed on the map that landlocked Umbria was next to it and that the guide book talked of truffles, funghi porcini and roast meats, olive oil and good wines. So it was a matter of time before we found ourselves there though of course it was a little spoilt by the blood and broken glass incident that preceded it.
Perugia is about 3.5 hours away from where we live. It intrigued me that those lovely cypress trees could be found everywhere in Tuscany, Verona and of course in Umbria but not in Emilia Romagna. That you leave my region and quite quickly Italy would look quite lovely again.
Perugia was lovely. Capital city of Umbria, home to one of Europe's most important Jazz Festivals (held in July since 1973), the Baci (chocolate-coated hazelnuts) and the Università per Stranieri (University for Foreigners with courses for language, literature, art etc). It is also the city that produced Perugino (Raphael's teacher), the Flagellants (folks who whipped themselves for religious penance) and quite a number of battles and blood in the past. But one had better be quite good at starting a car on a slope as the city is one of Italy's best preserved medieval hill towns. Hub complained that I was killing the car's engine each time we went uphill or downhill because I did not know how to control my pedals.
To go up to the medieval centre, you can climb, take the escalator or pay for a ride on the mini-metro. It was really very pretty with great views of the surrounding countryside. 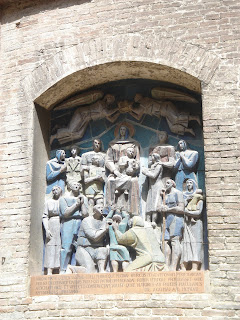 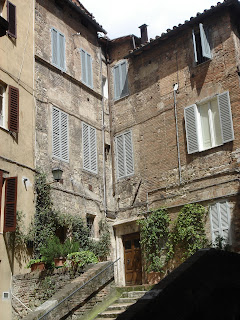 Perugia
The next day, we visited Deruta known for its (expensive) pottery and Assisi - home of St Francis. The latter, perched halfway up Mount Subasio, was breathtaking. Definitely worth a visit. We also visited the Basilica di Santa Maria degli Angeli near the train station - a huge church built around the first Franciscan monastery. 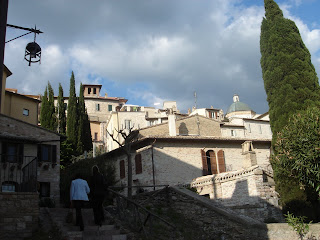 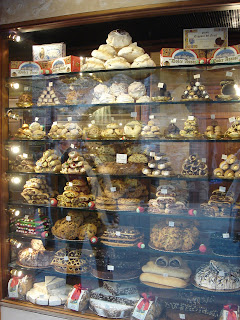 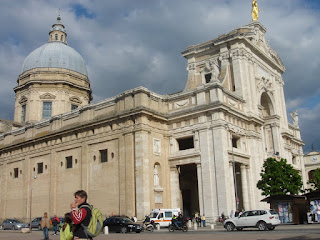 Basilica di S.M
On our last day, we made a trip to Passignano on the Lago di Trasimeno - Italy's 4th largest lake. That too was really worth a visit, with lovely old houses and buildings leading up to the ruins of an old castle and a beautiful view of the lake including its only inhabited island Isola Maggiore. 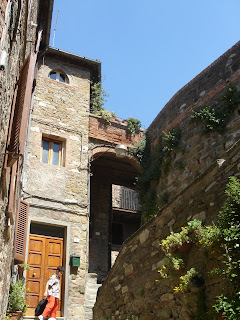 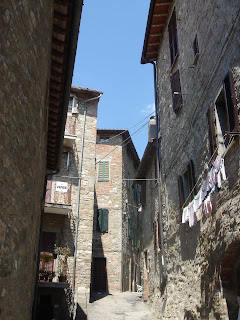 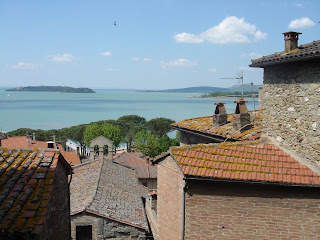 View of the Lago from ruins of castle at Passignano
Back to Modena though we were caught in a nasty traffic jam but all in all Umbria is definitely worth a visit.
Publié par Beau Lotus 涟 à 21:29