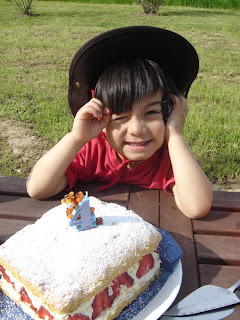 Baby Boy and the Fraisier

Children in this foyer have at least 2 cakes for their birthday - one to share with the classmates and another with the family. And usually there'll be a 3rd one - when they have their Birthday party. How over-indulgent can some parents be, right?
Baby Boy had his party a month after his birthday in the hope that the weather would be good enough for it to be held out in the garden. April this year had thus far not been very warm, so when we had sunshine and a little wind yesterday, we felt really thankful. 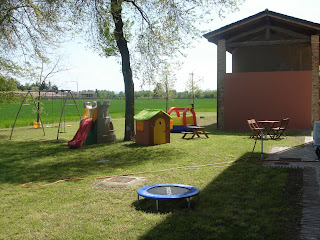 The garden all set for the party
7 kids were to join the party though in the end there were more than that running around as their older or younger siblings all came along. The parents hung around to socialise and help keep an eye on their children and we moved the garden furniture around from time to time trying to catch the sun as it changed position. 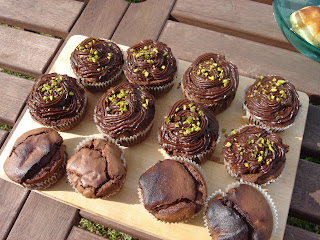 Chocolate Muffins (surprising popular with the kids, even the burnt ones)
I made 2 cakes for the party - Fraisier and Chocolate Muffins. And the former was a mistake as I had made it with a very heavy butter cream instead of my usual yummy whipped cream and we nearly had a heart attack after the 1st bite. My cleaning lady Irina loved it though and brought what remained of it back with her today. 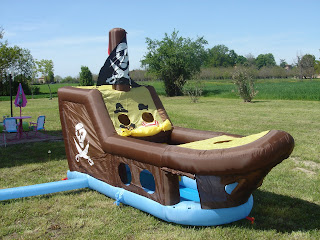 Theme of Party was "Pirate" (all down to the goody bags)
Towards the end of the party, the older brother of one of our little guests suffered a fit - probably after receiving a kick on the back of the neck and I nearly died of shock - and helplessness. Thank God an Italian mother was at hand to call the ambulance (and cancel it later on when the kid seemed OK - imagine me trying to say anything in my pathetic Italian and in any case I wouldn't know what number to dial) and the boy's mother was around to comfort him and take charge. Whew!
I was about to say that I wouldn't have any Birthday parties to deal with till October when I remember that I had invited almost 30 adults and children to Hub's 42nd in a fortnight. I am such a masochist at times.
Publié par Beau Lotus 涟 à 16:05

Lovely garden you've got there. We still have a long way to go to get ours set up properly. Have to wait for the wall to be done first.

The pirate ship looked better than it really was. And it needed running electricity to keep it up - bad for the pocket and the environment.

Petite Fleur, what garden? Just a flat expanse of land that needs to be mowed every 2-3 weeks. And home to loads of horrible insect life and a few running tractors in the field next door. I wouldn't mind a nice wall like the one you're building, truth be told.

But I'm going to work on having some plants and potted flowers this year - if I remember to water them. Plus it can be pretty discouraging as my last few pots of flowers were all covered with larvae and it was really disgusting. Boo hoo hoo...