Who takes out the Rubbish? 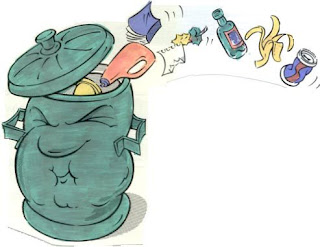 HERA charges us a fortune for rubbish removal. Except that there are no containers anywhere near my house and we have to transport the smelly stuff ourselves elsewhere. I've actually emailed them a few months ago about that and was told that their system was down and could I please come down to the office with my query? Am I mad? Would I want to queue up for hours in an Italian office and risk having them play ping pong with me?
Speaking of ping pong, so the Hub and I do that with the rubbish. Whose turn is it to take it out? Who does it more often? As we've gotten into the habit of recycling our rubbish after Stuttgart, we do have a number of bins at home. Taking out the rubbish could thus be a time-consuming enterprise especially when we finally arrive at the dump. You take the pain to sort out the plastic from everything else at home and then you have to put it into the container one by one at the dump. Aarrgh.
The Hub thinks, for some (untrue) reason, that he brings out the rubbish more than I do. He's very proud of the fact that he often thinks of taking out the rubbish when he goes to the golf (they've a few containers there). For the few times when we had rubbish hanging around and he knew that I've been near the golf on the day in question, he would lecture me about the simplicity blah blah of taking the rubbish along with me when I go to the golf...
Yesterday afternoon, he prepared the rubbish on his way to the golf - and left without it. I called him on the phone,
"You've left the rubbish at home."
"So? I'm now at the golf."
"I know that you're at the golf. Did you not always tell me that we have to take the rubbish out when we go to the golf?"
"Don't bother me, I'm now at the golf." And he hung up on me.
God, was I seething. If he had said that he was sorry he had forgotten to take out the rubbish, I would have found it in me to forgive him. But don't-bother-me-I'm-now-at-the golf was not the kind of answer I could live with.
So I picked up the rubbish, loaded it in my car and drove to the golf. Found his car in the parking (filled with the most expensive cars) and left the rubbish bags next to it.
He came home a few hours later lamenting that I was so childish. I have no problems with that, like I've said I do know how to take criticism. Just don't expect me to do anything about it.
Publié par Beau Lotus 涟 à 11:23

I couldn't helping laughing out loud. They must learn! We women are not to be bullied.

Oh this post was hilarious! I felt so happy that I'm not the only one who reacts badly to being hung up on. And it gives me some encouragement to know that even the best of men (I's assuming your Hub is a great guy or you wouldn't have married him) can be like that sometimes.

He tried to attribute it to THAT time of the month, but he should have known better.

Well, if he's going to use the hormone card, then all the more he should lie low and keep out of trouble!