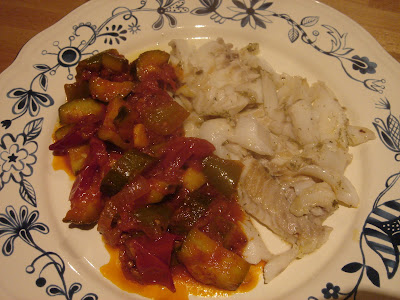 Ratatouille
Eldest Son doesn't eat zucchini except when it's cooked in a Ratatouille. Funny, isn't it? Now of course it is famous after Disney made a cartoon of it, but I serve mine the traditional Southern French way, nothing fancy like in the film. Cod was on offer at Esselunga the other day so I pan-grilled it in olive oil and herbs (e.g. dill, basilic, aniseed, thym, parsley...) and served it with some ratatouille.
Ratatouille :
Olive Oil
Garlic (lots of it)
Onion
Zucchini
Aubergine
Red Peppers
Tomatoes
Tomato Sauce or Purée
Herbes de Provence or just Basilic and Thym
Salt and Pepper
Basically one browns the diced garlic and sliced onion in a good amount of olive oil till fragrant before adding in the peppers, aubergine, tomatoes and zucchini in this order to have them browned. The size of the vegetables is as you wish, some like it in rounds, some in chunks and yet others in cubes.
Then add in the herbs and adjust the olive oil if necessary. I like to add in some tomato sauce or purée to obtain a wetter and thicker sauce but that only once the vegetables have been browned. Add salt and pepper to taste.
The cuisson of the vegetables is rather personal for a ratatouille though in general they, for once, taste better rather well-cooked. I usually cover the pot and cook them for about 20 to 35 minutes on a low fire. The ratatouille can be eaten hot or cold, in fact it goes rather well served cold the next day on a hot baguette.
Publié par Beau Lotus 涟 à 18:53

I was actually mad enough to make ratatouille the way Remy makes it in the movie. While it does look pretty, ratatouille done the traditional way is so much better in terms of taste.

I love this dish not only for its simplicity, but for the gastronomically enticing aroma of herbs, olive oil and the rest of its ingredients; deliciously gathered together as if saying whoa, good eats and that's me ratatouille.

Though J, I wouldn't be surprised that you would be tempted by that sexier version of ratatouille knowing your eye for beauty and all. LOL