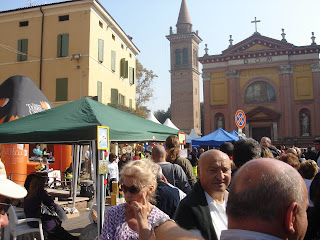 At the time when we were fantasizing about our move to Italy, we imagined ourselves hanging out with the Italians, speaking Italian, eating Italian and doing mama mia stuff - in other words being totally immersed in our new country and fully integrated blah blah.
A year later, we shudder at the thought of eating more pasta or pizza, my Italian's still half-baked because I spend most of my time speaking English or French, we could count the Italians we know with our fingers and we don't seem to do many mama mia stuff - unless you count not stopping at zebra crossings when you see pedestrians trying to cross them. Or me having a fried Gnocco at the bar this morning while buying a lottery ticket.
In short, we are very expat. And since from the look of things we'll not be leaving Italy for a while, I thought we'd better try to do more local stuff from now on...After all we did use to attend the German festas when we were in Stuttgart.
So, when I saw that our neighbouring Castelnuovo-Rangone was having some festa over the weekend, I told the Hub that we should forget the Golf Club and join in for once. Soak in the local ambiance etc.
The programme didn't look too bad e.g. improvised Comic theatre with a group known as "Les Gramelot", Jazz Concert "Piero Odorici Quartet", Gnocco and Tigelle in the street on Saturday...But the Hub said that 22h30 was a bit late for a concert and suggested that we stayed in. 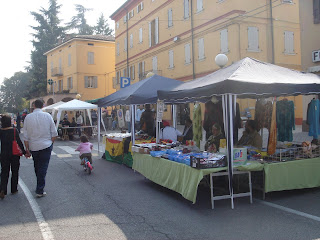 A few stalls
On Sunday, I suggested that we join in the charity assembly where thay had some dog show followed by a Big Charity Lunch offering Grilled Argentinian Pork etc for 5 euros a portion. When we arrived, there were only a few stalls selling a few items from Ghana and some Arab country - and the queue for the pork was very long. We queued up for 15 minutes and seeing that the queue really wasn't moving, decided to give up and go to McDonalds for lunch. 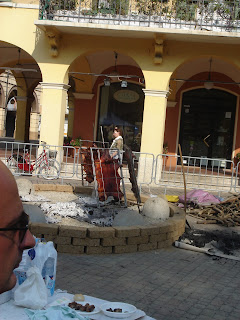 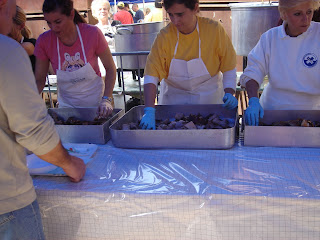 Pork distrbution
I guess they really need to work a bit on their street stalls. We were used to the really amazing installations back in Stuttgart where almost every weekend you'll find something going on. So back to the Golf Club for the moment until something more interesting crops up. 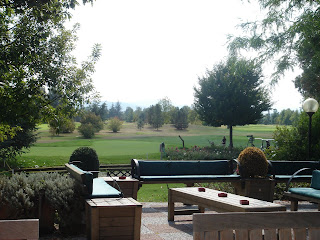