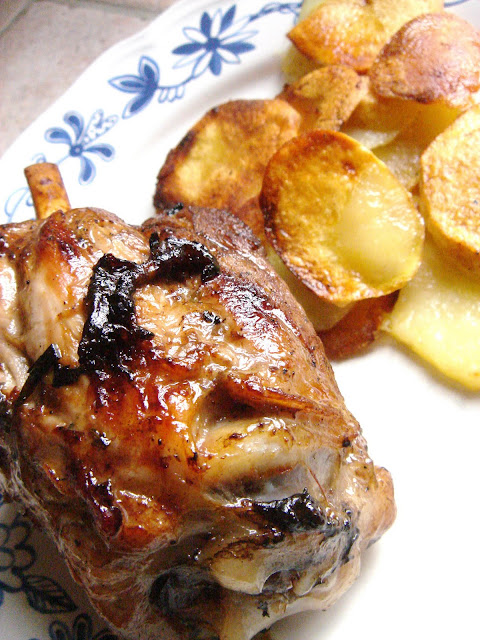 One of our favourite main courses when we eat in a typical restaurant here in Modena is the Stinco di Maiale al Forno or Oven-baked Pork Shank. When I saw them selling fresh pork legs at the Coop the other day I knew that I just had to make this dish myself.

I've given some thought to how I would roast the meat without drying it out and decided to first cook it slowly in my heavy Le Creuset pot before roasting it in a hot oven.

I had to eat dinner alone with the Babies, so I re-heated some leftover shank and served it on rice vermicelli which was just yummy. My appetite was only slightly affected by the sight of a frog staring at a small snake just outside my door as I went out to collect the children's PE shirts from the laundry line. We really do have everything here in this house. It's disgusting. I can't believe we have snakes here too!

Marinate the pork shanks overnight with some pepper, olive oil, garlic, fresh herbs and white wine. But do not salt it or the juices will drain out of the meat. 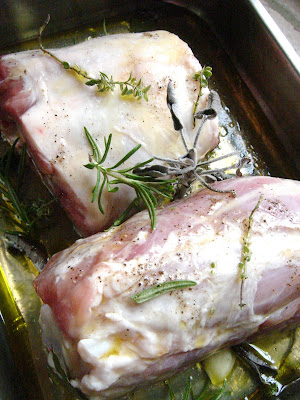 The next day, heat up a bit of olive oil in a heavy-bottomed pot and brown the marinated meat on all sides. Pour the marinade into the pot together with the herbs, celery and carrots, cover it and lower the heat. Simmer the shanks for an hour. Add more wine during the cooking if necessary. I poured in a bit of dry red wine. 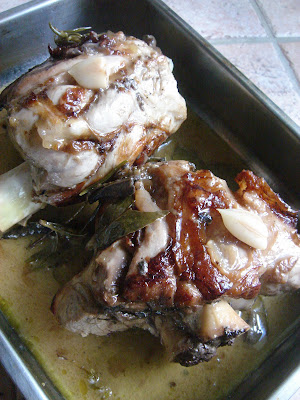 After an hour in the cocotte

In the meantime heat the oven to 200°C and prepare the sides to go with the meat. Some mashed, roast or pan-fried potatoes would go nicely with it. 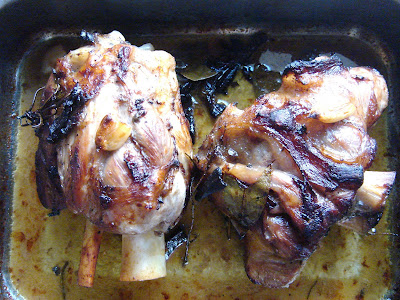 After 30 minutes in the oven

Transfer the pork shanks to an oven-proof dish, salt and roast them on each side for 30 minutes (1 hour total), pouring the marinade over them from time to time to prevent the meat from drying out. Serve the pork shanks with the potatoes and the roasting juices. 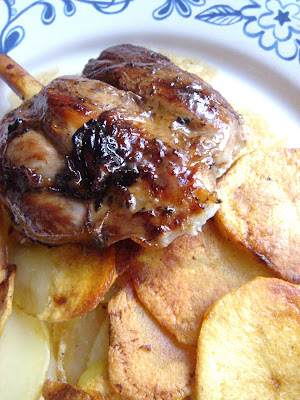 Wow, so your men are avid and very good golfers? Puts me to shame. Although I golf but I am the perpetual beginner.... Haven't touched the clubs in a long long time. I am not q big fan of pork shank but I like your approach towards roasting. It will come in handy one day for me :) thanks!

My men are still bad but talented golfers because they are only beginners. They still haven't earned their handicap yet, so they are trying hard.

I am pathetic at golf, anything to do with balls and it'll not be my thing.

I wouldn't eat pork shanks all the time, but once in a while they are very satisfying.

The Antiques Diva™ a dit…