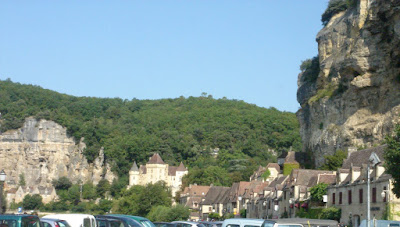 La Roque-Gageac
Our first long trip together when we were dating was to the Dordogne and that was more than a decade ago, of course. When we decided to visit SIL this Summer, Hub said that we could also visit the Dordogne, though this time more in the Périgord Noir - land of the foie gras, black truffle, walnut, chestnut, cèpe and Domme rouge (recently revived). 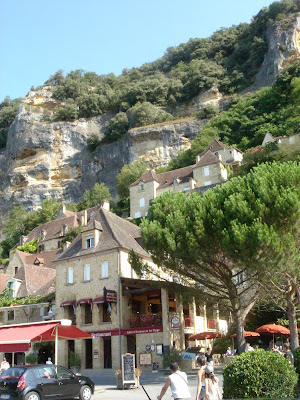 Our first stop was at La Roque-Gageac where our accommodation Hotel le Périgord was. This medieval village is classed one of the most beautiful in France and so it is, squeezed between high cliffs and the Dordogne river. 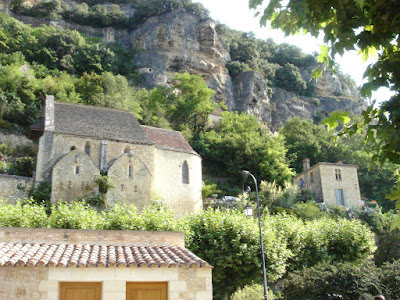 The church and the Townhall
It boasts of a series of pretty riverside houses, fortified caves set in the cliffs above, a small tropical garden, the lovely Tarde Family manoir, and traces of the time (during the 100 Years War) when the Bishops of Sarlat used to stay in the village. It is also possible that the caves were occupied since prehistoric times due to the discovery of flint tools in them. 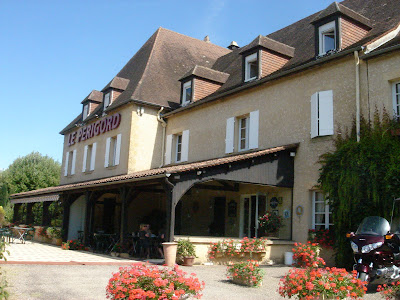 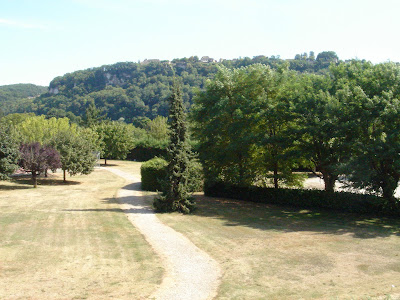 View of Domme up there 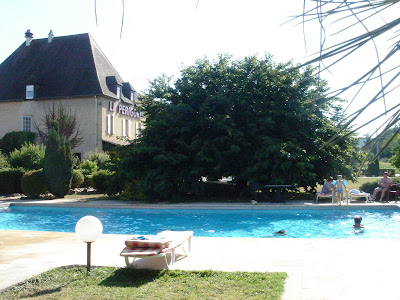 The pool
The hotel has 40 rooms, extensive grounds, a small pool and a rather chic restaurant. The owner is Italian, was born in Switzerland, has lived 10 years in Germany...and she was very nice and soft-spoken - but business being business in this touristic region, watch your bill carefully when you leave, I almost didn't notice that an extra 60 euros had been put in for breakfast that we didn't consume and a few more euros here and there for taxes and tea (?) that shouldn't be charged. And I wouldn't have noticed that (I rarely check my bills) if she wasn't trying to get more money out of me by wanting to look over the bill after I've already paid up. Thanks to that, actually, I woke up and saw that we've been charged for things that shouldn't be included in the bill. Still, I lost about 10 euros because we were in a hurry to leave and I've skipped a few extra items in my haste. 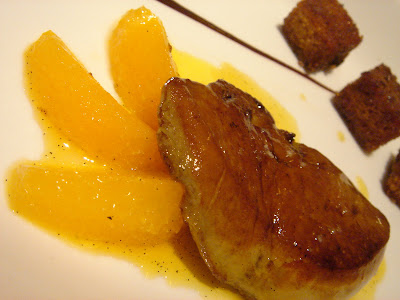 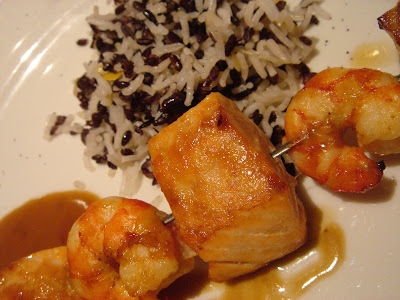 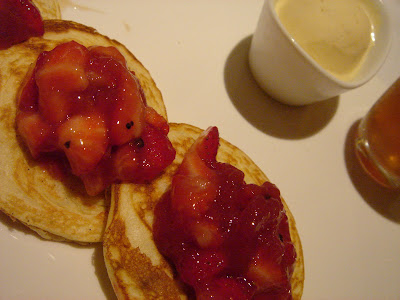 Strawberry Pancakes (all from the hotel's restaurant)
Having said that, the hotel was well-situated in the region (both for visits and for activities) and we had a lovely view of the village of Domme from our room. The food in the restaurant was also very good (if a little pricey) and we had access to another very good restaurant just a few hundred metres down the same road. In the latter, the children's menu included a drink, a starter, duck confit or steak and a dessert for 12 euros - a good value. The kids all love duck confit (and foie gras) so we were really in the right region. 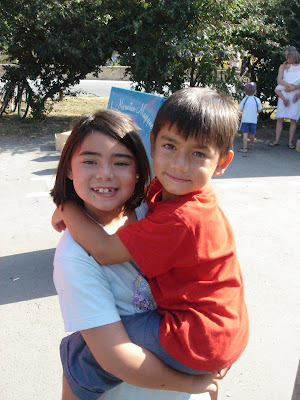 I see !!, Your writting could change the world that you want. Express your thoughts!!. Politics , Business , Entertainment , Sports & Games , Life & Events ,and Health what else?. Meet your like minded here. The top social gathering in one place all the top notches meet here. It is not about win the race, participation is all matters. We proud inviting you to the the internet's best Social community. www.jeejix.com .

I completely agree with you. I really like this article. It contains a lot of useful information. I can set up my new idea from this post. It gives in depth information. Thanks for this valuable information for all. And of course nice review about the application.
vakantiehuis dordogne