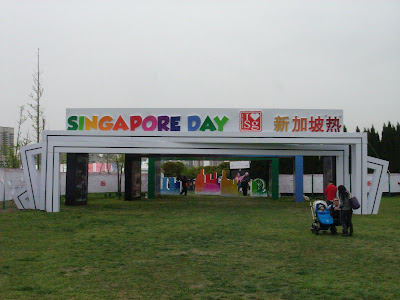 Singapore Day Shanghai 2011
For once in my life, I actually had some luck with timing. Who would have imagined that I would move to Shanghai the year Singapore decided to organise Singapore Day in the same city? And the week before the government even threw in a buffet dinner at the Westin for all Singaporeans living in Shanghai?
Bad tongues would wag about this being Election Year. But Singaporeans in Germany have always been invited to lunch annually in Berlin, I've attended Singapore Day in London in a year when there were no GEs and before I left Italy I was invited to dinner in Venice by OSU (Overseas Singaporean Unit) - it's all about connecting us with the country and with one another when we are away from it. And whatever it is, I love a free meal.
However, I didn't count on the Shanghai Grand Prix spoiling my plans a little. The qualifying race had to fall on the same day, of course. Aarrgh. 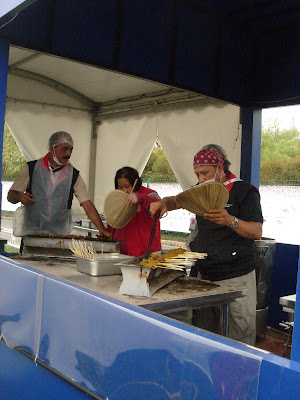 Very yummy satay
I originally planned to start out at Singapore Day and move on to the Grand Prix - but Hub reversed my plans and we ended up being too early at the latter and not having much to eat when we arrived at the former. In fact, almost every stall had sold out its food when we arrived at Century Park. We only managed to eat some satay and grilled seafood. 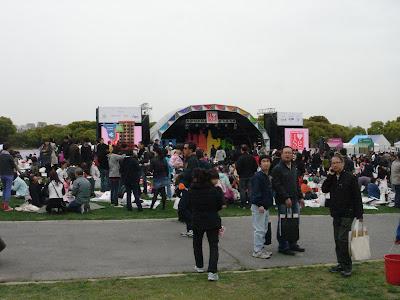 Nonetheless, I was happy to be part of Singapore Day Shanghai 2011, bumped into a few friends and just loved hearing people speak Singlish all around me. And the goodie bags were great, chilli tapioca chips (yum yum), chatek, 5 stones, picnic mat, T-shirt and lightweight umbrella...they have thought of everything!
Publié par Beau Lotus 涟 à 05:15

That's lovely. :) The men should take a lesson or two from us with regards making plans. ;P

That is great you enjoyed the Singapore Day, should have arrived first thing in the morning like what we did in London!!!
Bises
Wendy

Trust me, Wendy, I was thinking of you...