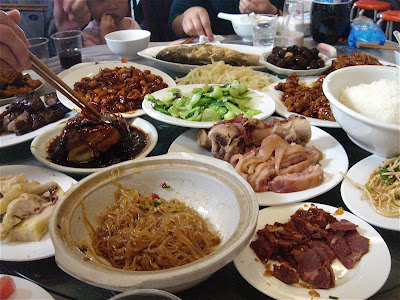 The lunch spread
As you know Hub travels a lot for his work and come weekends usually does not want to move any more. He likes to swim a few laps at the pool, play golf with the kids, cycle to our spa for an oil massage, play plant vs zombie on his iPad or just lie on the sofa watching movies.
When his company organised their annual Family Day on Sunday, his first reaction was to say that he didn't want to attend. I had to remind him that it wasn't meant for him - it was for the family; that as GM of his entity it wasn't really up to him not to go - on the contrary he had to be there to say a few encouraging words to those who work for him, praise their kids, thank their spouses...And of course I was curious to meet his colleagues. 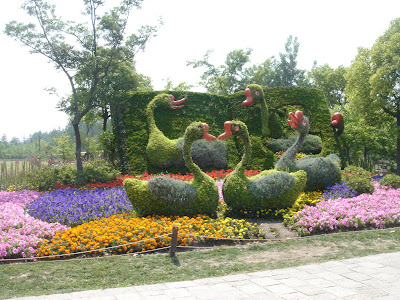 It was a really hot day and the park was a little far out - in the north of Pudong near some waterway. It was called Binjiang Forest Park and is the largest park in Shanghai. 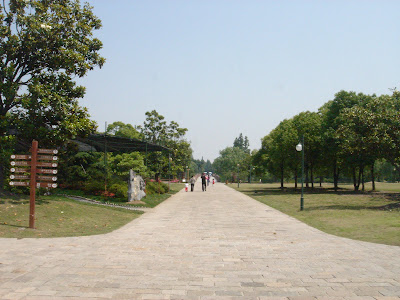 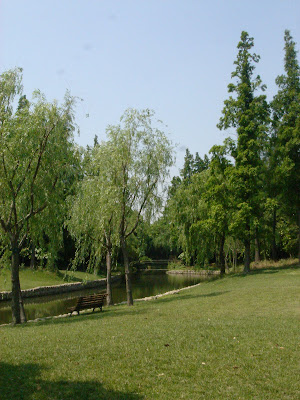 Binjiang Forest Park
Park's lovely and is well taken care of. There are different zones with sculpted plants, play areas, paddle boats, restaurants etc. About 160 staff and their families turned up and a company has been hired to entertain everyone by organising games, talent shows, group exercise etc. 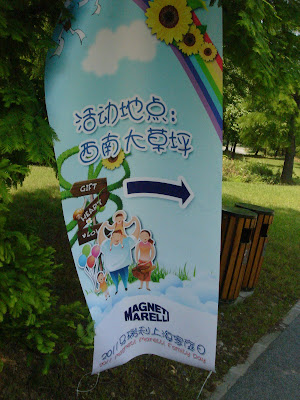 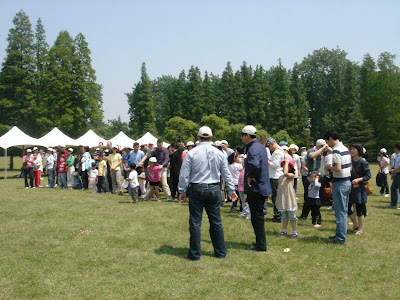 Gathering everyone before the stage (CEO in dark blue about to make speech)
Each family was given 2-3 backpacks with water, picnic mat and caps. I just realised that the children didn't receive any presents like I was told they would. Probably because we left earlier than everyone else - Hub couldn't wait to go. 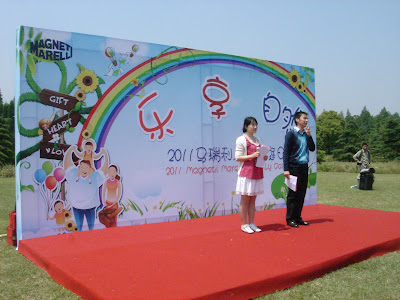 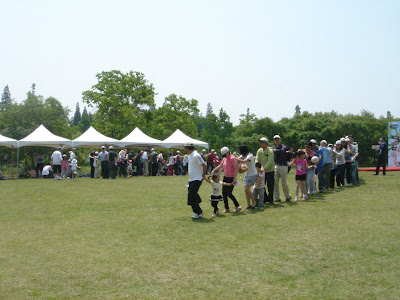 Exercise
Chinese kids and their families were quite game from the look of things, they took part in almost everything unlike us who just sat around complaining of the heat. A few kids went up to sing, play violin, recite poetry...they took part in quizzes and participated in father and child football matches. Hub joined in at the end because Baby Boy insisted (boy's quite good at football actually), but it was really only at the end. 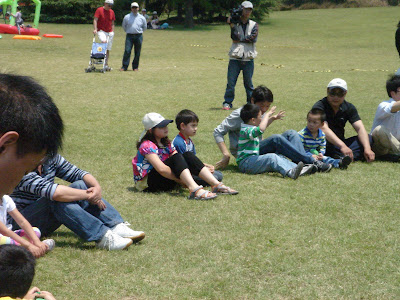 Babies took part in drop the kerchief game (sort of) 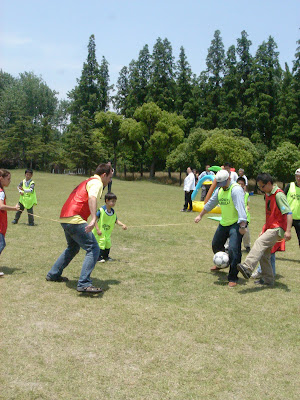 Father and child football match
At one end of the park you have a view of a body of water that looks like the sea - but probably is just part of a canal or river. Hub picked out the lucky draw prizes (we didn't win anything) and then we ate lunch in a restaurant that served local dishes. There was a lot of food - only Hub made the mistake of peeping into the kitchen on his way in and lost his appetite. The children only ate peanuts (literally) while I was the only one who ate like a pig. There were so many dishes it was impossible not to find something to eat. But the table next to us had mainly Italians, for example, and their food looked untouched. Could imagine them going home and cooking pasta. Hub came home and made ham and cheese toasts. 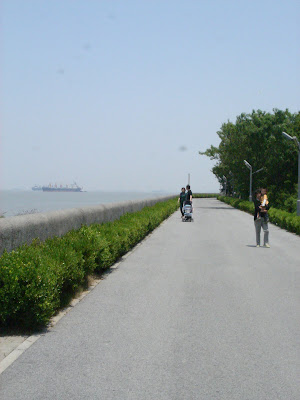 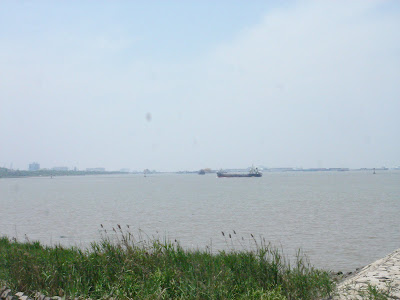 Colleague said that was Chongmin island but driver said not possible
We were arguing about whether I should make dinner (I was very full and didn't feel like cooking - but of course he was still hungry) when our Chinese neighbour turned up to invite us to his BBQ. Now, let me explain that it wasn't your usual family BBQ. The food was catered from some hotel on the Bund, the oysters were flown in from Brittany the day before (and they came with a few French guys to open them), the wines and champagne were French (e.g. Chateau Lynch Bages) and there was even a clown to entertain the children.
You almost never see any of the Chinese neighbours in our compound. They are usually very very rich and have an army of ayis and drivers - the only people you will usually meet in the day. But our neighbour has French friends and thought that it would be nice for us to meet them.
Found out that he owns an advertising agency as well as an art gallery among other businesses. A cool and interesting guy, simple and yet not so simple. He chimney smokes and loves good wine (e.g. he mentioned having Chateau Petrus in his cellar last evening), told us that our compound is owned by the Communist Party and not the Chinese State (apparently there is a difference between the 2), and wanted to invite us over for dinner every 2 weeks, and why not on weekends too.
He married a very young local girl 2 years ago and they have a little girl. Wife seems very nice and innocent - not at all like the sophisticated socialites you would think a man like him should have. I think I can probably get along quite well with her - only I feel so old and corrupt next to the girl.
It is unlike us not to return an invitation, but I feel a little nervous offering home-cooked fare and our now-cheap-in-comparison wines. Sigh...
Publié par Beau Lotus 涟 à 03:37

Seems like noveau rich Chinese wants to impress you & your French husband.

Read in some news recently that these rich Chinese just bring their expensive French wine & pour them into a punch bowl one after the other. The end result is just a mixture of different premium French wines.

And no, they do not drink it at all. Its just for show. Yes, I am shaking my head at the silly actions of these rich Chinese folks.

Hubby once went to a company thing in Beijing where the Chinese host brought a bottle of very, very expensive wine. What did he do? Served it diluted with 7-up. Hubby thought is was sacrilege.

Actually Chinese host was honest. He admitted that they usually buy the wine for the brand and cost (aka prestige), wouldn't care less how to best drink it, match it with the right food etc.