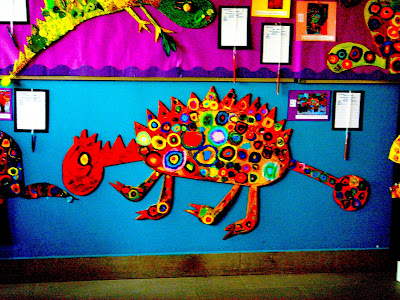 Art Auction @ YCIS Pudong (Babinou's Kandinsky-inspired piece)
We chose to put the Babies in YCIS Pudong because it is one of the smaller international schools in our part of Shanghai. And it puts quite a bit of emphasis on Chinese learning, in fact they have both an English and a Chinese teacher in each classroom. 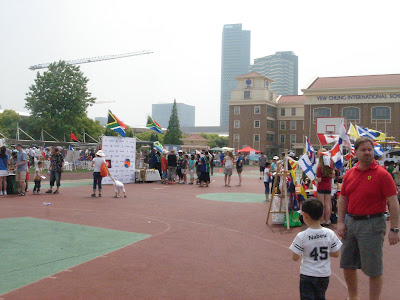 Global Child Day 2011
Today was Global Child Day in the school. Every nationality in the school had been encouraged to participate either with its own stand, or grouped with a few others to occupy one. This year's theme was "the way it used to be" so every stand would display toys and games that children used to play in the country in question and there would also be demonstrations and/or opportunities for visitors to try their hand at some of the games. 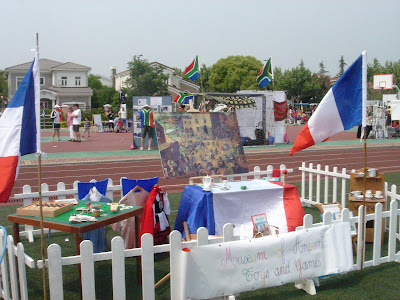 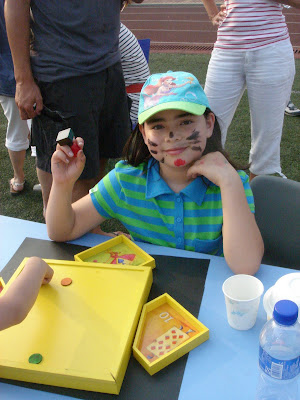 Babinette helping out at the French stand. Face drawn by the Brazilians.
There were also country-based costume parades, musical, dance and other performances - and of course a big buffet. No money changed hands on this day except for the art auction (proceeds were to go towards planting trees in Mongolia) and the right of entry consisted basically of bringing a dish to share with everyone. Since I have volunteered to do duty as well as cook for both France and Singapore, I have decided to keep things simple and made Apple Tartlets and Savoury Tartlets (for France) and Kaya Bread (for Singapore). 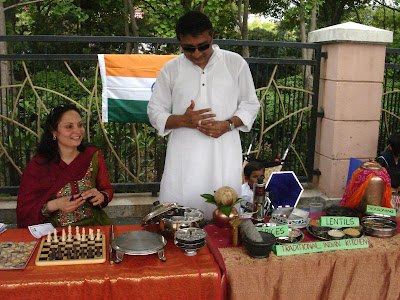 India : snakes & ladders had been invented by Indians 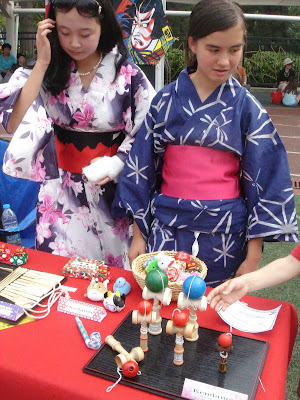 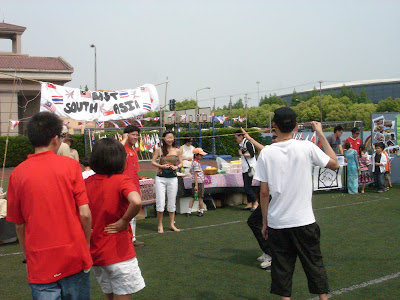 S.E. Asian stand : zero point, 5 stones, sepak takraw...most stands have loads of student volunteers working to consume CAS hours
Every child was given a passport when they entered the Fair. In it you'd find all the different countries participating in the Fair and some information about the country or a toy/game linked to it. Then there was a question on each page. The children were expected to answer the questions and visit all the stands to collect a stamp on each page, plus watch the different demonstrations as well as try out the various toys/games themselves (with the possibility of winning a prize). 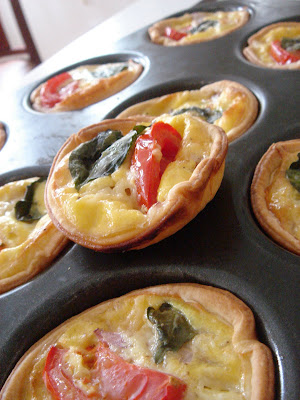 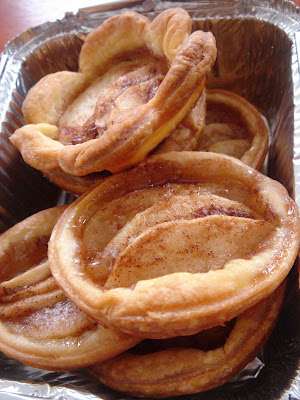 My apple tartlets and mini-quiches 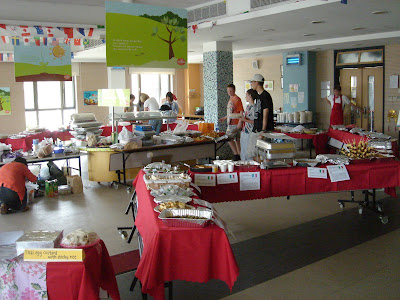 Part of the buffet spread
The buffet was BIG. So much food and such an interesting variety of dishes. It was held in the school canteen and basically we were only allowed into it once - unless there should still be food leftover for seconds. I was totally delighted to find kueh lapis among the offerings - thanks to the Indonesian delegation. The S.E. Asians had nasi lemak (sponsored by a restaurant here) and chicken curry, not to forget the very popular sticky rice with mango dessert. I suspect that it was somewhat easier cooking food in quantity here because most will have domestic help. 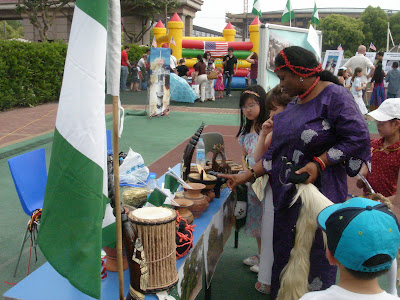 Nigeria : you can communicate on the drum 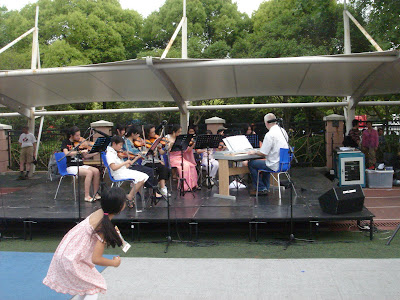 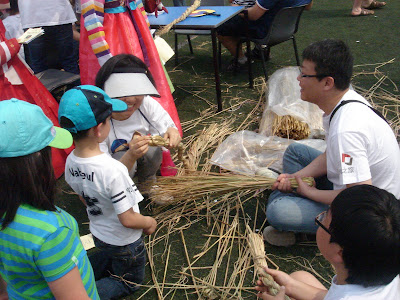 Korean stand : using rice stalks to make toys
Year 1 and 2s painted a few pieces of work for the art auction and Babinou wanted us to bid for his work (that he did with a few other kids). I won the auction and carried his masterpiece home at the end of the Fair - and it's now hanging on the wall next to his bed.
Publié par Beau Lotus 涟 à 16:46

You did not enrol your kids in the French school in Shanghai? If you do, would the French government provide subsidies for overseas enrolment?

Am quite surprised that the French sent their kids to an international school like you instead of the French school.

I thought the French are nationalistic like the Japanese and would only enrol their kids at their own national schools.

I liked the art piece too, it was supposedly Kandinsky-inspired. Hub nailed it to the wall over Babinou's bed and it looked really good there. Worth every cent I paid for it.

We thought about the French school. It would in any case be much cheaper than the other international schools, probably subsidised already. My MIL is quite upset that we didn't place the children there.

But we are seasoned expats. We move all the time and it's easier to find an international school than a French school in most places.

Many French and Japanese families actually place their children in international schools here. We love having so many other nationalities in the same school, it's an enriching experience for the children, will make them real citizens of the world.

Hi, my aunt in Germany used to write to you. She was reading your posting and suggested i get in touch with you since we are moving to Shanghai at the end of the year.

My family is Singaporean and we have 2 boys (7 and 9). We are thinking of sending them to Dulwich or YCIS. We visited both and are generally happy with it. Any feedback which could be of help to me? Drop me an email.

Hi Jacqueline I do not have your email.

Anyway both are good schools. YCIS focuses more on the Chinese though. And it has a good mix of nationalities, fewer cliques. Dulwich is a beautiful British school very well-situated if you plan to live in Jinqiao and many expat sports events make use of their facilities.

Have you any idea where you would be staying at, in a house or a flat etc?

We are happy with the curriculum and the population mix in both schools. The plus point for DCS is that both boys will be in the same campus and it helps to settle in; only thing is that there is a waitlist. YCIS is also good but the boys will be in different campuses. We have looked at various estates and we have shortlisted Yanlord Town. Waiting to find an apartment unit we like.