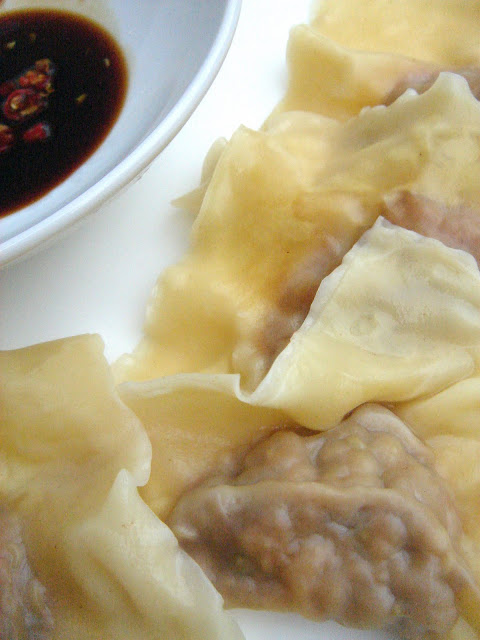 I have been asked by a number of non-Asian friends how one makes won tons and realised that it was one of those things that appears complicated to people who hadn't spent a part of their lives eating wrapping them.

Since I regularly make Pork Won Tons 云吞 for my children (the Babies do not eat seafood), I have taken the opportunity to take a few pictures during my last dumpling-making session.

When I said basic, I really meant basic. No coriander, onion, ginger, garlic or water chestnut to help improve the fare - though I do use them when the babies are not in the picture. Just fill your dumplings the way you want them.

I always prepare the filling at least a few hours in advance so that it has the time to absorb all of its seasonings. It is also easier to wrap this way. 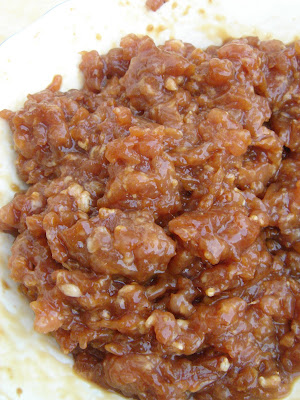 Make a well in the meat and break an egg into it. Stir with a pair of chopsticks to mix it well. Mix in the cornstarch (about 2 tsp for 250g of meat). Cover the bowl with clingwrap and leave in the fridge for a few hours. 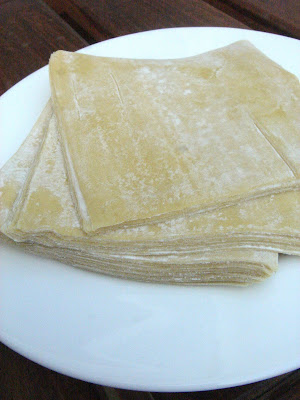 I only use cold water to seal my won ton wrappers as they are usually well-floured. What is important is not to put in too much filling, and to use your fingers to press out any air pockets so that the won ton doesn't burst/tear during the cooking. This applies to making raviolis and tortellonis too, for example. 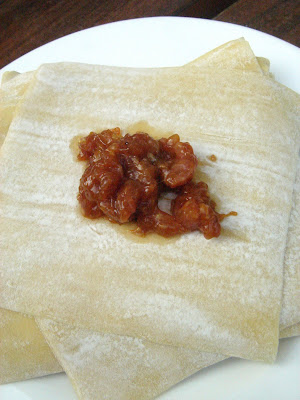 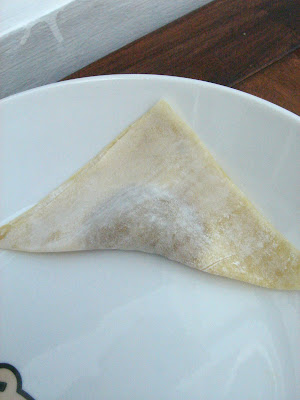 Basically put a small spoonful of the filling in the middle of the wrapper. Dip one finger in a bowl of cold water and wet 2 sides of the wrapper so that it could be folded and firmly sealed into a triangle or rectangle. Other shapes could of course be used, I usually stick to triangles especially when I fry my won tons because I prefer to shallow-fry. 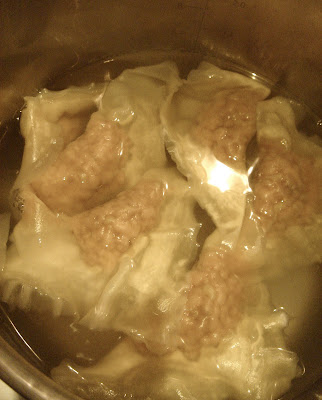 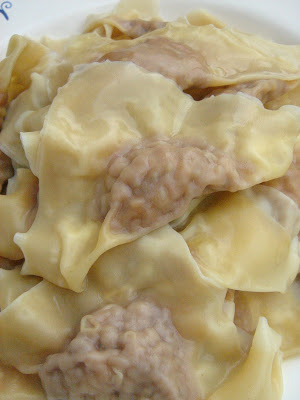 If boiling them, bring a pot of lightly salted water to boil, then lower the heat to medium. Place a few won tons into the water at a time so that they do not stick together. I use medium heat so that the wrapper will not break and the meat will have the time to be cooked through. 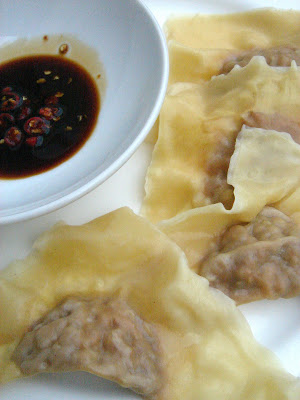 The won tons are usually ready when they start to float and the skins turn transparent. Fish them out and set aside. One can eat them just like that with a dipping sauce, use them in a soup or accompany them with noodles. For some reason my children adore them.
Publié par Beau Lotus 涟 à 11:34