London with the Kids 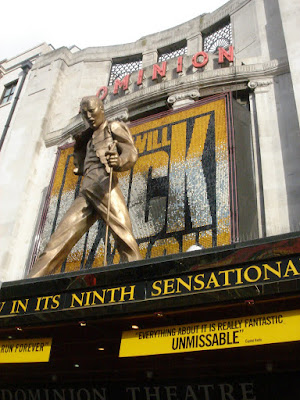 We Will Rock You @ Dominion Theatre
After Legoland, we returned to London by train and checked into our lovely hotel in Bayswater - my favourite neighbourhood in West London. The 3* hotel is beautifully situated in Kensington Gardens Square just behind Whiteleys and therefore within walking distance to both Bayswater and Queensway tube stations. It was newly-renovated, comfortable and reasonably-priced for London. The girls working at reception were mostly from Sardegna and were helpful and fluent in a few languages. 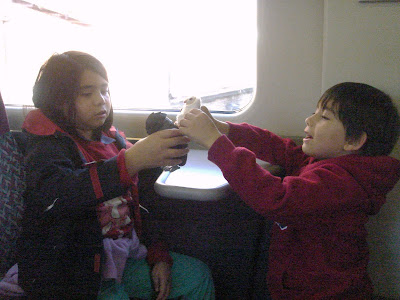 Babies playing on the Stansted Express to London
That Wednesday, we met Hub in Chinatown for lunch. No, you didn't hear me wrong. Hub came to London with a colleague for an important meeting and met us for lunch. We had tim sum at New World which while efficient and charming because they still cart their tim sum, was a bit too unrefined for my taste. The tim sum often had thick wrappers and the filling was not tasty enough.
We went our own ways after lunch and while the Teenager was watching a musical (We Will Rock You) at Dominion Theatre, I brought the Babies to Hamleys to look at toys. It was very crowded, all 5-6 floors of it, making me lose all desire to shop. We ended up buying all the toys at Harrods the next day. Babinou wanted a remote-controlled helicopter and Babinette a soft toy plus this toy hamster that comes with its own car, boat, house etc. I ended up buying 2 helicopters (2-for-70£ offer), the hamster and its dunno-what, Paddington Bear and a book about him, some flying UFO from the Science Museum collection and magic cards (for the Teenager). The Teenager was hoping that we would also buy him a PS3 console, but I didn't have space left in my luggage (especially after all the DVDs he had chosen) so we ended up buying him that when we returned to Modena. Though I have to put it on record that he didn't deserve it at all.
You understand now why kids who had never been to London before (except the Teenager) had this sudden passion for the city. It wasn't for its museums or fantastic sights; It was definitely for its restaurants and (toy/music) shops. They kept asking me when we would be going to Harrods. Then Babinou decided that he needed a new pair of shoes and we had to hunt for them in the boutiques. And next thing you know Babinette got herself a new wardrobe. What did I get? Believe it or not - nothing.
Dinner that evening was at Gold Mine. The Teenager insisted as he loved our dinner there when we were last in London (in June). I must say that we ate really well, the food (Cantonese) was lovely. After dinner my old high school friend KA came to visit us in our hotel room. He's currently in London doing his Masters so we had the chance to catch up a little. 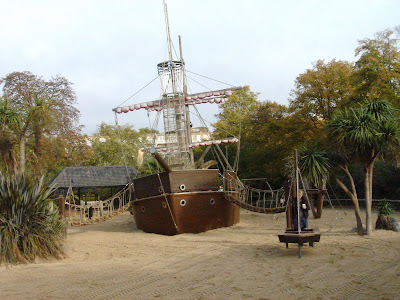 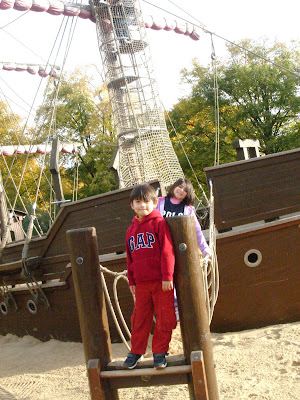 Princess Diana Memorial Playground
Thursday was packed. We started out with the Princess Diana Memorial Playground in Kensington Gardens, then we walked through the park to catch a bus to Harrods. The kids loved the bus ride. We had lunch at Wagamama's (after the shopping) which honestly was a total let-down. I first ate in the restaurant a few years ago and had enjoyed the experience. Since then it has gone downhill, the food was so horrible Babinou refused to touch his. The so-called sticky rice was unrecognisable, the Japanese curry nothing like any decent ones that I've ever eaten and the ramen soups were uninteresting. Yucks. We should have skipped lunch and spent more time in the museums instead. 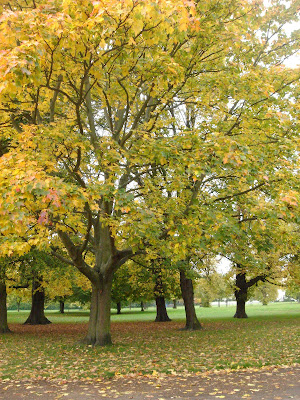 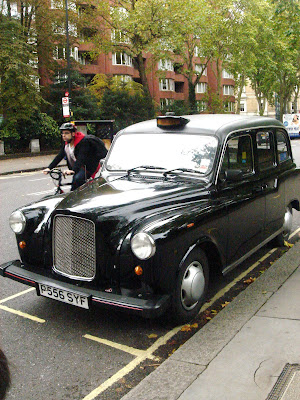 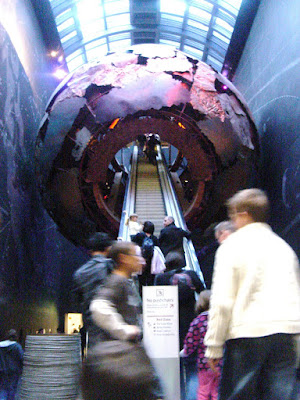 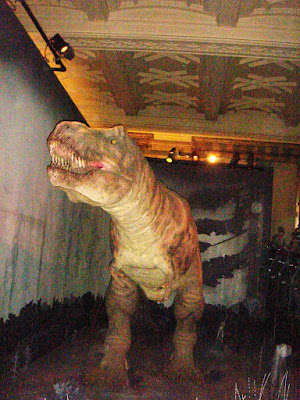 The moving T-Rex in the Natural History Museum
Dinner was with Wendy and her family at Bugis Street Brasserie in the Millennium Hotel in Gloucester Road. It served Singapore and Chinese food so we went there to have our fix of Hainanese Chicken Rice, Satay, Hor Fun etc. Everything was quite good except for the Malaysian Chicken Curry which tasted of nothing but raw curry powder. Nice to have met up with them, especially with little M who has grown so much since I last saw him. 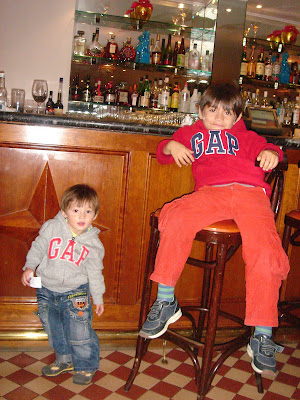 almost 2 vs almost 7
On our last day we did a spot of last-minute shopping at Whiteleys before lunching at Royal China. The tim sum there was certainly tastier and much more refined than at New World. Turn up the minute it opens if you want to have a table as there was a queue outside the restaurant even before it opened.
All in all it was a good trip and everyone was happy. I do not know when I'll get the chance to visit London again, but Hub did sort of promise that if I could arrange for the kids to be looked after when we're in our next destination, he wouldn't be against me flying back to Europe on my own for a solo break.
London House Hotel
81 Kensington Gardens Square
Tel : 207 243 1810
Tube : Bayswater
New World
1 Gerrard Place
Tel : 020 7734 0396
Tube : Leicester Square
Hamleys London
188 Regent Street
Tube : Oxford Circus
Gold Mine
102 Queensway
Tel : 020 7792 8331
Tube : Bayswater
Bugis Street Brasserie
Millennium Gloucester Hotel
4 -18 Harrington Gardens
Tel : 0207 331 6211
Tube : Gloucester Road

Lotus, oh no, my 6th sense tells me that you are moving to China, Shanghai??!! OK, I may be wrong here.

But still Shanghai is the greatest city on Earth. For Sporeans, we are no where close to them in business & economic clout, its a great happening city.

Let us know who guessed right when the time comes. Best wishes for the relocation. Though it would be a big hassle packing up.

oooh, that's my guess too, anonymous above. i'm also waiting to know :P all the best where you and family go to next :)

Shanghai is a nice city but I will NOT say it is the greatest city on Earth. There are so many cities who can easily rival Shanghai so to say it is the GREATEST is truly exaggerating.

I can't even comment since I've never been to Shanghai.

But heard it's polluted and very very expensive. And also amazingly vibrant and happening.

Otherwise I'm starting to pack indeed. In that I'm starting to throw out my rubbish so that the packers wouldn't pack and move them. I only have a few weeks to do this, so time is running out, I'm very stressed out.

Thank you for your good wishes. From the look of things you'll love my next destination.